Sometimes when the Moon orbits the Earth, the Moon moves between the Sun and Earth. When this happens, the Moon blocks the light of the Sun from reaching Earth. This causes an eclipse of the Sun, or a solar eclipse. During a solar eclipse, the Moon casts a shadow onto Earth.

There are three main types of solar eclipses:

This happens when the Sun, Moon and Earth are not exactly aligned. The Sun appears to have a dark shadow on a small part of its surface. This creates what looks like a ring around the Moon. 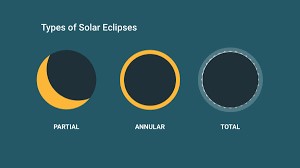 During a solar eclipse, the Moon casts two shadows on Earth. The Moon moves in an orbit around Earth. At the same time, Earth orbits the Sun. Sometimes Earth moves between the Sun and the Moon. When this happens, Earth blocks the sunlight that normally is reflected by the Moon. (This sunlight is what causes the Moon to shine.) Instead of light hitting the Moon’s surface, Earth’s shadow falls on the Moon. This is an eclipse of the Moon, or a lunar eclipse. A lunar eclipse can occur only when the Moon is full. 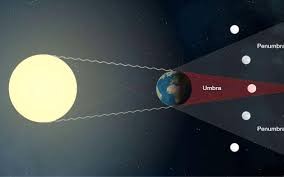