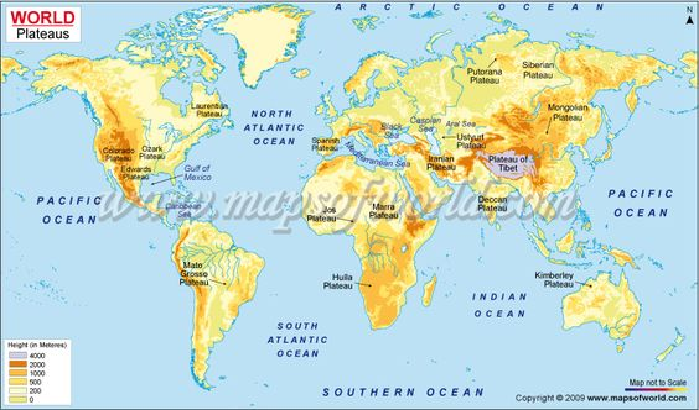 The Tibetan plateau– this is the highest, largest and most famous plateau in the world; it is located in South-Central Asia and Stretches through the countries of Tibet, China, and India. It is 1,000 km. north to south and 2,000 km. east to west and covers an area of 2,500,000km2(970,000sq mi); with a flat valley floor which at about 16,000 feet above sea level.

The Antarctic Plateau–This plateau is located in Central Antarctica and cuts across parts of the South Pole and the Amundsen Scott Station. This plateau covers an area of 1,000km2and has its highest elevation of about 3,000m above sea level.

The Colorado Plateau– TheColorado Plateau includes Utah, Arizona, and New Mexico. It is divided by the Colorado River and the Grand Canyon. It is the largest plateau in America, and it covers an area of 337,000km2and its highest elevation is about 2,450m above sea level.

Table Mountain– Table Mountainis a prominent landform located in Cape Town in South Africa. It is located at the northern end of the Sandstone Mountain Range. To its south is the part of the range known as the Back Table. It is a level plateau measuring 3m from side to side.

TheDeccan Plateau– The Deccan Plateau covers an area of 500,000km2; it is a large plateau, which cuts across eight states of India. It is bordered by two mountain ranges, the Western Ghats and the Eastern, it is 100m in the north, but higher in the south.