There are two main ideas, developed in the mid-19th century, on the way isostasy acts to support mountain masses. 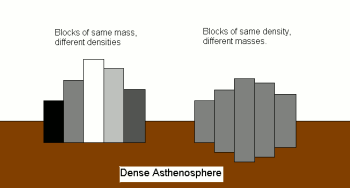 Both theories rely on the presumed existence of a denser fluid or plastic layer on which the rocky lithosphere floats. This layer is now called the asthenosphere, and was verified in the mid-20th century to be present everywhere on Earth due to analysis of earthquakes – seismic waves, whose speed decrease with the softness of the medium, pass relatively slowly through the asthenosphere.

Both theories predict a relative deficiency of mass under high mountains, but Airy’s theory is now known to be a better explanation of mountains within continental regions, whereas Pratt’s theory essentially explains the difference between continents and oceans, since the continent crust is largely of granitic compostion which is less dense than the basaltic ocean basin.

Difference between Airy and Pratt’s views on Isostasy