The savanna biome, which is a type of grassland biome, consists of areas of open grassland with very few trees. There are two kinds of savannas: tropical and semi-tropical savannas. 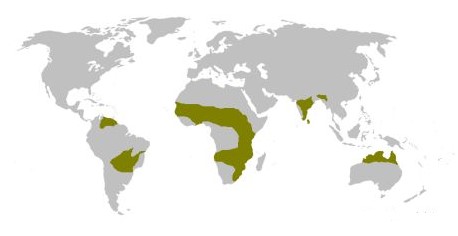 The Australian deserts consist of a collection of lowlands arid eco-regions in the heartland of Australia. They are hardly inhabited, and their average population density is lower than one person per square kilometer. Of all the deserts in the world, Australian deserts have the lowest human population, by far.

These desert biomes are located in Sub-Saharan Africa, including the southern fringe of the Arabian Peninsula. The biome receives a lot of pressure from humans, particularly in Madagascar and the horn of Africa.

The Indo-Malay region consists of 2 hot lowlands including the Indus Valley and the Thar. These deserts top the world deserts regarding human footprint.

Those located in South America cover an area of about 684, 000 million square miles. However, only 6 percent of this total area is protected.

These deserts cover an estimated area of 1.04 million square miles in North America. Due to the expansion of urban corporations like Phoenix in the U.S., their average population is relatively high.

This domain concentrates the largest range of desserts in the entire world, covering an area of a staggering 9.9 million square miles. That’s, essentially, 63% of all deserts in the world. These deserts are famous for their extreme dryness and sheer inaccessibility. The Sahara desert in Africa covers an area of about 9.9 square miles or approximately 10% of the African continent. On the flip side, the deserts located in the Central area are characterized by folded mountains, high landscape heterogeneity, as well as enclosed basins.