4. How an IPS officer used soft policing to crack down on illegal hooch

4. Appointments of judges in High Courts

What should India do for a successful presidency?

Q. The long sustained image of India as a leader of the oppressed and marginalized nations has disappeared on account of its newfound role in the emerging global order.’ Elaborate(UPSC 2019)

Which of the following is/are G20 members? What is ‘Safe Harbour’?

In the US, social media companies enjoy special protection under US’ the Communications Decency Act (CDA). It is similar to Section 79 of India’s Information Technology Act, 2000, (IT Act) which classifies social media platforms as intermediaries and broadly shields them from legal action based on content users post on their platform.

Since platforms cannot control at the first instance what users post on their site, they should not be held legally liable for any objectionable content they host as long as they agree to take such content down when flagged by the government or various courts.

Although tech platforms can help keep us connected, create a vibrant marketplace of ideas, and open up new opportunities for bringing products and services to market, they can also divide us and wreak serious real-world harms

Key principles to keep the power of social media in check (by the US):

However, Social media companies have objected to some of the provisions in the IT Rules, as it will dilute the encryption security on its platform and could compromise the personal messages of millions of Indians.

Social Media and Law of Land

Q. This is an important topic for those giving Mains this time. Do keep a note on it. Relate it with the Right to Free speech Vs State surveillance.

Q. Social media needs regulations but not to the extent that it is difficult for them to do business in India. Comment

Anvi Vijay Zanzarukia, popularly known as ‘Rubber Girl’, who has made a name for herself in Yogasana through her hard work and resourcefulness despite her physical and mental disabilities, has been awarded the Pradhan Mantri Rashtriya Bal Puraskar.

Anvi means the girl who is born with many illnesses. Anvi has lived with three health challenges since birth — “congenital heart defect” for which she has undergone open-heart surgery, “TRISOMY 21” with 75% intellectual disability and Hirschsprung’s disease, a condition that affects the large intestine (colon) and causes problems with passing stool.

Anvi remains a role model for all disabled children. She has won gold medals in various state and national-level championships in yoga through her determination and hard work. And the important thing is that she has won all these awards by competing with normal children i.e. healthy children, as there is no separate category for mentally handicapped children in yoga. 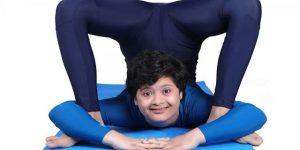 In an interesting turn of events, a Kerala-based start-up did something out-of-the-box while receiving their loan documents from bank employees. They brought a saree-clad robot to receive the documents.

A video of the event was also shared online and has stunned people.

CEO of ASIMOV Robotics Pvt Ltd, the startup that received the loan, replied to the post. He tweeted a video of the same robot singing a traditional song. “Here she sings the traditional boat song,” The bus is furnished with detachable seating, shelves and storage to allow for free creative movement. Art, craft, musical instruments, library books and audio-visual systems, and permanent art and craft teachers will be present on the bus.

The bus will be travelling across Bengaluru and stop by Anganwadis where children will be engaged for one hour in activities related to theatre, music, art, and culture. When Tejaswi Satpute, a 2012-batch IPS officer was posted in Solapur (Rural) as Superintendent of Police in October 2020, the region had acquired a reputation as the primary supplier of hooch to at least nine districts in the state.

Satpute launched ‘Operation Parivartan’, a four-point action plan that combined soft policing methods such as counselling with a concerted crackdown on the haath bhattis or the hand-operated illicit liquor distilleries in the police district.

A year later, nearly 80 per cent of the haath-bhattis in Solapur (Rural) have shut down and over 650 families involved in the trade have been rehabilitated. According to the latest NHRC data, at least 17,146 people were reported to have died in judicial/police custody – nearly five per day, on average – in cases registered in the decade up to March 2020.

Direction: You may note down a few points.

Reasons for stress and anxiety: Exam and peer pressure, Results-pressure, a decline in satisfaction with personal and school life, parental expectations.

A Varanasi district court dismissed an application filed by the Anjuman Intezamia Masjid Committee challenging the maintainability of the suit filed by Hindu women seeking the right to worship Hindu deities within the Gyanvapi mosque premises.

The Gyanvapi Mosque is located in Banaras, Uttar Pradesh, India. It was constructed by Aurangzeb in 1669 and is believed to have been made upon the demolition of an older Shiva temple.

Appointments of judges in High Courts

Directions: Important for Prelims and mains, can be asked directly in prelims

Directions: Important for Prelims and mains, you can use it as an example of India’s role in the protection of minorities in neighbouring countries What is the 103rd Amendment?

Context: Russian crude is priced at a discount and the G7 and EU want to cap the price, to keep down Russian oil revenue.

How it will work?

G7 and EU countries will decide a ‘price’ for Russian Oil and petroleum buyers would make “attestations” to providers saying they bought Russian petroleum at or below the cap. If they don’t adhere to it, they will be denied services including insurance, finance, brokering and navigation to oil cargoes priced above the cap.

The benefit of a price cap: It will cut the price Russia receives for oil without reducing its petroleum exports to world consumers.

Issues: There is no consensus on what should be the cap among G7+EU countries. Russia may withhold exports to countries that enforce the cap, and fears about the threat could cause petroleum markets to rise.

Context: India’s foreign exchange reserves declined to $553.1 billion in the week ended September 2, their lowest since October 2020 and down by $8 billion from the previous week.

Reasons behind the Decline:

Basics: Foreign Exchange Reserves are cash and other reserve assets such as gold held by a central bank or other monetary authority that are primarily available to balance payments of the country, influence the foreign exchange rate of its currency, and to maintain confidence in financial markets.

Direction: It is one of the important schemes for fisheries. Do keep a few points handy on it.

Context: Recently, the 2nd anniversary of PMMSY has been celebrated (launched in 2020)

Aim: To bring about a blue revolution through sustainable and responsible development of the fisheries sector in India.

Achievements: Fish production and exports have reached an all-time high (over 74% contribution by inland fisheries and 26% by marine)

India is 2nd largest fish-producing country (over 7.5% of the global production in 2021)

Context: A report by the advisory body Central Electricity Authority (CEA) has said that India may need additional up to 28GW of coal-fired power generation capacity by 2032 apart from the 25GW thermal projects that are under construction

The CEA has put up the ‘Draft National Electricity Plan (Vol-I Generation) ‘for feedback.

As per the Electricity Act, 2003, CEA has to prepare the National Electricity Plan once in five years.

India is the third largest greenhouse gas emitter but it’s per capita emission is very low.