1. Bill to ban funding of weapons of mass destruction 2022

3. Budget Allocation and Utilization of Funds under the National Ayush Mission

4. Status of coal reserves in India

What are Weapons of Mass Destruction (WMD)?

Efforts to control the spread of WMD are enshrined in international agreements such as:

Q. In what ways would the ongoing U.S-Iran Nuclear Pact Controversy affect the national interest of India? How should India respond to this situation? (UPSC 2019)

With reference to ‘Organization for the Prohibition of Chemical Weapons (OPCW)’, consider the following statements: (UPSC 2016) Q. China is using its economic relations and positive trade surplus as tools to develop potential military power status in Asia’. In the light of this statement, discuss its impact on India as her neighbour. (UPSC 2017)

Which of the following countries claims the South China Sea? 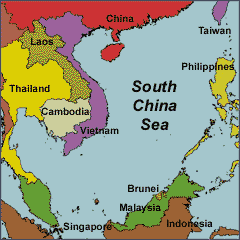 Budget Allocation and Utilization of Funds under the National Ayush Mission

●     Launched in September 2014 by the Department of AYUSH under the Ministry of Health and Family Welfare, during the 12th Plan for implementation through States/UTs.

●     Now, it is implemented by the Ministry of Ayush.

●     The scheme involves expansion of the AYUSH sector to promote holistic health of Indians.

●     The Mission addresses the gaps in health services through supporting the efforts of State/UT Governments for providing AYUSH health services/education in the country, particularly in vulnerable and far-flung areas. Which of the following is/are obligatory components of the National Ayush Mission?

Direction: This was already discussed in the  Previous Article, 1-2 points extra have been added from Jai Ram Ramesh’s article.

The Antarctic treaty (signed in 1959 and implemented in 1961) made it mandatory for the 54 signatory countries to specific laws governing territories on which their stations are located. India signed the treaty in 1983 and therefore a law was needed to preserve the pristine Antarctic environment and ocean around it.

Initially, India was left out of 1959’s Antarctica Treaty, but it made a maiden voyage in 1982 (Under Operation Gangotri)

The issue of a polar research vessel still needs to be addressed immediately. So far, India has been chartering such ships from countries like Russia and Norway while China has raced ahead and has two of its own.

India and the Arctic

Q. Throw light on the Indian interests in the Antarctic region. Analyze the role that Indian Antarctic Bill, 2022 can play in to protecting the Antarctic environment and regulating activities in the region. (250 Words)

(a) Presence of prominent tropospheric turbulence; and inflow of chlorofluorocarbons

(b) Presence of prominent polar front and stratospheric clouds; and inflow of chlorofluorocarbons

(c) Absence of polar front and stratospheric clouds; and inflow of methane and chlorofluorocarbons.

(d) Increased temperature in the polar region due to global warming

Context: Based on yesterday’s editorial article (The Live Mint) “Key lessons from public-private efforts will help us eliminate TB”.

Direction: Few examples/Case studies can be taken from the article. It is meant solely from Mains perspective.

The private sector has the potential of providing disruptive innovation for serving the public health goals of the Central and State governments in India.  According to National Prevalence Survey, almost half of all patients with TB symptoms seek care in the private sector.

The Ayushman Bharat Digital Mission (ABDM), can help in achieving universal health coverage, quality healthcare for all, and also eliminating Tuberculosis (TB). This program aims to digitize the country’s healthcare ecosystem and to enable the creation of an enabling ecosystem for fostering public-private collaborations.

Q. Public-private partnership (PPP) model in the healthcare system will pool in the expertise and finances of the private sector with the access and subsidies of the public sector. Is PPP in healthcare the panacea for India’s healthcare woes? Critically analyse. (250 Words)

(a) ASEAN initiative to upgrade infrastructure in Asia and financed by credit from the Asian Development Bank.

(b) World Bank collaboration that facilitates the preparation and structuring of complex infrastructure Public-Private Partnerships (PPPs) to enable mobilization of the private sector and institutional investor capital.

(c) Collaboration among the major banks of the world working with the OECD and focused on expanding the set of infrastructure projects that have the potential to mobilize private investment.

(d) UNCTAD-funded initiative that seeks to finance and facilitate infrastructure development in the world.

The Global Infrastructure Facility (GIF) is a global, open platform that facilitates the preparation and structuring of complex infrastructure public-private partnerships (PPPs) to enable the mobilization of the private sector and institutional investor capital.

Education Ministry will convert National Rail and Transportation Institute (NRTU) into Gati Shakti University to meet the need for talent in the transportation sector. This is an important example of sector-specific training.

Direction: Do remember different types of banks, their function and some parameters.

Context: Government has recently reviewed the financial and operational reforms for RRBs Context: GST collection has risen by 28% every year (reached about 1.5 lakh cr in July this year)

The Goods and Services Tax (GST) (by 101st C.A Act) is a value-added tax levied on most goods and services sold for domestic consumption. It is based on the principle of destination-based consumption taxation as against the previous principle of origin-based taxation. Status of coal reserves in India

Direction: This has been taken from Business standards, just go through it once.

Context: According to the Inventory of India published by the Geological Survey of India, the total assessed geological coal resource in the country is 352 billion tonnes, putting it among the nations with the highest reserves (currently 5th placed)

Despite high reserve, India has to import coal because: Demand outpacing production, poor finances of DICOMS, poor logistics, the private sector is a marginal player currently.

Suggestions: Plan for coal as it will remain the mainstay of thermal power generation, utilize domestic coal reserves present across the country, and utilize technologies like coal liquefaction and carbon capture, storage, and utilization (CCUS) technologies.

Context: ICMR has released the manual which seeks to address problems associated with irrational use of medicines, over and under-diagnosis and poor referral practices, among others.

Direction: Not so important, just glance at it once.

Developing STW is a mission mode project of the Indian Council of Medical Research for common and serious diseases encountered by the treating physicians at all levels of healthcare systems with an aim to guide them for management and encourage rational use of drugs, diagnostics and other healthcare services.

‘Agriculture’ is a state subject

Context: This is from the y’day editorial article. Just go through it once.

Status: India has a livestock population of 1.6 billion and approximately 280 million farmers rely on livestock and related industries for livelihood. Context: The Yojana was discussed in Parliament

Aim: To create 400 Urban Forest and 200 Nagar Vatikas in at least 20 hectares of land in the urban areas in the next five years (2020-2025) (on existing forest land or any other vacant land by Urban local bodies) Context: India (Air force) will be participating in an air combat exercise in Australia Context: The US military used its ‘secret weapon’ — the Hellfire R9X missile (‘Ninja missile’)– to kill Al Qaeda chief Ayman al-Zawahiri on the balcony of a safe house in Kabul.

Better known in military circles as the AGM-114 R9X, the Hellfire R9X is a US-origin missile known to cause minimum collateral damage while engaging individual targets.

It weighs about 45 kg and the missile can also be launched from helicopters, aircraft and Humvees. The range of these missiles varies from 500 metres to 11 km.

Al-Zawahiri, an Egyptian surgeon who had a $25 million bounty on his head, had helped coordinate September 11, 2001, attacks that had killed nearly 3,000 people. Astrobee also consists of a system that serves as a research platform that can be outfitted and programmed to conduct microgravity experiments. Thus, it will help to learn more about how robotics can benefit astronauts in space.

The three free-flying robots are named Honey, Queen, and Bumble. The robots are shaped like cubes 12.5 inches wide.

The Astrobee system consists of three cube-shaped robots, some software and a docking charging station used for recharging. They are about 32 centimetres wide.

The three robots propel themselves using electric fans that allow them to fly through the microgravity environment of the International Space Station.

The Astrobee robots are built on the knowledge acquired from operating SPHERES (Synchronised Position Hold, Engage, Reorient, Experimental Satellite) robots which have been operating on the International Space Station for over a decade.