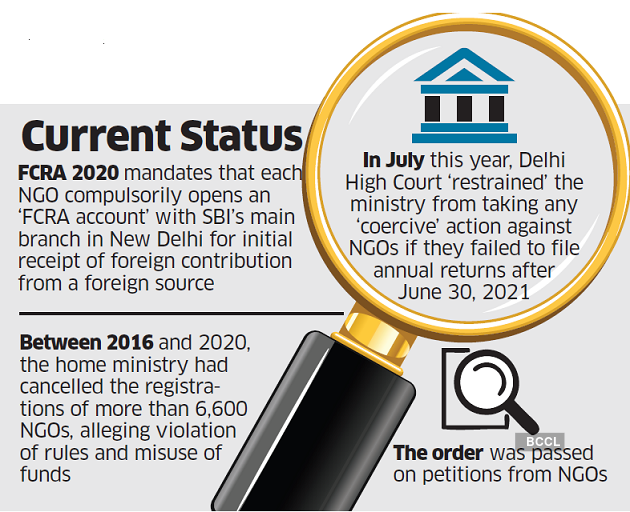 The Union Home Ministry (MHA) said that recently, it has refused to renew the FCRA registration of Missionaries of Charity (MoC), a Catholic religious congregation set up by Nobel laureate Mother Teresa, as “some adverse inputs were noticed.”

In 2020, the licences of 13 non-governmental organisations (NGOs) have been suspended under the Foreign Contribution (Regulation) Act (FCRA), 2010, this year. Their FCRA certificates were suspended and bank accounts frozen.

Suspension of FCRA license means that the NGO can no longer receive fresh foreign funds from donors pending a probe by the Home Ministry.

What is the FCRA?

When is a registration suspended or cancelled?

The MHA on inspection of accounts and upon receiving any adverse input against the functioning of an association can suspend the FCRA registration initially for a period of 180 days.

Till the time any decision is taken, the association cannot receive any fresh donation and cannot utilise more than 25% of the amount available in the designated bank account without permission of the MHA.

The MHA can cancel the registration of an organisation which will not be eligible for registration or grant of ‘prior permission’ for three years from the date of cancellation.

According to MHA data, since 2011 when the Act was overhauled, the registration of 20,664 associations were cancelled for violations such as misutilisation of foreign contribution, non-submission of mandatory annual returns and for diverting foreign funds for other purposes.

What about international donors?

The donors have been placed on a ‘watch list’ or in the ‘prior permission’ category, barring them from sending money to associations without the MHA’s clearance.

At a time when India is facing the crippling effects of the COVID-19 pandemic and a long-term economic crisis, the Government’s moves that have resulted in an estimated 30% drop in international non-profit contributions, only hurt the poorest and most vulnerable recipients of philanthropic efforts, particularly those by NGOs working in areas where government aid fails to reach.

Therefore, many experts argued that excessive regulation on foreign contribution may affect working of the NGOs which are helpful in implementing government schemes at the grassroots. They fill the gaps, where the government fails to do their jobs.

The regulation should not hamper sharing of resources across national boundaries essential to the functioning of a global community, and should not be discouraged unless there is reason to believe the funds are being used to aid illegal activities.