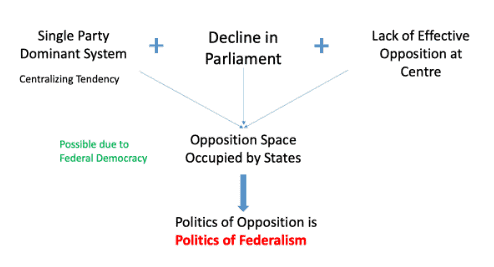 Federalism in India has always had political relevance, but except for the States Reorganisation Act, federalism has rarely been an axis of political mobilisation.

This was true even in the days of coalition politics when State politics mattered to national electoral outcomes.

Recently, several states have complained about the growing crisis of Indian federalism.

They have argued about the Ordinances and the Bills brought by the Centre which encroaches on their area of legislation, which is an assault on the federal structure of the Constitution.

However, problems existing are:

Divide among States: A real impediment to collective action:

Fiscal management by the states:

Finally, beyond principles, a renewed politics of federalism is also an electoral necessity.

No coalition has succeeded, in the long term, without a glue that binds it.

Forging a political consensus on federalism can be that glue. But this would require immense patience and maturity from regional parties.

Our focus must continue to be on successfully engaging with health, food security and livelihood issues.

The democratic capability of the Indian state will be tested with each new wave of the pandemic.

Collaborative federalism that chooses to ignore asymmetries in power will only strengthen the democratic choices for better governance.

Cooperation between the Centre and States is key to success and the fight would very much depend upon the availability of resources.