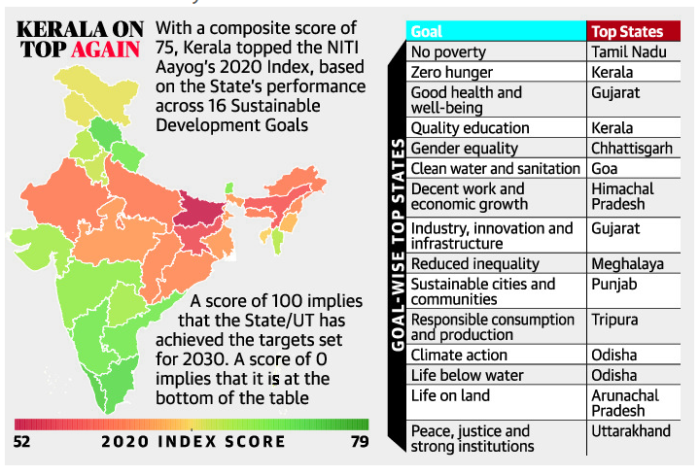 India saw significant improvement in the Sustainable Development Goals (SDGs) related to clean energy, urban development and health in 2020, according to the NITI Aayog’s 2020 SDG Index.

However, there has been a major decline in the areas of industry, innovation and infrastructure as well as decent work and economic growth.

The SDG index evaluates the progress of states and union territories on social, economic and environmental criteria and is released every year by the government.

At the other end of the scale, Bihar, Jharkhand and Assam were the worst performing States. However, all States showed some improvement from last year’s scores, with Mizoram and Haryana seeing the biggest gains.

What is SDG India Index?

First launched in December 2018, the index has become the primary tool for monitoring progress on the SDGs in India.

It has also fostered competition among the states and UTs by ranking them on the global goals.

The index is a key tool for focused policy dialogue, formulation and implementation through development actions, in line with the global SDG framework.

It helps in identifying crucial gaps related to tracking the SDGs and the need for India to develop its statistical systems.

Holistic developmental indicators have been used:

As another milestone in the SDG localisation journey of the country, the Index is presently being adapted and developed by NITI Aayogatthe granular level of districts for the upcoming North Eastern Region District SDG Index.

The index is designed to function as a tool for focused policy dialogue, formulation and implementation through development actions, which are pegged to the globally recognisable metric of the SDG framework.

India’s success in adopting, implementing, and monitoring SDGs stands as a testament to the principle of cooperative federalism, envisioned by the government of India and promoted by NITI Aayog.

NITI Aayog has the twin mandate to oversee the adoption and monitoring of the SDGs in the country, and also promote competitive and cooperative federalism among States and UTs.

The index represents the articulation of the comprehensive nature of the Global Goals under the 2030 Agenda while being attuned to the national priorities.

The modular nature of the index has become a policy tool and a ready reckoner for gauging progress of States and UTs on the expansive nature of the Goals, including health, education, gender, economic growth, institutions, climate change and environment.