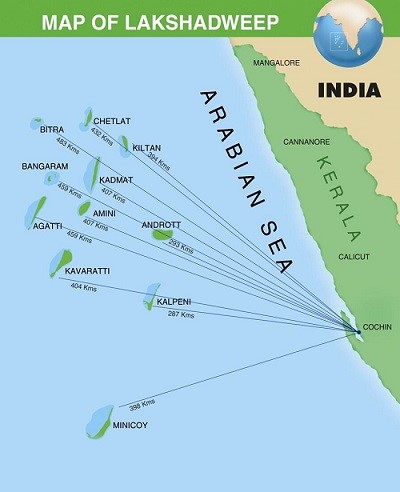 Praful Khoda Patel, who took additional charge as Administrator, Lakshadweep, in December last year, is in the news for having introduced a slew of draft legislation that will have a wide-ranging impact on the islands:

Addressing the media in the face of widespread criticism of these measures, Mr. Patel says he intends to develop Lakshadweep like neighbouring Maldives, “a renowned international tourist destination”.

Adding to this, the Collector of Lakshadweep says, It was only in 2017 that the Centre constituted the Island Development Agency under the Home Minister for the development of the islands.

India’s smallest Union Territory, Lakshadweep is an archipelago consisting of 36 islands with an area of 32 sq km. It is directly under the control of the Centre through an administrator.

The Capital is Kavaratti and it is also the principal town of the UT. Pitti island, which is uninhabited, has a bird sanctuary.

There are three main group of islands:

Amindivi Islands are the northernmost while Minicoy island is the southernmost. All are tiny islands of coral origin (Atoll) and are surrounded by fringing reefs.

Critics argued: A ‘no’ to the Maldives model:

A clear policy must include conservation and natural resource management arrived at after wide consultation, eminently possible within the existing infrastructure of the Union Territory, and also taking into account climatic compulsions.

Maldives is hardly a suitable model. Water bungalows — an expensive concept and also hazardous to the coral favoured by the NITI Aayog, would collapse in Lakshadweep’s turbulent monsoon.

The Government should recognise the need to develop policies for enhancing employment opportunities, environment-friendly management of fisheries, sanitation, waste disposal and widening access to drinking water, with the youth, having acquired a modern education, preferring salaried jobs over pursuing traditional occupations.