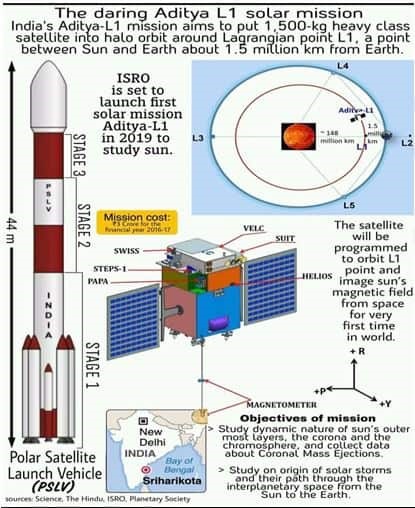 It will carry seven payloads which have been developed by various institutions across the country.

Once the mission is launched, there will be a need for a ground support centre to monitor and coordinate the work on its various payloads.

This role will be played by the ARIES facility (short for Aryabhata Research Institute for observational Sciences) which is situated near Nainital.

In January 2021, an agreement was signed to this effect based on the proposal submitted by the ARIES team of the science working group of the Aditya-L1 mission.

Why is studying the Sun important?

Halo orbit around the Lagrangian point 1 (L1) of the Sun-Earth system:

The satellite will be launched during 2019 – 2020 timeframe by PSLV-XL from Sriharikota:

Challenges in launching the mission:

How the corona gets heated to such high temperatures is still an unanswered question in solar physics.

The closest any space mission has been to the sun is NASA’s Parker Solar Probe mission which hovered at a distance of 18.6 million kilometres from the sun at a jaw-dropping speed of 3.93 lakh km per hour.

The Aditya L1 mission, unlike the Parker Solar Probe, won’t actually go anywhere near the Sun. However, unlike other satellites, it’s not going to be stuck in Earth’s lower atmosphere either.

Instead, the plan is to launch it in a halo orbit around Lagrangian Point 1 (L1).

At L1, the ISRO satellite will still be moving in orbit but its position relative to the Sun and the Earth will be stable.