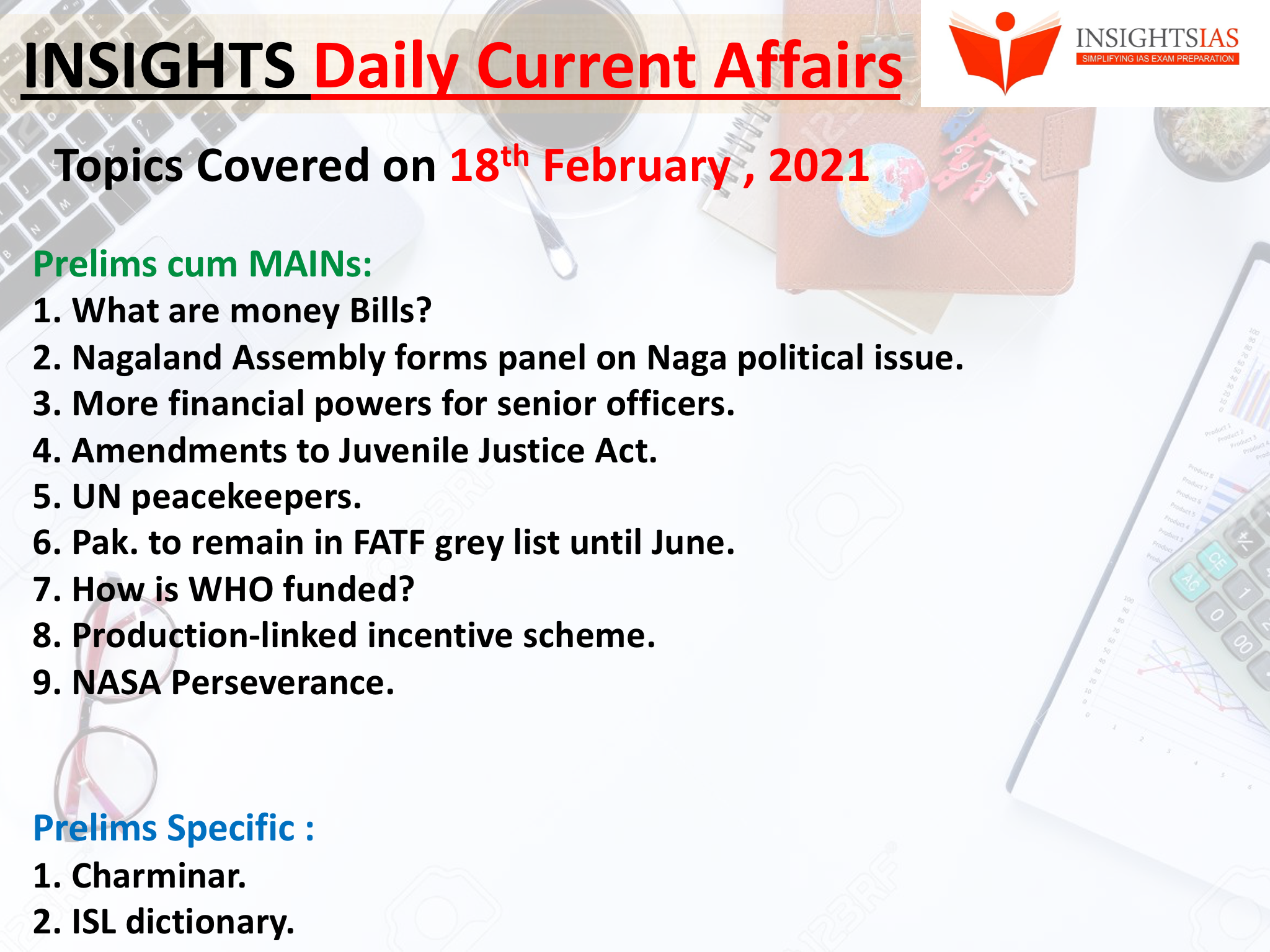 1. What are money Bills?

6. Pak. to remain in FATF grey list until June.

What are money Bills?

In a pre-emptive move, the Congress has written to Lok Sabha Speaker Om Birla, urging him not to bypass the Rajya Sabha by declaring seven key Bills, including one on the privatisation of two public sector banks, as money Bills.

What is a Money bill?

A money bill is defined by Article 110 of the Constitution, as a draft law that contains only provisions that deal with all or any of the matters listed therein.

In the event a proposed legislation contains other features, ones that are not merely incidental to the items specifically outlined, such a draft law cannot be classified as a money bill.

Article 110 further clarifies that in cases where a dispute arises over whether a bill is a money bill or not, the Lok Sabha Speaker’s decision on the issue shall be considered final. How does a money bill differ from a financial Bill? Analyze whether the process of classifying a bill as money bill needs change?

The Nagaland Assembly has formed a seven-member drafting committee on the Naga political issue that has been hanging fire for more than two decades.

The Cabinet has approved enhanced delegation of financial powers for capital procurement to senior officers below the rank of Vice-Chief of armed forces.

The delegation of power will help in the modernization of Armed forces.

It was unveiled in September 2020.

DAP 2020 defines an “Indian vendor” as a company that is owned and controlled by resident Indian citizens, with foreign direct investment (FDI) not more than 49 per cent.

The “import embargo list” of 101 items that the government had promulgated has been specifically incorporated into DAP 2020. (An embargo is a government order that restricts commerce with a specified country or the exchange of specific goods.)

The Union Cabinet has approved a slew of amendments to the Juvenile Justice (Care and Protection of Children) Act, 2015.

Pak. to remain in FATF grey list until June:

The FATF’s Plenary and Working Group meetings, scheduled to be held from February 21 to 26 in Paris, is all set to decide on Pakistan’s grey list status. However, Pakistan is unlikely to exit the Financial Action Task Force’s (FATF) ‘grey’ list until June.

Pakistan was placed on the ‘grey’ list in June 2018 and given a timeline to implement 27 action points.

The Financial Action Task Force (FATF) is an inter-governmental body established in 1989 on the initiative of the G7.

How is WHO funded?

U.S. Secretary of State Antony Blinken announced that his country would pay the World Health Organization (WHO) $200 million by the end of this month.

Need for and significance of the move:

The U.S. said it believes that multilateralism, the United Nations, the World Health Organization, are essential not just as an effective international COVID-19 health and humanitarian response but also building stronger global health capacity and security for the future.

The Union Cabinet has approved the production-linked incentive scheme for the telecom sector with an outlay of ₹12,195 crore over five years.

After a seven months’ journey from Earth, the NASA Perseverance is in its final stretch towards destination Mars.

About the Perseverance rover:

No records of chilla (a small shrine) adjacent to Charminar, says the Archaeological Survey of India (ASI). The ASI was responding to a Right to Information query.

The third edition of the digital Indian Sign Language dictionary was launched recently.

The dictionary was prepared by the Indian Sign Language Research and Training Centre under the Social Justice and Empowerment Ministry.