2. Supreme Court gives ministry a deadline for appointment of expert members to NGT.

3. First meeting between India and Luxembourg in 20 years.

1. What is Cord blood banking?

4. India now has two of world’s 100 most powerful supercomputers.

Rajasthan Government has launched a maternity benefit scheme for four districts under which mothers will get ₹6,000 for the second child. This Scheme will be called Indira Gandhi Matritva Poshan Yojana.

The scheme is a conditional cash transfer scheme for pregnant and lactating women. Discuss the significance of the Indira Gandhi Matritva Poshan Yojana.

Under Article 102 (1) and Article 191 (1) of the Constitution, an MP or an MLA (or an MLC) is barred from holding any office of profit under the Central or State government.

Role of Judiciary in defining the ‘office of profit:

The Supreme Court in Pradyut Bordoloi vs Swapan Roy (2001) outlined the four broad principles for determining whether an office attracts the constitutional disqualification. 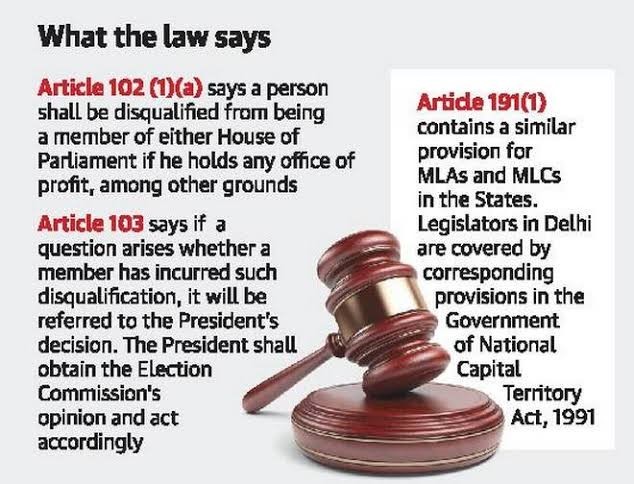 Supreme Court gives ministry a deadline for appointment of expert members to NGT:

The Supreme Court has directed the Ministry of Environment, Forest and Climate Change (MOEFCC) to hasten the process of pending appointments to vacancies in the National Green Tribunal (NGT). It has given four weeks for the process.

The petitioners had submitted that appointment of expert members are still pending before the appointment committee since September.

With the establishment of the NGT, India became the third country in the world to set up a specialised environmental tribunal, only after Australia and New Zealand, and the first developing country to do so.

Sanctioned strength: The act allows for up to 40 members (20 expert members and 20 judicial members).

Chairman: Is the administrative head of the tribunal, also serves as a judicial member and is required to be a serving or retired Chief Justice of a High Court or a judge of the Supreme Court of India.

Discuss the roles and functions of NGT.

First meeting between India and Luxembourg in 20 years:

The first meeting between India and Luxembourg in 20 years was held recently.

The three agreements that have been signed are:

Launched by Modi in September 2019 at the UN Secretary-General’s Climate Action Summit in New York, US.

It is a platform where knowledge is generated and exchanged on different aspects of disaster and climate resilience of infrastructure.

This initiative will benefit all sections of society.

Many countries, including India, have over the years developed robust disaster management practices that have helped in sharply reducing human casualties in a disaster. However, the economic costs of a disaster remain huge, mainly due to the damage caused to big infrastructure.

Discuss the objectives of the Coalition for Disaster Resilient Infrastructure (CDRI).

Mike Pompeo recently paid the first visit by a U.S. Secretary of State to an Israeli settlement in the occupied West Bank, in a parting show of solidarity with Prime Minister Benjamin Netanyahu by the outgoing Trump administration.

Mr. Pompeo’s visit departed from past policy that had kept top U.S. officials away from settlements, which Palestinians view as obstacles to a viable future State.

Palestinians accused Mr. Pompeo of helping Israel to cement its control over West Bank land that they seek for a State. The latest Asia-Pacific Economic Cooperation (APEC) forum was held online this year because of the pandemic.

It is a regional economic forum established in 1989 to leverage the growing interdependence of the Asia-Pacific.

Community Cord Blood Banking, a stem cell banking initiative introduced by LifeCell in 2017, has helped save the life of a seven-year-old girl from Nashik in Maharashtra who was suffering from aplastic anaemia.

What is Cord Blood?

Cord blood banking is the process of collecting the cord blood and extracting and cryogenically freezing its stem cells and other cells of the immune system for potential future medical use.

What Can It Be Used For?

The umbilical cord fluid is loaded with stem cells.

What is cord blood? How to- be parents are falling prey to the emotional marketing tactics by stem cell banking companies? Discuss.

The Prohibition of Employment as Manual Scavengers and their Rehabilitation Act (2013) and various judgements of Hon’ble Supreme Court expressly prohibit hazardous cleaning, i.e. manual entry into a septic tank or sewer without protective gear and observing operating procedures.

It is an intelligence alliance comprising Australia, Canada, New Zealand, the United Kingdom and the United States.

These countries are parties to the multilateral UKUSA Agreement, a treaty for joint cooperation in signals intelligence.

Origin: It began in 1946 when the United States and the United Kingdom agreed to an open exchange of intelligence on the communications of foreign nations. It was expanded when Canada joined the alliance in 1948, followed by Australia and New Zealand in 1956. India now has two of world’s 100 most powerful supercomputers:

Global information technology service provider Atos has announced that PARAM Siddhi – AI has been ranked 63 on the TOP500 ranking. This makes it India’s largest and fastest Supercomputer.

Notably, PARAM Siddhi – AI isn’t the only Indian supercomputer in the Top100 list. Pratyush that is used for weather forecasting was ranked 78th in the list.

Goal: It seeks to ensure accountability for delivering prevention services at scale in order to achieve the targets of the 2016 Political Declaration on Ending AIDS, including a 75% reduction in HIV infections towards fewer than 500 000 infections by 2020, and to ending the AIDS epidemic by 2030.