1. What is a bulk drug park, and why does Himachal Pradesh want one?

3. What is Army Aviation Corps?

Observed on 31st October across the nation.

The government, in 2014, decided to observe Sardar Patel Jayanti Day as Ekta Diwas. This occasion provides an opportunity to re-affirm the inherent strength and resilience of the nation to withstand the threats to its unity, integrity and security.

Sardar Patel is credited with uniting all 562 princely states in pre-independent India to build the Republic of India.

Who gave him the title “Sardar”?

Women of Bardoli bestowed the title ‘Sardar’ on Vallabhbhai Patel, which means ‘a Chief or a Leader’. Sardar Vallabh Bhai Patel was a selfless leader, who had a vision for the unification of the country’s interest above all other, and shaped India’s fate with unwavering devotion. Discuss.

They are all the same thing: tropical storms. But they are known by different names in different locations.

What are the different parts of a cyclone’s structure?

The eye: The eye of the storm is the centre. It’s a relatively calm space. When the eye passes over an area, winds slow down and everything feels like it has cleared up. The part that comes after the eye usually inflicts the most damage.

The eyewall: This is where the most effective part of a cyclone rests. The eyewall houses extremely high wind speeds, causing damage to both lives and property. It is a ring of thunderstorms, and changes in the eye or the eyewall affects the storm’s intensity.

Rainbands: These are the outer parts of a cyclone where sudden bursts of rain happen. There can also be gaps betwen rainbands where no rain or wind occurs. Highlights of the new Regulation (Have a brief overview):

About the National Medical Commission:

The Centre has recently notified the 33-member NMC, which will be chaired for three years by Suresh Chandra Sharma.

Discuss the roles and functions of the newly constituted National Medical Commission (NMC).

Pakistan is planning to accord provincial status to the “so-called Gilgit-Baltistan”.

It borders China in the North, Afghanistan in the west and Kashmir in the south east.

It shares a geographical boundary with Pakistan-occupied Kashmir, and India considers it as part of the UT of Ladakh, while Pakistan sees it as a separate from PoK.

Challenges ahead for Pakistan:

What is a bulk drug park, and why does Himachal Pradesh want one?

Himachal Pradesh is vying for the allotment of a bulk drug park under a central government scheme.

The Central Government is planning to setup three such parks across the country.

It is the key ingredient of a drug or medicine, which lends it the desired therapeutic effect or produces the intended pharmacological activity.

How are APIs prepared?

They are prepared from multiple reactions involving chemicals and solvents.

India has one of the largest pharmaceutical industries in the world (third largest by volume).

But this industry largely depends on other countries, particularly China, for importing APIs, DIs and KSMs.

So, any disruptions in those countries would definitely affect the pharmaceutical industries here in India.

The Union Home Ministry has written to all States to examine and register FIRs based on the complaints received on the National Cybercrime Reporting Portal, www.cybercrime.gov.in.

Only 2.5% of total complaints registered on the portal are converted into First Information Reports (FIRs).

According to data compiled by NCRB, the number of registered cybercrimes increased by 63.5% in the year 2019 compared with the previous year’s.

Efforts by the Home Ministry to raise awareness on this:

Other Steps taken by the Government to spread awareness about cyber crimes:

Examine the role of cybersecurity in securing digital India.

What is Army Aviation Corps?

It is the youngest Corps of the Indian Army.

The Corps was raised as a separate formation on November 1 in 1986.

Composition: The AAC now draws its officers and men from all arms of the Army, including a significant number from the artillery.

Writer Paul Zacharia has been selected for the 28th Ezhuthachan Puraskaram.

A recent study has found that this asteroid could be made entirely of metal and is worth an estimated $10,000 quadrillion — more than the entire economy of Earth. The Vaishwik Bharatiya Vaigyanik (VAIBHAV) Summit is a global virtual summit of overseas and resident Indian researchers and Academicians.

Surinsar-Mansar Lakes are designated as Ramsar Convention in November 2005. 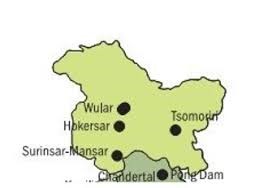