Delhi high court has ordered schools (Both Private and Government) to provide gadgets and internet access to students from economically weaker section (EWS) and disadvantaged groups (DG) categories to assist in their online education during the Covid-19 crisis.

The court passed the order over concerns that these EWS category students were unable to sustain their online studies due to a lack of resources and unavailability of laptops and mobile phones during the COVID-19 pandemic.

Why such measures are necessary? Observations made by the High Court:

The Court has made it clear that the private unaided schools will be entitled to claim reimbursement of reasonable cost for procurement of the gadget and Internet package from the government under Section 12(2) of the RTE Act.

The RTE Act aims to provide primary education to all children aged 6 to 14 years.

It enforces Education as a Fundamental Right (Article 21).

It lays down the norms and standards related to:

As per the information provided by Union Minister of Textiles, under Samarth, 18 State Governments have been allocated a training target of 3.6 lakh beneficiaries for conducting training programme in traditional and organized sectors. Also known as the ‘Scheme for Capacity Building in Textile Sector (SCBTS)’.

Implemented by the Ministry of Textiles.

September 19 marks the 60th anniversary of the Indus Water Treaty (IWT) between India and Pakistan.

It is a Water-Distribution Treaty, signed in Karachi in 1960, between India (PM Jawaharlal Nehru) and Pakistan (President Ayub Khan), brokered by the World Bank.

Who has control over what?

Water for other purposes:

Key features of the treaty: On the occasion of International Coastal Clean-Up Day (Celebrated since 1986), for the first time eight beaches of India are recommended for the coveted International eco-label, the Blue flag certification.

The eight beaches recommended are:

Shivrajpur in Gujarat, Ghoghla in Daman and Diu, Kasarkod and Padubidri in Karnataka, Kappad in Kerala, Rushikonda in Andhra Pradesh, Golden in Odisha and Radhanagar in Andaman and Nicobar Islands.

The ‘Blue Flag’ beach is an ‘eco-tourism model’ and marks out beaches as providing tourists and beachgoers clean and hygienic bathing water, facilities/amenities, a safe and healthy environment, and sustainable development of the area. 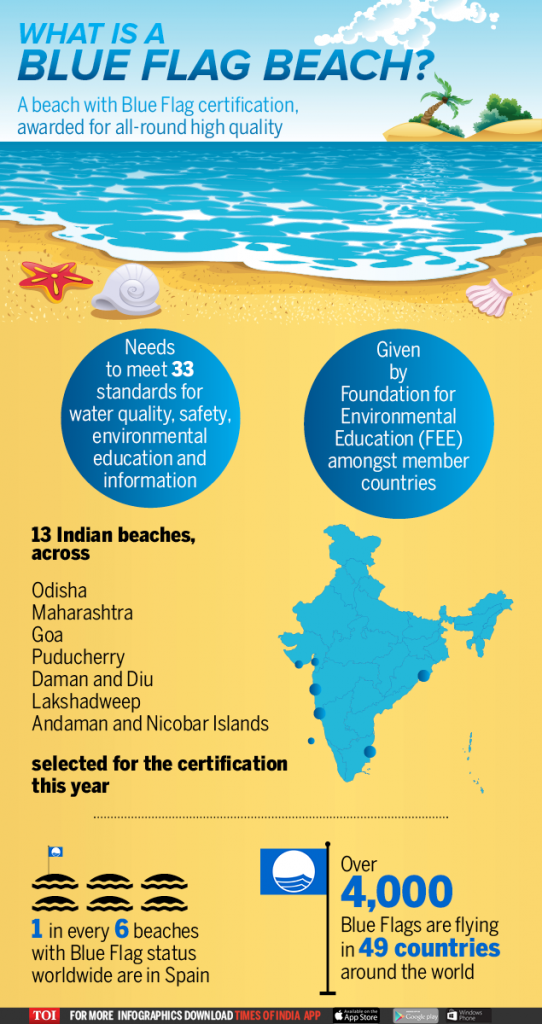 Its objective is to:

What is ICZM Project?

ICZM aims to improve livelihood of coastal communities and conserve the coastal ecosystem.

The concept of ICZM was born in 1992 during the Earth Summit of Rio de Janeiro.

Concerns over the back-to-back deaths of two sloth bears at the park.

Uniqueness of the Zoo:

The Summit is a joint effort of various Science & Technology (S&T) and Academic organisations, including Department of S&T, Defence Research and Development Organisation (DRDO).

The Indian Forest Act 1927 was amended in 2017 to remove bamboo for the category of trees.