5. Madhya Pradesh govt jobs to be reserved for state citizens.

No Audit of PM-CARES Fund: SC:

Supreme Court has delivered its judgement on PM CARES funds.

The petition was filed by an NGO named Centre for Public Interest Litigation (CPIL) had sought a direction to the Centre to transfer the funds of PM Cares Fund to the NDRF.

Highlights of the judgment:

Set up on March 28, the PM CARES Fund is a charitable trust registered under the Registration Act, 1908.

The trust does not receive any Budgetary support or any Government money.

It was constituted with an objective to extend assistance in the wake of public health emergency that is pandemic COVID-19”.

At a recent meeting, the Punjab Chief Minister asked the Central government to be cautious on the contentious Sutlej-Yamuna Link (SYL) canal issue, saying it has the potential to disturb the nation’s security.

How this issue could disturb nation’s security?

Pakistan has been making continuous attempts to foment trouble and to try and revive the separatist movement through the banned Sikhs for Justice organisation. The water issue could further destabilise the State.

Suitable amendments should be made to the proposed Inter State River Water Disputes Act to set up a new tribunal, to ensure that Punjab gets adequate water “in a just and equitable manner in keeping with its total demand and securing livelihood of the future generations.”

To enable Haryana to use its share of the waters of the Sutlej and its tributary Beas, a canal linking the Sutlej with the Yamuna, cutting across the state, was planned.

What is Haryana’s demand?

Haryana has been seeking the completion of the SYL canal to get its share of 3.5 million acre-feet of river waters. It has maintained that Punjab should comply with the 2002 and 2004 Supreme Court orders in this regard. Haryana is getting 1.62 million acre-feet of the Ravi-Beas waters. 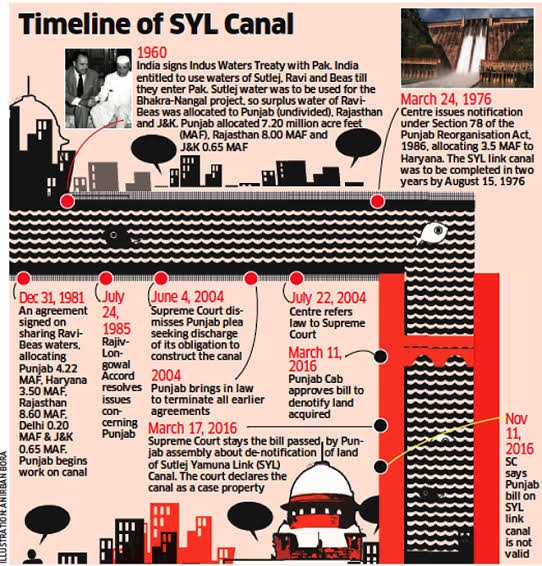 It is said that water sharing awards and agreements such as the Sutlej–Yamuna Link between Punjab and Haryana are generally politically-induced, and therefore, remain unimplemented. Do you think sharing of river water should be based on the emerging ground realities, especially geographical factors?

The Atal Rankings of Institutions on Innovation Achievements (ARIIA) 2020 has been released.

Atal Ranking of Institutions on Innovation Achievements (ARIIA) is an initiative of Ministry of Human Resource Development (MHRD) (Now, it is the Ministry of Education), Govt. of India to systematically rank all major higher educational institutions and universities in India.

For the first time, ARIIA 2020 has a special prize category for women only higher educational institutions.

Topics Covered: Awareness in the fields of IT, Space, Computers.

The report was released recently.

The index is prepared by Surfshark, a virtual private network (VPN) provider based in the British Virgin Islands.

As per the Centre for Science and Environment (CSE):

The environment ministry‘s ban on mining in areas of thick forest cover has locked away millions of tonnes of coal reserves.

According to the power ministry, coal shortage is likely to hold up new power projects of over 17,000 mw aggregate capacity. This has triggered debate among the ministries of coal, power and steel on the ‘Go, No-Go’ concept’s merits.

What are ‘No Go’ areas in coal mining?

In 2009, the environment and coal ministries had jointly placed the country’s forested areas under two categories – Go and No-Go – and imposed a ban on mining in the ‘No-Go’ zones on environmental grounds.

Is there a need for classifying ‘Go’ and ‘No Go’ areas?

The exercise is aimed at prioritising forest areas under the Forest Conservation Act, 1980.

If mining were to continue, even with afforestation and reclamation, it would not be possible to restore the regions biodiversity.

The concept has no legal standing– They are mandated neither under Forest Conservation Rules, 2003 nor under any circular issued by the ministry of environment and forests.

All India Institute of Ayurveda under Ministry of AYUSH and Delhi Police have jointly launched ‘AYURAKSHA’ for police personnel.

Indian Railways has started deploying “Ninja UAVs” (unmanned aerial vehicles) for establishing a drone-based surveillance system in a bid to intensify its security mechanism across its network.

Madhya Pradesh govt jobs to be reserved for state citizens:

Madhya Pradesh Chief Minister Shivraj Singh Chouhan has announced that government jobs in the State would now be reserved for its youth only. Necessary legal provisions will be introduced shortly.

Current Affairs of 17th and 18th July will be uploaded shortly.