1. NGT brings strict conditions for commercial use of ground water.

2. What is ammonium nitrate, which caused the massive explosion in Beirut?

The timing of the release of new map:

Let us look at the important regions now:

Where is Sir Creek? Junagadh is in coastal Gujarat. It was a part of the Kathiawar region.

It decided to join India in 1947 and the decision was formalised through a Plebiscite in 1948. This was, however, not accepted by Pakistan then, but was overtaken by the first India-Pakistan war over Kashmir that began at the end of October 1947 and continued for over a year. 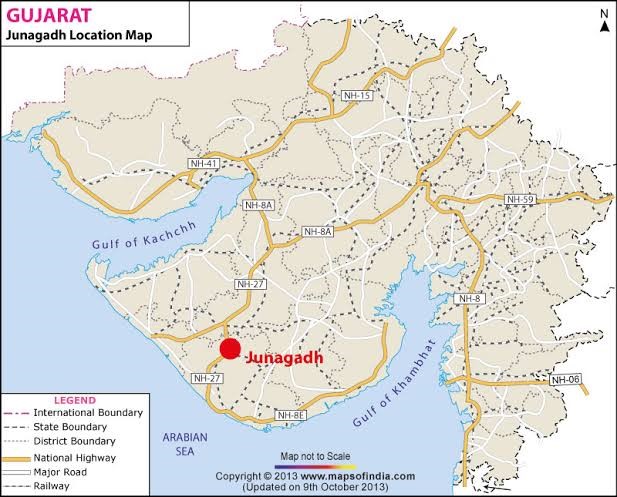 The Delhi High Court has asked Delhi Police and Zee News to respond to a plea by Trinamool Congress MP Mahua Moitra challenging the summons and framing of charges against her in a defamation case filed by the news channel and its editor.

The case relates to Ms. Moitra’s June 25, 2019 speech in Parliament on the ‘Seven Signs of Fascism’ and a TV show run by the news channel and other subsequent developments.

Zee News has filed the defamation complaint against Ms. Moitra for allegedly making statements against the channel to the media.

In India, defamation can both be a civil wrong and a criminal offence.

The difference between the two lies in the objects they seek to achieve.

Civil defamation is based on tort law (an area of law which does not rely on statutes to define wrongs but takes from ever-increasing body of case laws to define what would constitute a wrong).

Section 499 states defamation could be through words, spoken or intended to be read, through signs, and also through visible representations.

Three organisations representing the Bru community displaced from Mizoram have rejected the sites proposed by the Joint Movement Committee (JMC), an umbrella group of non-Brus in Tripura, for their resettlement.

The JMC had on July 21 submitted a memorandum to the Tripura government specifying six places in Kanchanpur and Panisagar subdivisions of North Tripura district for the resettlement of the Brus who fled ethnic violence in Mizoram since 1997. The JMC also proposed settling 500 families at most in these places.

However, the organisations representing the Bru Community have opposed the involvement of non-Brus in JMC.

Resettle some 6,500 families in clusters of at least 500 families at each of the sites of their choice —seven in North Tripura district and five in the adjoining Dhalai district. The sites proposed by the JMC, they said, are unconnected by road and electricity and too far from hospitals, schools and other facilities.

In Tripura, they are recognised as a Particularly Vulnerable Tribal Group. In Mizoram, they have been targeted by groups that do not consider them indigenous to the state.

Permanent solution to the crisis:

The centre, in January 2020, signed a historic pact for permanent solution of Bru refugees’ issue.

The agreement was between Union Government, Governments of Tripura and Mizoram and Bru-Reang representatives to end the 23-year old Bru-Reang refugee crisis. Reconciliation between the Mizo and the Bru communities is necessary for successful repatriation and for a long-term solution. Discuss.

Scientists from the Institute of Nano Science and Technology (INST) have developed an equipment-free fluoride ion detection and quantification in drinking water with the naked-eye. It can be operated by non-experts for household use to evade Fluorosis-based disorders.

The technology involves a push-pull chromophore based on 2,3-disubstituted 1,1,4,4-tetracyano-1,3-butadienes (TCBDs) that changes color upon exposure to fluoride ion. Fluorosis is a crippling disease resulting from deposition of fluorides in the hard and soft tissues of body due to excess intake of fluoride through drinking water/food products/industrial pollutants over a long period.

According to WHO, the fluoride concentration in drinking water should not exceed 1.5mg/l. NGT brings strict conditions for commercial use of ground water:

The National Green Tribunal (NGT) has set stringent conditions for commercial groundwater use.

NGT has also struck down the Central Ground Water Authority’s (CGWA) 2020 guidelines, saying they were against the law. The 2018 version of the guidelines had been struck down by the NGT last year.

Concerns associated with these conditions:

Why NGT felt these conditions were necessary?

No improvements: There was no claim over groundwater levels improving, nor was there a projection for future improvement in the past 23 years of regulation by the CGWB.

India was at the bottom of the water quality index, at 120 among 122 countries.

Fifty-four per cent of India’s groundwater wells have decreased in levels, with 21 major cities across the country expected to run out of groundwater by 2020.

India extracted the most groundwater. India accounted for 25 per cent of the total annual global water extracted, with the extraction level steadily increasing.

According to ‘Water and Related Statistics 2019’, a report published by the Central Water Commission (CWC), the annual replenishable groundwater resources in India (2017) are 432 BCM, out of which 393 BCM is the annual “extractable” groundwater availability.

India’s overexploitation of groundwater is leading to the worst water crisis in its history. Examine and suggest measures for improvement. What is ammonium nitrate, which caused the massive explosion in Beirut?

The catastrophic explosion at Beirut port on August 4 was caused by over 2,700 tonnes of ammonium nitrate kept in storage for over six years.

In its pure form, ammonium nitrate (NH4NO3) is a white, crystalline chemical which is soluble in water.

Where all is it used?

When it can cause a fire hazard?

Pure ammonium nitrate is not an explosive on its own. It is classified as an oxidiser (Grade 5.1) under the United Nations classification of dangerous goods.

The explosion of large storage can happen primarily in two ways:

It can irritate the respiratory system. Elevated levels of these pollutants are particularly concerning for people with respiratory conditions.

Discuss how ammonium nitrate is regulated in India and why are these regulations necessary. The pokkali variety of rice is known for its saltwater resistance and flourishes in the rice paddies of coastal Kerala districts.

Observing that adequate steps against dumping of unregulated solid waste on the banks of river Yamuna were not being taken by authorities, the National Green Tribunal (NGT) has warned of imposing environmental compensation on the Uttar Pradesh government.

A detailed article has already been published on Yamuna River pollution. Please go through this:

Madhya Pradesh should not get GI tag for basmati rice’, Punjab CM writes to Prime Minister:

Amid Madhya Pradesh government’s push for the Geographical Indication (GI) tag for basmati rice, Punjab Chief Minister Amarinder Singh has written to Prime Minister Narendra Modi seeking his personal intervention against allowing this in the larger interest of Punjab and other States which are already basmati GI tagged.

The Chief Minister said India exported basmati to the tune of ₹33,000 crore every year. Any dilution in registration may give advantage to Pakistan (which also produces basmati as per GI tagging) in the international market in terms of basmati characteristics, quality parameters.

A detailed article on the issue has already been published. There are no significant developments on the issue. Hence, we request you to revise;

India’s move on Article 370 is ‘illegal and invalid’, says China:

India has told China “not to comment on the internal affairs” of other countries, in response to Beijing describing the dilution of Article 370, on the one-year anniversary of the move, as being “illegal and invalid”.

In response to a question from the Pakistani media, the Chinese Foreign Ministry has repeated its opposition to “any unilateral change to the status quo” in Jammu and Kashmir, echoing its statements on the issue last year.

PM Narendra Modi has laid the foundation stone for a Hindu temple in the northern city of Ayodhya.

About Ayodhya Verdict and the dispute: