3. Production of lithium in stars.

The government has said that it is not considering extending the deadline for payment of Equalisation Levy by non-resident e-commerce players.

Equalisation levy at 6% has been in force since 2016 on payment exceeding Rs 1 lakh a year to a non-resident service provider for online advertisements.

What was the need for equalisation levy?

The levy is seen aimed at taxing foreign companies which have a significant local client base in India but were billing them through their offshore units, effectively escaping the country’s tax system.

What are the issues now?

Tax experts point out that there are practical difficulties in getting PAN and many companies are not paying the equalisation levy as there is still considerable confusion and lack of clarity on the applicability of the same.

The levy has several issues that primarily include wide coverage (even non-e-commerce companies could be covered), lack of clarity on how consideration needs to be determined especially in cases where the income is minuscule compared to the transactions facilitated by the non-resident e-commerce operators.

Discuss the need for and significance of equalisation levy.

A group of retired judges, former bureaucrats and others have written to the newly constituted Committee for Reforms in Criminal Laws, questioning the lack of diversity in the committee and asking for more transparency in its functioning.

This committee was first announced by home minister Amit Shah in parliament in December 2019.

The Committee was constituted through a Ministry of Home Affairs notification on May 4, 2020. The chairperson is Ranbir Singh (vice-chancellor, National Law University Delhi).

The line-up of Committee’s members “lacks diversity, both in terms of the social identity of the members, as well as their professional background and experience.”

Unlike previous committees that had been assigned reforms of such magnitude, this one did not even have full-time members.

Include more expertise and diversity. Create sub-committees with outside experts and other consultants with established track records in the field of criminal justice who can redress the lack of diversity and experience in the Committee’s current composition.

The committee should engage with a wide range of stakeholders in the criminal justice system in a meaningful, substantive, and transparent manner.

Criminal Justice System can impose penalties on those who violate the established laws.

Lord Thomas Babington Macaulay is said to be the chief architect of codifications of criminal laws in India.

Madhav Menon Committee: It submitted its report in 2007, suggesting various recommendations on reforms in the Criminal Justice System of India (CJSI).

Malimath Committee Report: It submitted its report in 2003 on the Criminal Justice System of India (CJSI). Write a note on criminal justice reforms in India.

Sri Lanka’s Fishermen along the northern coast of Jaffna Peninsula, especially Point Pedro, have complained to northern Fisheries authorities about their nets being found damaged in the sea, after being caught under the large Indian trawlers that were reportedly in Sri Lanka’s territorial waters.

The Indo-Lanka fisheries conflict became a strain on the countries’ bilateral ties, with talks at the highest levels and among fisher leaders on both sides proving futile for years.

How Sri Lankan government is handling the situation?

What is bottom trawling?

Bottom trawling is a destructive fishing practice which affects the marine ecosystem. The practice, which involves trawlers dragging weighted nets along the sea floor, is known to cause great depletion of fishery resources, and curbing it is in the interest of sustainable fishing. 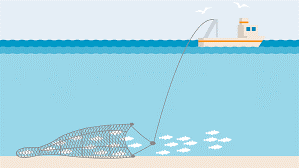 Both countries signed four maritime boundary agreements between 1974 and 1976 to define the international maritime boundary between them. This was done to facilitate law enforcement and resource management in the waters since both countries are located closely in the Indian Ocean, particularly in Palk Strait. What is bottom trawling? How it affects the biodiversity of oceans?

The United Arab Emirates has said that it is keen to have an open-sky agreement with India.

It asked India to look at Open-sky policy separately from fifth and sixth freedoms (of air).

The agreement will not only encourage connectivity and passenger travel between the two countries, but will also result in reduction in airfares on these routes.

International air travel is governed by various freedoms of air.

The degree of “sky openness” depends on the freedoms of the air in the country granted to foreign airlines. There are 9 such freedoms according to the 1944 Convention on International Civil Aviation.

It is a new pan India Central Sector Scheme.

As per the MHA website, both the RGF and the RGCT are registered FCRA associations, a pre-requisite for NGOs and other associations to receive foreign donations. The Indira Gandhi Memorial Trust is not a FCRA registered association.

All these NGOs have been receiving donations.

What to learn from this article?

Political statements are not important. But, it’s important to know the key provisions of FCRA and how NGOs in India are registered, administered and become eligible to receive foreign donations.

Foreign funding of voluntary organizations in India is regulated under FCRA act and is implemented by the Ministry of Home Affairs.

Under the Act, organisations require to register themselves every five years.

As per the amended FCRA rules, all NGOs registered or granted prior permission under FCRA are now required to upload details of foreign contributions received and utilized by them every three months on their website or the FCRA website.

Who can accept Foreign Contribution?

A person having a definite cultural, economic, educational, religious or social programme can accept foreign contribution after getting registration or prior permission from the Central Government.

What is the eligibility criteria for grant of registration?

What is ‘public interest’?

The FCRA regulates the receipt of funding from sources outside of India to NGOs working in India.

It prohibits receipt of foreign contribution “for any activities detrimental to the national interest”.

This condition is manifestly overbroad. There is no clear guidance on what constitutes “public interest”.

In 2019 alone, more than 1,800 NGOs lost their licence to receive foreign funding.

Production of lithium in stars

A forty-year-old puzzle regarding the production of lithium in stars has been solved by Indian researchers.

What was the puzzle all about?

Stars, as per known mechanisms of evolution, actually destroy lithium as they evolve into red giants. Planets were known to have more lithium than their stars — as is the case with the Earth-Sun pair.

However, leading to a contradiction, some stars were found that were lithium-rich.

So far, the planet engulfment theory was quite popular. For example, Earth-like planets may increase the star’s lithium content when they plunge into their star’s atmosphere when the latter become Red Giants.

The study also challenges the present understanding of nucleosynthesis in stars.

It was first produced in the Big Bang, around 13.7 billion years ago when the universe came into being, along with other elements.

While the abundance of other elements grew millions of times, the present abundance of lithium in the universe is only four times the original [Big Bang] value.

It is actually destroyed in the stars.