For Prelims and Mains: Overview of conditions and symptoms mentioned.

Context: Alongside common symptoms, a new study has talked about “unexplained” skin manifestations in Covid-19 patients. Researchers have described five clinical patterns, including the so-called ‘covid toe’, that they observed in 19 per cent of the cases examined. 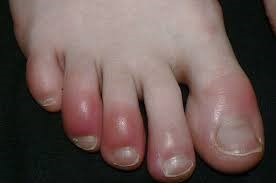 In a new study, researchers were able to describe five major clinical patterns:

What are ‘covid toe’ and chilblains?

It is a kind of rash being reported as a manifestation in some Covid-19 patients’ toes. The researchers have likened it to pseudo-chilblain lesions.

Discuss how COVID 19 affects an individual and what are the symptoms.

For Prelims and Mains: Key features and significance of the platform.

For Prelims: Key processes in BoB region, about BoBBLE.

For Mains: Significance of the experiment and how BoB affects monsoon.

Context: A team from Indian Institute of Science in Bengaluru and UK based University of East Anglia have created a blueprint for accurate prediction of monsoon, tropical cyclones and other weather-related forecast under the Bay of Bengal Boundary Layer Experiment or BoBBLE.

BoBBLE is a joint India-UK project.

It seeks to examine the impact of ocean processes in the Bay of Bengal (BoB) on the monsoon system.

It is is a project funded by Union Ministry of Earth Sciences and the Natural Environment Research Council of UK.

The Bay of Bengal (BoB) plays a fundamental role in controlling the weather systems that make up the South Asian summer monsoon system.

Key processes in the southern BoB:

Monsoons are seasonal winds which reverse their direction with the change of season. The monsoon is a double system of seasonal winds. They flow from sea to land during the summer and from land to sea during winter.

Monsoon is the lifeline of Indian economy as 2/3rd of it depends on farm income and rain is the only source of irrigation for over 40% of the country’s cropped area. Over 70% of India’s annual rainfall occurs in July-September monsoon season. A good monsoon increases crop productivity, raises farm income and drives the economy while, a weak monsoon inflates food prices and harms the economy.

For Prelims: What is NAM, objectives, composition and meets.

For Mains: Is NAM losing it’s relevance today, what’s the way out?

This is the first time PM Modi is taking part in a NAM meeting since taking 2014 when he first became the Prime Minister. The last time any Indian PM participated at Tehran NAM meet was 2012 with the then PM Manmohan Singh was present.

Both in 2016, 2018 summits of NAM, India was represented at Vice President level. The last NAM Summit happened in 2019 in Azerbaijan, before that it was 2016 in Venezuela.

Azerbaijan is the president of the grouping from 2019-2022 and the meet is being organised under the leadership of President of Azerbaijan Ilham Aliyev. The title of the summit is “We stand together against COVID-19”.

What is non- aligned movement?

Non-Aligned Movement is an idea that emerged in 1950. NAM is the second-largest platform globally in terms of country membership after the UN. It currently has more than 120 members.

The evolution of NAM:

During 1950s, the world was emerging out of the long, dark period of colonialism.

Why is it losing relevance today? – Criticisms:

There are now new kinds of alignments, more likely to be defined by economics and geography than by ideology. To be aligned is now a virtue, a sign of good leadership. Countries, especially small ones, can and should aim for multiple alignments of their interests. There is now no country in the world that can claim to be non-aligned.

Discuss the objectives and significance of Non Aligned Movement.

For Prelims and Mains: What is Magnetosphere? How it works and affects earth? Need for study on it?

Context: Scientists at the Indian Institute of Geomagnetism (IIG) have developed a generalized one-dimensional fluid simulation code capable of studying a wide spectrum of coherent electric field structures in near-earth plasma environment or earth’s magnetosphere which can be useful in planning of future space missions.

The study will help to plan the future space missions. The study will also lead to control fusion experiments to fulfill ever-expanding energy demands of humanity.

It is the region around a planet dominated by the planet’s magnetic field.

Other planets in our solar system have magnetospheres, but Earth has the strongest one of all the rocky planets.

Significance: The magnetosphere shields our home planet from solar and cosmic particle radiation, as well as erosion of the atmosphere by the solar wind – the constant flow of charged particles streaming off the sun.

How it is generated?

Earth’s magnetosphere is part of a dynamic, interconnected system that responds to solar, planetary, and interstellar conditions.

It is generated by the convective motion of charged, molten iron, far below the surface in Earth’s outer core. World Press Freedom Day popularly known as World Press Day is one of the calendar events planned, organised and promoted by the United Nations, is observed annually on May 3.

The day is celebrated to raise awareness regarding the importance of freedom of the press. The day is reflection among media professionals about issues of press freedom and professional ethics.

The theme of World Press Freedom Day 2020, “Journalism without Fear or Favour” and the sub-themes for this year are:

The day May 3 also marks the anniversary of Windhoek Declaration. The Declaration is a statement of press freedom principles put together by African newspaper journalists in 1991. It was a landmark document which set the stage for the development of the African media.

Since 1993, the Global Conference is organized annually.