3. Institute for Defence Studies and Analyses.

Topics Covered:Indian culture will cover the salient aspects of Art Forms, Literature and Architecture from ancient to modern times.

For Prelims: Key facts on Kambala.

For Mains: Kambala- For and Against issues.

Context: After Srinivas Gowda created a storm by covering 100 metres in 9.55 seconds recently, another Kambala runner Nishant Shetty has now overtaken the former by completing the same distance in 9.51 seconds. Why it has become controversial?

Over the years, it has however become an organised sport with animal rights activists claiming that the buffaloes run in the race due to fear of being beaten, which the organizers dismiss, saying no violence is involved and that several modifications had been made to ensure that it is an animal friendly event.

Arguments in favour of this sport:

What is it? It is an initiative of Ministry of Drinking Water and Sanitation under Swachh Bharat Mission. Aims to take iconic places and their surroundings to higher standards of Swachhata, so that all visitors benefit and also take away home the message of cleanliness. Implementation of the project: It is a collaborative project with three other central Ministries: Urban Development, Culture, Tourism; all levels in the concerned States and more importantly, Public Sector and Private companies as partners. For Prelims: Features of KMC.

For Mains: Need for, it’s significance and relevance for India.

It is the intervention where babies are placed in skin-to-skin contact with their mothers and exclusively breast fed. It has been recommended worldwide for stable low-birthweight newborns. WHO recommends that it be continued till baby attains a weight of 2.5 kg or till babies wriggle out. Direct suckling by the baby from the breasts is all that is needed for most mothers and babies.  For very premature babies, expressing milk and addition of some essential nutrients may be needed.

Whatever is needed for the medical, emotional, psychological and physical well being of mother and baby is provided to them, without separating them. This might mean adding ultramodern equipment if available, or purely intense psychological support in contexts with no resources. It can even mean going home very early.

About 97% of the world’s low-weight babies are born in developing countries, and India accounts for about 40% of this, implying an urgent need of effective interventions. Therefore, it is imperative that such care is initiated at home in countries such as India. Kangaroo mother care has the potential to prevent thousands of neonatal deaths in our country if 90% coverage can be achieved.

Context: Sanjay Kothari, Secretary to the President of India, will be the next Chief Vigilance Commissioner (CVC).

The post of CVC has been vacant since June 2019.

The Commission was set up on the recommendation of the K.Santhanam Committee on Prevention of Corruption.

Context: Indian Space Research Organisation (ISRO) is preparing to send its first scientific expedition to study the Sun. Named Aditya-L1, the mission, expected to be launched early next year, will observe the Sun from a close distance, and try to obtain information about its atmosphere and magnetic field.

What is it? It is India’s first solar mission. It will be launched using the Polar Satellite Launch Vehicle (PSLV) in XL configuration. The space-based observatory will have seven payloads (instruments) on board to study the Sun’s corona, solar emissions, solar winds and flares, and Coronal Mass Ejections (CMEs), and will carry out round-the-clock imaging of the Sun.

The data from Aditya mission will be immensely helpful in discriminating between different models for the origin of solar storms and also for constraining how the storms evolve and what path they take through the interplanetary space from the Sun to the Earth.

Position of the satellite:

In order to get the best science from the sun, continuous viewing of the sun is preferred without any occultation/ eclipses and hence, Aditya- L1 satellite will be placed in the halo orbit around the Lagrangian point 1 (L1) of the sun-earth system. 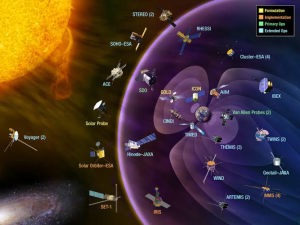 The sun is the only star we can study up close. By studying this star we live with, we learn more about stars throughout the universe. The sun is a source of light and heat for life on Earth. The more we know about it, the more we can understand how life on Earth developed. It is the source of the solar wind; a flow of ionized gases from the sun that streams past Earth at speeds of more than 500 km per second (a million miles per hour). Disturbances in the solar wind shake Earth’s magnetic field and pump energy into the radiation belts, part of a set of changes in near-Earth space known as space weather. Effects On satellites: Space weather can change the orbits of satellites, shorten their lifetimes, or interfere with onboard electronics. The more we learn about what causes space weather – and how to predict it – the more we can protect the satellites we depend on. Safety and preparedness: The solar wind dominates the space environment. As we send spacecraft and astronauts further and further from home, we must understand this space environment just as early seafarers needed to understand the ocean.

For Mains: Need for, significance, challenges involved and issues of feasibility. Context: A mammoth Northern European Enclosure Dam (NEED) has been proposed to protect millions of people and important economic regions of 15 Northern European Countries from rising seas as a result of climate change.

About the proposed dam:

Two dams of a combined length of 637 km will be constructed.

Researchers have estimated the total costs associated with NEED at between €250 billion and €550 billion. If construction is spread over a 20-year period, this will work out to an annual expense of around 0.07%-0.16% of the GDP of the 15 Northern European countries that will be involved.

The construction will “heavily impact” marine and terrestrial ecosystems inside and outside the enclosure, will have social and cultural implications, and affect tourism and fisheries.

Need for such measures:

Such mega-enclosures could potentially be considered in other regions of the world, including the Persian Gulf, the Mediterranean Sea, the Baltic Sea, the Irish Sea, and the Red Sea.

Pakistan’s development of the Ra’ad could be seen as an attempt to match India’s BrahMos cruise missile.

Institute for Defense Studies and Analyses: