Reservation in promotion in public posts not a fundamental right: SC

The proviso is an aid of fostering the real and substantive right to equality to the SCs and STs. It protects the authority of the Union and the States to adopt any of these special measures, to effectuate a realistic (as opposed to a formal) consideration of their claims to appointment in services and posts under the Union and the states. It also emphasises that the need to maintain the efficiency of administration cannot be construed as a fetter on adopting these special measures designed to uplift and protect the welfare of the SCs and STs.

Indra Sawhney vs Union of India and M Nagraj case:

In its landmark 1992 decision in Indra Sawhney vs Union of India, the Supreme Court had held that reservations under Article 16(4) could only be provided at the time of entry into government service but not in matters of promotion.

It added that the principle would operate only prospectively and not affect promotions already made and that reservation already provided in promotions shall continue in operation for a period of five years from the date of the judgment. It also ruled that the creamy layer can be and must be excluded. 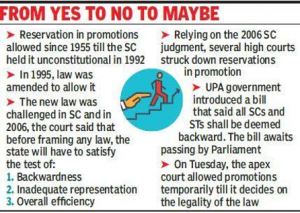