For Mains: Significance of the report.

What is India Skills Report?

It is a joint initiative by PeopleStrong, a Global Talent Assessment Company, in collaboration with Confederation of Indian Industry (CII) along with partners like UNDP, AICTE, and AIU.

The report also consists of an in-depth study of employability amongst the fresh candidates joining the workforce.

States that registered a dip in ranking were West Bengal and Haryana, which could not make it to the top ten list.

Availability of employable talent has improved over the past six years.

Prime Minister Modi’s vision of India becoming a $5 trillion economy requires increasing the per-capita income of Indians which can happen only when people get employment, which consequently demands the skills and useful talent.

To achieve that, along with the universities and colleges in India, various emerging start-ups are already using innovative technologies to facilitate skill up-gradation, job creation, internships and workforce management on their platforms.

It is a Rs.6000 crore World Bank approved Central Sector Scheme of the Ministry of Jal Shakti.

The funding pattern is 50:50 between Government of India and World Bank.

Aims to improve ground water management in priority areas in the country through community participation.

Funds under the scheme will be provided to the states for strengthening the institutions responsible for ground water governance, as well as for encouraging community involvement for improving ground water management to foster behavioural changes that promote conservation and efficient use of water. The scheme will also facilitate convergence of ongoing Government schemes in the states by incentivizing their focussed implementation in identified priority areas.

The implementation of the scheme is expected to have several positive outcomes like better understanding of the ground water regime, focused and integrated community based approach for addressing issues related to ground water depletion, sustainable ground water management through convergence of on-going and new schemes, adoption of efficient water use practices to reduce ground water use for irrigation and augmentation of ground water resources in targeted areas.

Status of groundwater in India:

Central Ground Water Authority (CGWA) is regulating ground water development in States/UTs. As per the assessment of dynamic ground water resources of country carried out jointly by CGWB and State Ground Water Departments, out of the total 6584 numbers of assessment units (Block/ Taluks/ Mandals/ watershed/ Firkka), 1034 units have been categorized as ‘Over-exploited’. This may be due to increase in population, rapid urbanization & industrialization and other related factors.

For Prelims: What are Rare earth elements? Applications?

Context: The US Army plans to fund the construction of a Rare Earths processing facility to secure the domestic supply of minerals that are used to make military weapons and electronics.

This will be the first financial investment by the US military into commercial-scale Rare Earths production since the Manhattan Project to build the first atomic bomb during World War II. For Prelims: About CCPI- features, criteria and performance of various countries.

For Mains: Concerns for India, areas for improvement and the need for government’s active involvement in controlling climate change.

Context: The latest edition of Climate Change Performance Index (CCPI) was recently presented at the climate summit in Madrid.

Designed by the German environmental and development organisation Germanwatch e.V.

The national performances are assessed based on 14 indicators in the following four categories: For Prelims and Mains: Categorization of IUCN red list, features and criteria, recent additions from India to the list.

Context: The International Union for the Conservation of Nature (IUCN) has added about 1,840 new species to its updated “Red List of Threatened Species”. The list now contains over 30,000 species under threat of disappearing.

It is the world’s most comprehensive inventory of the global conservation status of plant and animal species.

How are species categorised? It uses a set of quantitative criteria to evaluate the extinction risk of thousands of species.

Critically Endangered (CR), Endangered (EN) and Vulnerable (VU) species are considered to be threatened with extinction. 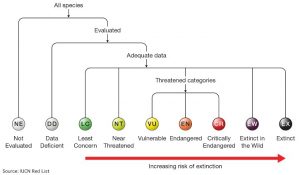 The IUCN system uses a set of five quantitative criteria to assess the extinction risk of a given species. In general, these criteria consider:

It brings into focus the ongoing decline of Earth’s biodiversity and the influence humans have on life on the planet. It provides a globally accepted standard with which to measure the conservation status of species over time.

For Prelims: What are heavy metals?

The exercise was limited to surface water and did not cover groundwater contamination.

The presence of metals in drinking water to some extent is unavoidable and certain metals, in trace amounts, are required for good health. However, when present above safe limits, they are associated with a range of disorders.

What are heavy metals?

A density of more than 5 g/cm3 is sometimes quoted as a commonly used criterion.

It is a joint military exercise between the ground forces of the UAE and the United States. The latest edition is being held in UAE.

What is it? NFRA is a body proposed in Companies Act 2013 for the establishment and enforcement of accounting and auditing standards and oversight of the work of auditors.

Functions: It would be an overarching watchdog for auditing profession and once set up, the current powers of the ICAI to act against erring chartered accountants will be vested with the new regulator. The NFRA will have powers to debar an erring auditor or auditing firm for up to ten years besides slapping heavy penalties.

Jurisdiction: The jurisdiction of the NFRA will extend to all listed companies as well as large unlisted public companies. Besides, the government can refer other entities for investigation by the NFRA where public interest would be involved.

Composition: The regulator will have 15 members, including a chairperson and three full-time members. Besides, there would be a secretary.

Context: International technology company IBM is planning to develop this high-resolution weather forecast model that will also rely on user-generated data to improve the accuracy of forecasts available in India.