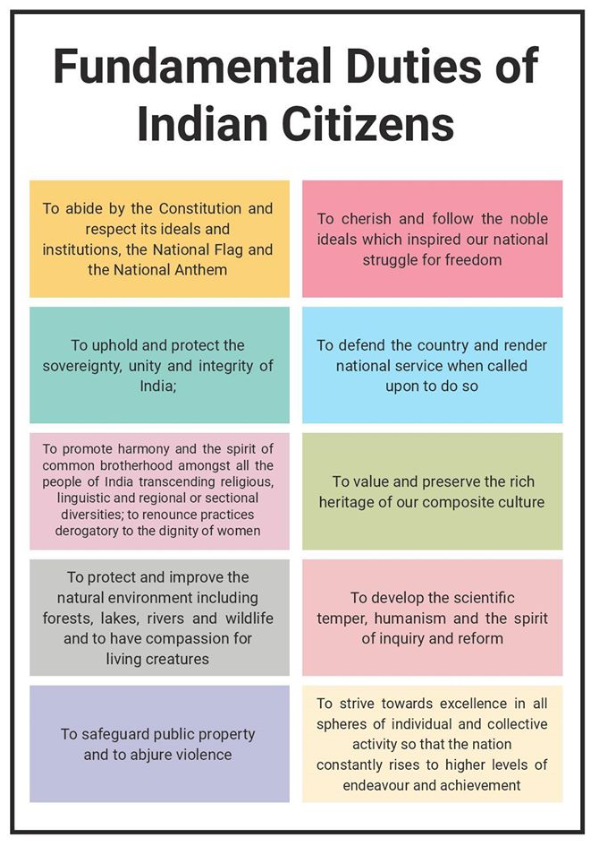 According to Mahatma Gandhi the very performance of a duty secures us our right. Rights cannot be divorced from duties.

Mahatama Gandhi held that “Satyagraha was born, for I was always striving to decide what my duty was.”

Swami Vivekananda observed, “it is the duty of every person to contribute in the development and progress of India”.

The Samvidhan or the Indian Constitution is the supreme law in India and it lays down the framework to uphold the structures, duties, political codes, procedures and powers to be followed by various bodies and institutions in the country.

The Indian Constitution drafted by a Constituent Assembly and not a Parliamentary Assembly is the longest written constitution in the world.

The Chairman of the Constitution drafting committee Dr Babasaheb Ambedkar is also referred to as its chief architect.

26 November has its own importance in the history of independent India because on this day in 1949, the Constitution of India was adopted and it came in to effect on 26 January, 1950.

Therefore, marking the dawn of a new era. To acknowledge the contribution of the framers of the Constitution and to aggravate the people regarding the prominent values, 26 November is celebrated as the ‘Constitution Day’.

Drafting an inclusive Constitution for a diverse India:

The Constitution is not a mere lawyer’s document; it is a vehicle of life and its spirit is always the spirit of age.

A very significant feature of our Constitution is that it balances citizens’ rights and duties. These are social concepts that have grown through time, tradition and usage.

The citizens’ duties as enshrined in the Constitution are essentially a codification of tasks integral to the Indian way of life they focus on tolerance, peace and communal harmony.

A close scrutiny of the clauses of Article 51A of the Constitution, indicate that a number of them refer to values, which have been part of Indian tradition, mythology, religion and practices.

Traditionally, the fundamental impulse to accept responsibilities and perform duties, in every society, has been religious. Performing one’s duties with sincerity, is in fact, a worship mechanism.

As a a line from the Rig Veda notes,”O, citizens of Bharat! As our ancient saints and seers, leaders and preceptors have performed their duties righteously, similarly, you shall not falter to execute your duties”.

Modern civilisations, sadly, do not offer many inducements for the performance of duties they certainly don’t teach people that the real reward for responsible citizenship is the preservation of a free society.

It states that “Everyone has duties to the community in which alone the free and full development of his personality is possible.”

A constitutional expert, BR Ambedkar had studied the constitutions of about 60 countries.

The text prepared by him provided constitutional guarantees and a wide range of civil liberties for citizens including freedom of religion, the abolition of untouchability, and the outlawing of all forms of discrimination.

Recently, Prime Minister of India has rightly said that our children should be taught the Constitution.

Incorporating the essential aspects of fundamental duties in all oaths and pledges.

The Supreme Court has said that since duties are obligatory for citizens, the state should strive to achieve the same goal.

Rights and duties have to exist together. Rights without duties will lead to anarchy.

In this context, the Fundamental Duties serve as a constant reminder of national goals as well as inculcate a profound sense of social responsibility.