Context: Electoral bonds worth ₹232 crore were sold in October, taking the total number of bonds sold from March 2018 till October 2019 to 12,313 and the total value to ₹6,128 crore, according to data shared by the Association for Democratic Reforms (ADR)

What are electoral bonds? Bonds that allow donors to pay political parties using banks as an intermediary.

The electoral bonds are aimed at rooting out the current system of largely anonymous cash donations made to political parties which lead to the generation of black money in the economy.

Why is there a controversy?

For Mains: Concerns, reasons for rise in unemployment, challenges ahead and ways to address them.

Context: The Centre for Monitoring Indian Economy (CMIE) has released a report on Unemployment in India.

Most of the decline in employment has happened due to the fall in the number of workers in agriculture and a sharp fall in the absolute number of female workers- Roughly 37 million workers left agriculture in the last six years. During the same time, 25 million women workers were out of the workforce.

While the trend of workers moving out of agriculture is seen since 2004-05 and is welcome, it also points to the rising vulnerability of farm production.

No doubt, the problem is not new and even earlier governments are to be blamed for the mess that the economy is in. Unfortunately, blaming the data or earlier governments does not make people who are looking for jobs vanish from the country. Stagnant wages and jobless growth are not just indicators of a weakening economy, but also a recipe for political instability and a crisis in the countryside. The least that is expected of the government is an acknowledgement of the extent of the problem and then try to address it.

To sustain the growth of income, improve standard of living, and to reduce poverty, employment opportunities in manufacturing and construction (although a transitory sector) is necessary.

For Mains: Significance and issues associated with the project.

It is a multi-purpose irrigation project. 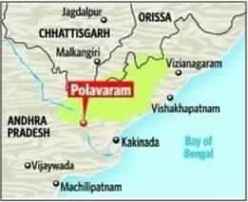 For Prelims: GRAP and key features.

For Mains: Concerns over rising pollution levels, challenges and ways to address them, need for a permanent solution.

AQI entered the “severe plus” or “emergency” category. To address this menace, we need a permanent solution which might include the following:

Context: The Cabinet Secretariat has notified rules reasserting the Union Home Ministry as the authority that would decide on the imposition of the Armed Forces (Special Powers) Act (AFSPA) in the Union Territories of Jammu and Kashmir and Ladakh.

What are the special powers given to army officials?

In this judgement, the Supreme Court arrived at certain conclusions including:

(b) AFSPA does not confer arbitrary powers to declare an area as a ‘disturbed area’;

(d) while exercising the powers conferred upon him by AFSPA, the authorised officer should use minimal force necessary for effective action,

(e) the authorised officer should strictly follow the ‘Dos and Don’ts’ issued by the army.

On November 19, 2004, the Central government appointed committee headed by Justice B P Jeevan Reddy made the following recommendations: (a) AFSPA should be repealed and appropriate provisions should be inserted in the Unlawful Activities (Prevention) Act, 1967; (b) The Unlawful Activities Act should be modified to clearly specify the powers of the armed forces and paramilitary forces and (c) grievance cells should be set up in each district where the armed forces are deployed.

Context: WhatsApp has been used to spy on journalists and human rights activists in India earlier this year. The surveillance was carried out using a spyware tool called Pegasus, which has been developed by an Israeli firm, the NSO Group.

So what exactly is Pegasus? How it works?

To monitor a target, a Pegasus operator must convince a target to click on a specially crafted ‘exploit link’ which allows the operator to penetrate security features on the phone and installs Pegasus without the user’s knowledge or permission. Once the phone is exploited and Pegasus installed, it begins contacting the operator’s command and control servers to receive and execute operator commands, and send back the target’s private data, including passwords, contact lists, calendar events, text messages, and live voice calls from popular mobile messaging apps. The operator can even turn on the phone’s camera and microphone to capture activity in the phone’s vicinity.