Insights into Editorial: Bring all Naga groups on board 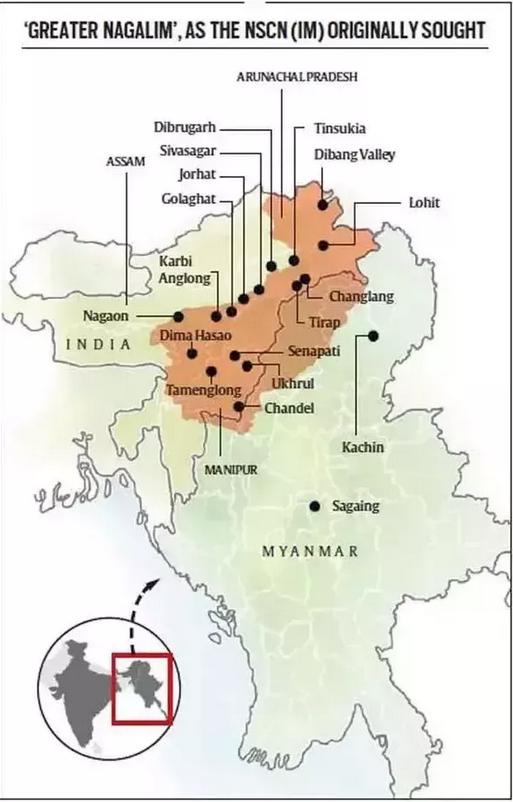 The deadline set by the Centre for wrapping up the Naga peace talks, October 31.

While the Centre’s interlocutor and now Nagaland’s Governor, R N Ravi, has stressed that the government intends to meet the deadline, some key issues remain unresolved with the National Socialist Council of Nagalim (Isak-Muivah), or NSCN(I-M).

Even as the stalemate in Naga talks continues, the Centre is sticking to its October 31 deadline towards finding a solution to the decades old Naga political problem.

The key demand of Naga groups has been a Greater Nagalim (sovereign statehood) i.e redrawing of boundaries to bring all Naga-inhabited areas in the Northeast under one administrative umbrella.

It includes various parts of Arunachal Pradesh, Manipur, Assam and Myanmar as well.

It is a very sensitive issue, and the ball now is in the court of Government of India.

Now, there is a need of wanting a best solution at the earliest, but if the government wants the best for Nagas, they should give more time – not to create confusion or complications — but only if there are signs of a positive outcome.

Where does the territorial demand currently stand?

Way Forward to resolve the issue:

The history of Indo-Naga conflict shows that various past agreements have broken down due to different interpretations of the provisions by the parties at their convenience.

Nagas are culturally heterogeneous groups of different communities/tribes having a different set of problems from mainstream population.

In order to achieve the long-lasting solution, their cultural, historical and territorial extent must be taken into consideration.

Therefore, various recommendations described below can help to achieve long-lasting peace in the region.

Therefore, any arrangement to be worked out should lead to social and political harmony, economic prosperity and protection of the life and property of all tribes and citizens of the states.