Insights into Editorial: A delayed imperative: On BSNL-MTNL merger 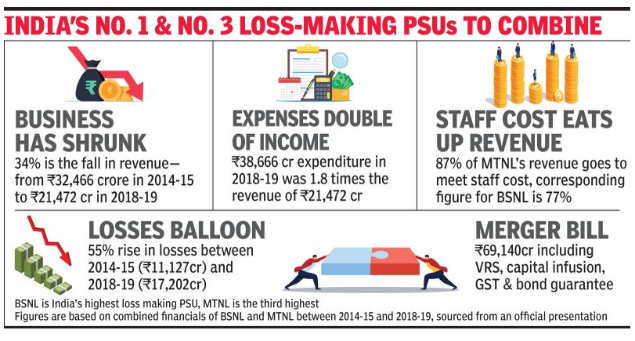 The Rs.56,000 crore merger and revival plan for Bharat Sanchar Nigam Ltd (BSNL) and Mahanagar Telecom Nigam Ltd (MTNL) was approved by the Union cabinet. MTNL operates in Delhi and Mumbai, and BSNL in the rest of India.

India will merge its twin state-run telecom companies in an effort to turn around the money-losing firms, which it considers core assets.

The strategy would also see the government look at ways to exploit the vast land assets of the two companies while paring their manpower by offering incentives to employees to avail an early retirement plan.

About BSNL and MTNL:

BSNL was once a Navratna company. It became sick and saddled with accumulated losses of more than Rs. 90,000 Cr. It has excess workforce with around 1.68 lakh employees. It is simply uncompetitive.

The public sector telecom giant that made telecom services accessible to rural areas by providing affordable mobile connections in commercially non-viable remote areas has been incurring losses for the last several years, prompting the government to consider its sell-off or even complete closure.

MTNL is a state-owned telecommunications service provider in the metro cities of Mumbai and New Delhi in India. It has around 22,000 employees.

The Government says, it wants to make them competitive and bring professionalism.  In the coming 4-years, monetization of BSNL/MTNL assets worth around Rs. 37,500 Cr will be done.

Attractive VRS scheme for the employees. If the employee is 53 ½ years and above age, such an employee will be offered 125% of their salary, gratuity, pension etc., all computed till the age of retirement. BSNL and MTNL put together have around 1.9 lakh employees.

Only a drastic restructuring with effective VRS stands a chance of revival for BSNL and MTNL.

The government’s aim is to leverage the spectrum allotment to make BSNL and MTNL compete more effectively in the domestic telecom market where a brutal tariff war and rising debt from purchases of airwaves at hefty prices in previous auctions have hurt players.

India is planning its first auction of fifth-generation or 5G airwaves this year.

Moreover, the country should have a national public sector telecom operator. It is required for strategic reasons and it is also needed because private players will not cover some regions due to commercial reasons.

Large tower base and contribution in BharatNet project

A successful revival of BSNL will have far-reaching implications for the industry, this at a time when two of the three surviving private players are faced with not only sliding market share but a government bill of about Rs.75,000 crore following the loss of a legal challenge.

The reach of its network, especially in remote parts, makes BSNL a “strategic asset” that has national security implications given its role in serving the armed forces and responding to natural disasters.

The revival plan, even if years late, is a clear recognition by the government of this indisputable fact.

Justifying the government efforts to revive the two companies, officials said these are strategic assets and have been playing an important role in coping with natural calamities and managing army networks.