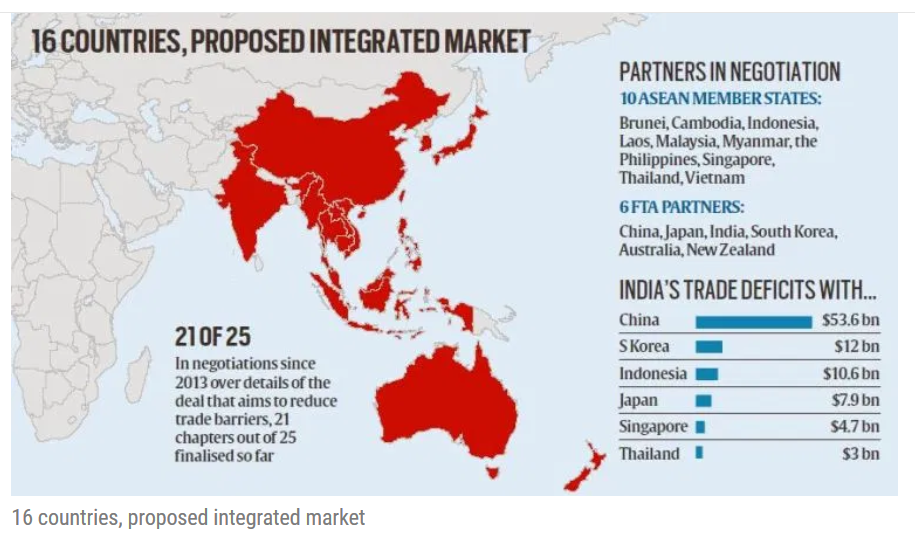 The meeting, which is likely to be the last one at this level, is expected to work out the unresolved issues in the negotiations on the mega trade deal that is to be concluded later this year.

Regional Comprehensive Economic Partnership (RCEP) agreement that India is likely to sign in Bangkok next month.

Of the 25 chapters in the deal, 21 have been finalised. Chapters on investment, e-commerce, rules of origin, and trade remedies are yet to be settled, and ministerial guidance is being sought at the ongoing meeting in Bangkok.

The Regional Comprehensive Economic Partnership (RCEP) is a trade deal that is currently under negotiation among 16 countries — the 10 member countries of the Association of Southeast Asian Nations (ASEAN), and the six countries with which the ASEAN bloc has free trade agreements (FTA).

Negotiations on the details of the RCEP have been on since 2013, and all participating countries aim to finalise and sign the deal by November.

What does the RCEP propose?

The purpose of RCEP is to create an “integrated market” spanning all 16 countries, making it easier for products and services of each of these countries to be available across this region.

ASEAN says the deal will provide “a framework aimed at lowering trade barriers and securing improved market access for goods and services for businesses in the region”.

The negotiations are focussed on areas like trade in goods and services, investment, economic and technical cooperation, intellectual property, competition, dispute settlement, e-commerce, and small and medium enterprises.

Why is the RCEP important?

It is billed as the “largest” regional trading agreement ever these countries account for almost half of the world’s population, contribute over a quarter of world exports, and make up around 30% of global Gross Domestic Product (the value of all goods and services produced in a year).

How does India stand to gain?

Sections of Indian industry feel that being part of RCEP would allow the country to tap into a huge market, if the domestic industry becomes competitive.

Pharmaceuticals and cotton yarn are confident of gains, and the services industry too, may have new opportunities.

However, on the other side, If dairy products are covered under an RCEP deal, India may have to allow members of the bloc greater access to its market, whether through phased duty reductions or more liberal tariff rate quotas (TRQs).

There is an already existing TRQ for milk powder, which enables import of up to 10,000 tonnes per year at 15% customs duty, and quantities beyond that at the regular rate of 60%.

The Indian dairy industry is resisting any enhanced TRQs or other import concessions, even if extended only to RCEP countries, as opposed to the US or European Union.

Critics argue that it affects almost all sectors of the Indian economy — agriculture, employment, industry and trade. Most Indians are finding it difficult to manage their day-to-day life.

Concerns from some Industries:

Sections of Indian industry feel that being part of RCEP would allow the country to tap into a huge market, if the domestic industry becomes competitive.

Pharmaceuticals and cotton yarn are confident of gains, and the services industry too, may have new opportunities.

There are some differences within industries. The bigger players in steel, for example, are apprehensive of the potential impact on their businesses;

However, makers of finished goods have argued that limiting steel supply to domestic producers through higher import duties will put them at a disadvantage.

At a time of global uncertainties and challenges to multilateralism and the international economic order, a negative message on RCEP would undermine India’s plans for economic growth.