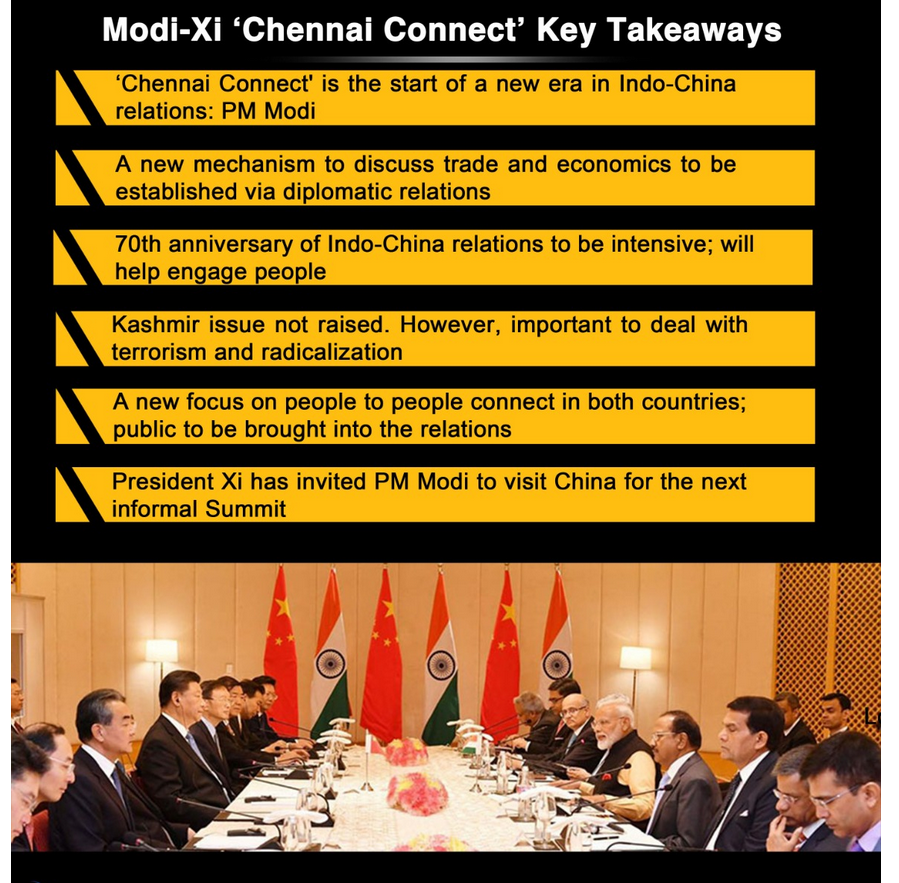 Talks between Modi and Xi were aimed at building on the relationship reset that began in Wuhan in April last year.

The Wuhan spirit had given a new momentum and trust to our ties. In the summit, Modi and Xi decided to issue “strategic guidance” to their militaries to strengthen communication and build trust and understanding.

What will be the agenda in Mamallapuram:

PM Narendra Modi will hold one-to-one and delegation-level talks with the Chinese President.

In the Mamallapuram summit, the focus of the talks is likely to be on steps to ensure mutual development and expanding overall ties.

The focus of the meeting is on improving people to people contact and on how to maintain peace and tranquillity on the India-China border.

The meeting between them has no specific agenda but issues like terrorism, terror funding, support and sourcing are likely to come up during Chinese President Xi Jinping and PM Narendra Modi’s talks.

The two leaders are likely to decide dates for the next Special Representatives talks.

New mechanism to be set up to discuss trade and investment:

India and China plan to set up a new mechanism to discuss ways and means to reduce trade deficit ($53 billion), enhance mutual trade, investment and services.

This was one of the important understandings reached out by Indian Prime Minister Narendra Modi and Chinese President Xi Jinping at the end of the two-day informal summit between the two leaders.

The new mechanism will be at an elevated level.

The decision on when and how this mechanism will be activated will be done now through diplomatic channels.

Areas of Defence and security:

India and China were global economic powers during most of the last 2000 years and were returning to stage gradually.

The two countries should go beyond the model of differences management, actively shape bilateral relations and accumulate positive energy.

We should enhance exchanges and cooperation, promote convergence of interests and achieve common development.

Both agreed that it is important to support and strengthen the rules-based multilateral trading system at a time when globally agreed trade practices and norms are being selectively questioned.

India and China will continue to work together for open and inclusive trade arrangements that will benefit all countries.