For Mains: Need for and significance of iodised salt, variations across states and what needs to be done?

Need for and significance of Iodised Salt:

For Prelims and Mains: About UN Peacekeeping- need, significance, challenges and operations in place.

Context: India calls for reforms in peacekeeping at UNSC debate.

Peacekeeping currently is in a “no-man’s land” between trying to keep the peace in fragile environments and trying to enforce the maintenance of peace, where there is none to keep.

There is not effective improvement of the cooperation between Troop Contributing Countries (TCCs), the Security Council and the Secretariat.

UN peacekeeping is a unique global partnership. It brings together the General Assembly, the Security Council, the Secretariat, troop and police contributors and the host governments in a combined effort to maintain international peace and security. Its strength lies in the legitimacy of the UN Charter and in the wide range of contributing countries that participate and provide precious resources.

For Prelims and Mains: The scheme- features, significance, need and potential?

Aim: To improve the life of small and marginal farmers of the country.

Salient features of the scheme:

Need for and Significance of the scheme:

It is expected that at least 10 crore labourers and workers in the unorganised sector will avail the benefit of the scheme within next five years making it one of the largest pension schemes of the world.

For Prelims: Key features of NADCP, About FMD and Brucellosis.

For Mains: Need for interventions, concerns associated and significance of such programmes.

Context: The government is all set to launch the National Animal Disease Control Programme (NADCP).

Aim: To eradicate Foot and Mouth Disease (FMD) and Brucellosis in the livestock. Objectives of the programme:

The disease of FMD and brucellosis are common among livestock such as- cow, buffaloes, bulls, pigs, sheep and goats. Both the diseases have a direct negative impact on trade of milk and other livestock products.

Context: ASF outbreak has been sweeping through swine populations in China, leading to massive mass cullings and a subsequent increase in the price of the country’s favourite protein. 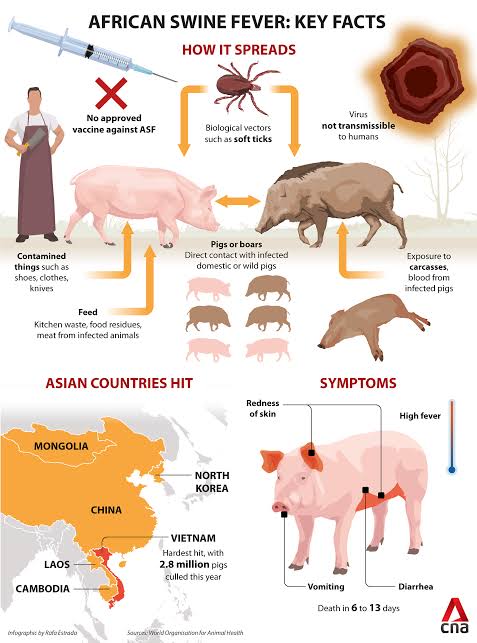 For Prelims and Mains: Ban on single- use plastics- significance.

Context: Single-use plastic items will be banned in India from October 2, 2019.

A form of plastic that is disposable, which is only used once and then has to be thrown away or recycled.

Why is it being banned?

With climate and environment becoming a rising global concern, plastic pollution and plastic waste management have become the focal point of worry.

Millions of tons of plastic is being produced every year, which is not biodegradable. Hence, the countries across the globe are adopting and implementing strategies aimed at eliminating the use of single-use plastic.

India has won global acclaim for its “Beat Plastic Pollution” resolve declared on World Environment Day last year, under which it pledged to eliminate single-use plastic by 2022.

The ubiquitous plastic has made humans so dependent that it is virtually impossible to live without it.

The PWM Rules Amendment, 2018, omitted explicit pricing of plastic bags that had been a feature of the 2016 Rules.

Waste plastic from packaging of everything from food, cosmetics and groceries to goods delivered by online platforms remains unaddressed.

Lack of adequate infrastructure for segregation and collection is the key reason for inefficient plastic waste disposal.

Small producers of plastics are facing the ban, while more organised entities covered by the Extended Producer Responsibility clause continue with business as usual. Context: India has announced an immediate humanitarian assistance of $1 million to help people in The Bahamas affected by Hurricane Dorian. Motihari-Amalekhgunj petroleum pipeline will transport fuel from Barauni refinery in Bihar’s Begusarai district to Amalekhgunj in southeastern Nepal, situated across the border from Raxaul in East Champaran district.

The 69-km pipeline will drastically reduce the cost of transporting fuel to landlocked Nepal from India.