Insights into Editorial: Having the last word on ‘population control’ 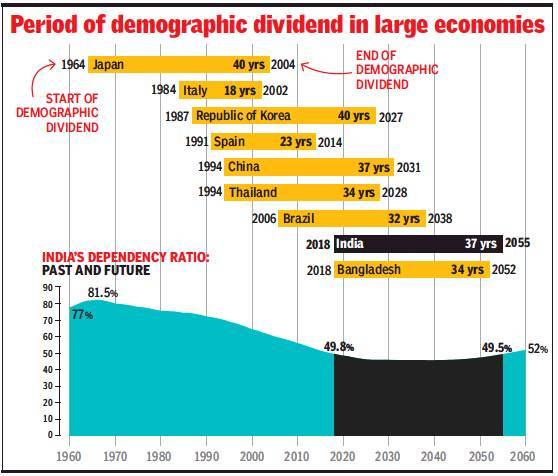 Recently, a Union Minister expressed alarm, in a Tweet, over what he called the “population explosion” in the country, wanting all political parties to enact population control laws and annulling the voting rights of those having more than two children.

In recent past also, a prominent businessman-yoga guru wanted the government to enact a law where “the third child should not be allowed to vote and enjoy facilities provided by the government”. This, according to him, would ensure that people would not give birth to more children.

But Economic Survey given contrasted Reality:

However, both these demands are wayward and represent a warped thinking which has been rebutted rather well in the Economic Survey 2018-19.

The Survey notes that India is set to witness a “sharp slowdown in population growth in the next two decades”.

The fact is that by the 2030s, some States will start transitioning to an ageing society as part of a well-studied process of “demographic transition” which sees nations slowly move toward a stable population as fertility rates fall with an improvement in social and economic development indices over time.

Which means in another two years, India will overtake China. There is no denying that urgent and aggressive steps such as strict control policies and linking their observance with incentives are urgently needed to control the population.

An Expert Group headed by M.S. Swaminathan was appointed to prepare the draft of a national population policy. The National Population Policy (NPP) finally came into force in 2000.

This shows that India has looked at population so that it truly becomes a thriving resource of Indian Economy.

Currently, as many as 23 States and Union Territories, including all the States in the south region, already have fertility below the replacement level of 2.1 children per woman showing support rather than control works.

In 2017, government mentioned that Family Planning Programme in India is target free and voluntary in nature and it is the prerogative of the clients to choose a family planning method best suited to them as per their reproductive right.

India have to see Population as a Resource rather than Burden:

As per Economic Survey 2018-19, India is set to witness a sharp slowdown in population growth in the next two decades.

Moreover, in 2018, the government proposed ‘lifecycle framework’ to protect the health and nutrition needs of mother and child, till the adolescent stage of child.

Population is the life blood of a growing economy. Today, as many as 23 States and Union Territories, including all the States in the south region, already have fertility below the replacement level of 2.1 children per woman. So, support rather than control works.

To integrate Indian Systems of Medicine (ISM) in the provision of repro­ductive and child health services, and in reaching out to households is best way forward.

If the number of working population increases, given that they are provided with suitable jobs, the production of any economy will increase.

Once the economic output increases, taxes will also increase which empower the government to spend more on public services, goods and investments.

The present government supports the idea of voluntary and target free family panning in India.

The damage done when mishandling issues of population growth is long lasting. Let us not forget that the scars of the Emergency are still with us.

Men used to be part of the family planning initiatives then but after the excesses of forced sterilisations, they continue to remain completely out of family planning programmes even today.

The government now mostly works with woman and child health programmes. Mistakes of the Emergency-kind are not what a new government with a robust electoral mandate might like to repeat.

This shows that government is focusing on benefits of demographic dividend to support growth by providing range of services to mother and child rather than denying services.