Insights into Editorial: Why South Asia must cooperate 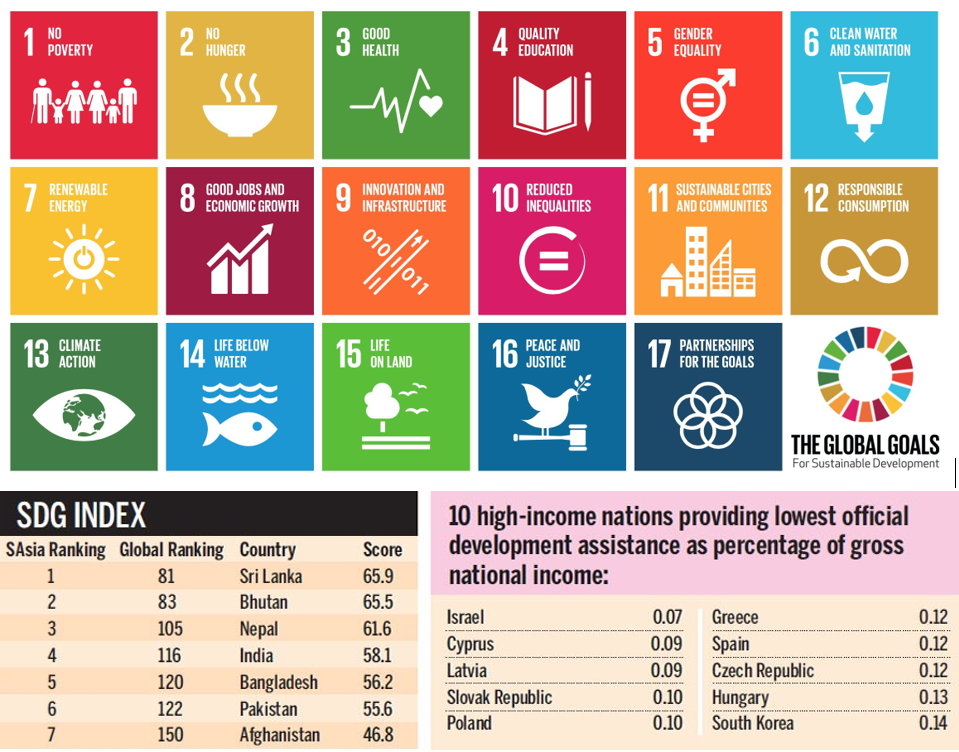 South Asia covers only about 3.5% of the world’s land surface area but hosts a fourth (25%) of its population, making it a region of significant importance for international development.

In spite of the geographic proximity countries in this region enjoy and their common socio-cultural bonds, this is one of the world’s least integrated regions.

South Asia’s average GDP per capita is only about 9.64% of the global average. Accounting for more than 30% of the world’s poor, the region faces myriad economic and environmental challenges.

SDGs-a follow-up on Millennium Development Goals (MDGs), which expired at the end of 2015-are a set of 17 goals and 169 targets covering a broad range of sustainable development issues. These goals have to be achieved by all UN member states by 2030.

One of the primary objectives of SDGs is to end poverty and hunger from the world.

SDGs also aim to promote well-being of all the people, sustainable industrialisation, inclusive and sustainable economic growth, and employment and decent work for all.

Both performance and progress towards these goals appears to have little to do with levels of per capita income or degree of development.

For Instance, in India, which is not only the largest and most diversified economy in the region but also prides itself on rapid income growth rates and hopes to emerge as a potential leader of the world economy, performs very poorly even in relation to other South Asian countries.

Why is South Asia performing so badly on the SDGs?

The bigger concern is that there is no other goal that South Asian countries are even on track to meet (other than Sri Lanka for Goals 6 and 8).

Even for the goals for which the current performance is moderate and shows some improvement, the current rate of progress would be inadequate to meet the goal.

And most countries show very high incidence of stagnant or no progress for many goals, and absolute deterioration which implies moving away from the target for others.

Even with these somewhat optimistic assessments for some indicators, for the region as a whole, 14 of the 17 SDGs will be missed at the current rate of progress, around three-quarters of the targets will not be met, and for at least 12 of the targets, the current direction of change is negative.

Reducing Inequalities is key to achieve all other SDG’s:

What explains this overall poor performance, as well as the slightly better performance of some countries within this aggregate picture of South Asia?

For instance, India has formulated some pragmatic plans and initiatives to improve food and nutrition security from which many of the neighbouring countries can benefit.

On financing the SDGs in South Asia, countries can work towards increasing the flow of intra-regional FDI. The private sector too can play a vital role in resource mobilisation.

If the countries of South Asia, the fastest growing region of the world, can come to a common understanding on regional integration and cooperation in achieving the SDGs, it can unleash a powerful synergistic force that can finally make South Asia converge.

A stable and effective balance of power has to be achieved across our eastern shores in South and South-East Asia to meet challenges posed by all types of social, economic and political issues.

A convergence towards achieving a common socio-economic agenda gives hope that no one in South Asia will be left behind in the journey towards eradicating poverty and enduring dignity to all.