UPSC Civil Services (Preliminary) exam is not so predictable and uncertain elements keep popping up year after year, we all realize this, but note that it is not the wild-wild west as many believe it to be! A halo of uncertainty has been fashioned around this exam, and it has become almost a fad to curse the examiner coming out of the examination hall.

To an experienced mind, such an exercise might seem as conventional myth-making. The exam does seem bizarre at first but it starts to make sense and feel more familiar as you look to the past. Why are we saying this? Understand that a teacher or an examiner, say here at Insights, looks at a paper quite differently from the way you do. Wider knowledge and experience allow them to draw observations that often do not occur to aspirants.

It is this experience that allows us to contextualize the UPSC Civil Services (Preliminary), 2019 question paper within a familiar pattern based on the past year papers of UPSC. Please note that this article is not a mere comment or an analysis of this year’s paper, which might seem redundant at this point given that so many of its like would have been published till date. The article rather gives you a way ahead to prepare for next year Prelims examination so that you can avoid the mistakes you have committed earlier. You may be stumped by what you find ahead, if you had not discovered it earlier. The article is rich in information and quite dense. The central motivation behind writing this article is to help you push your marks up in next year Prelims. Please read the article carefully and patiently, and take note of important pointers as they appear.

This article picks up some of the tastes and habits of the UPSC examiners that could be observed from the past year papers. These habits and tastes may or may not change next year, and if they don’t (and they haven’t despite the seemingly erratic papers of UPSC), you will be at an advantage noting and exploiting them. Moreover, the examiners at UPSC operate under certain guidelines and limitations, and it is important to understand these limitations since they prevent this exam from becoming a game of the wild west!

To those who feel that UPSC plots against the material devised by institutions like us, we would like to comment that, for now, it remains as a fiction, and had it been the case, not even a single question would have appeared from our test series or website in the last 3-4 years, including this year. Truth is clearly to the contrary.

We have often mentioned in our articles that“the weightage of static portion will go down considerably as UPSC exhausts its traditional base of questions and moves to more dynamic sources” (See here in the article on ideal UPSC paper). What is important to note that even as this conventional base has been exhausted, there remains a core hidden syllabus which has not changed much over the years, perhaps because it was never revealed and remained un-assumed for an average aspirant. We are not including either the traditional static questions (polity/economy/geography/history) or the questions on national parks, tribes, endangered/endemic species etc. in this core hidden syllabus which are well known areas. If you remember, UPSC had revealed a detailed 5 page syllabus for Mains examination in 2013; a syllabus that fitted within a single page previously. They revealed a lot of topics that kept appearing in Mains examination, but were never revealed by UPSC until 2013. Analogy is similar here, UPSC has not revealed the entire Prelims syllabus, but there are a set of guidelines with the examiners which perhaps include this hidden syllabus. Hopefully, they may be made more explicit in the coming years.

If you note, right from 2011, questions from some areas have been constants in this exam, i.e. they keep coming year after year or every alternate year. Some of these include:-

These are some of the hot favorite topics of UPSC and in a given year you may expect more than 15-20 questions from these topics alone like in 2019 Prelims. Therefore, they form a crucial part of your prelims preparation and due care should be taken that you read at least all the major news articles associated with these topics that have appeared in the last 1-2 years.

For instance, go to the “news” section of Google search and type emerging technologies. The search will lead you to major websites like Nature, Science Daily, MIT and NASA where you will find updated articles on the same. Make sure you review such articles quickly and makes notes. Regular reading of newspapers, like the Hindu and Indian Express, is also extremely helpful. Given the dynamic nature of these topics, many aspirants often skip preparing them and end up leaving these questions in the examination.

Below, these topics and all the questions appearing from them between 2014-19 have been categorized. This is an exhaustive account of the appearance of these topics in Prelims. As you would note UPSC keeps repeating topics (for e.g. gene silencing in 2014 and RNAi, which employs gene silencing, in 2019). So, the list below is EXTREMELY important. You should save this list, do some research on each of these topics and make notes for there is a high chance of repetition. Moreover, it is important to study these areas independently; some of the sources will be mentioned below in the article. 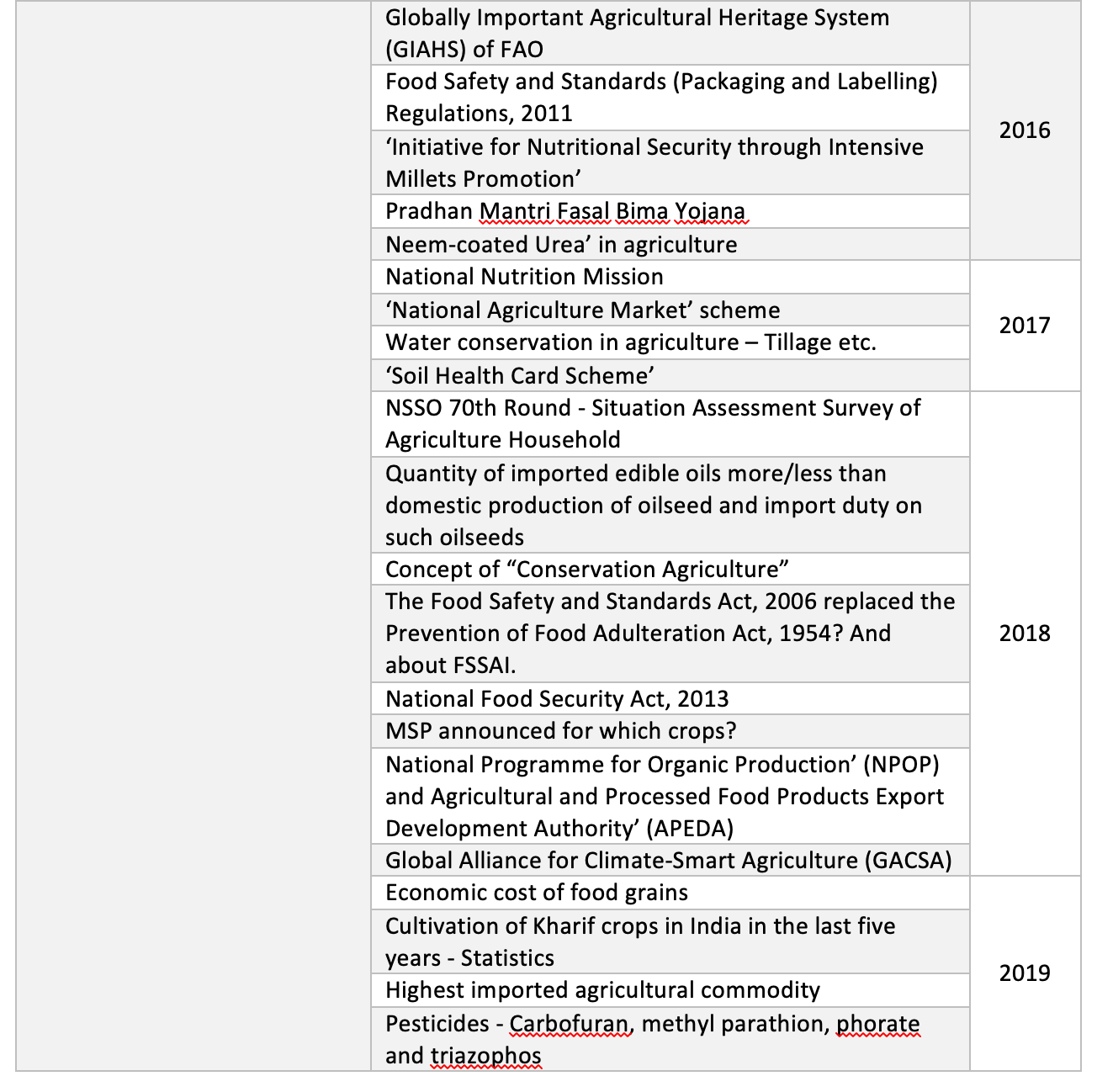 Please note that we are not including general questions on environment and sciences for the document would become too voluminous. Questions on national parks, conventions, species should also be prepared thoroughly alongside this hidden syllabus.

There is another emerging part of the syllabus – regulatory bodies, e.g. PGNRB, commissions or committees that assist in regulatory functions – in 2019 Prelims. Other regulatory bodies like TRAI, CCI etc. should also be prepared.

OBSERVATIONS from the above table and SOURCES to prepare

These are some of safe harbors to stick to even in the most unorderly situations and these areas of coverage are important because they are emerging as important threats and opportunities to governance. The hidden or implicit syllabus may nor may not be made explicit by the UPSC (like it did in Mains 2013), but you should be prepared nonetheless.

No administrator can afford to ignore developments in important fields such as bio-technology and space sciences and it is perhaps this that the UPSC has been wanting to remind aspirants, time and again, who are comfortable sticking to a bunch of old NCERT books and newspapers. The pattern may have changed, but the habits of a lot of aspirants remain unchanged, and they keep referring to the same old sources.

It may be crucial to read and revise the same few sources multiple times from the point of view of Mains examination, but Prelims is a different ball game altogether. You need not limit your sources for Prelims preparation and the wider you read (within the syllabus), the better are your chances of being selected.

NCERT books have not become irrelevant but the way you should use them has changed. A mere reading of these books will not suffice, for the examiner now picks up keywords from these books, goes to the internet, designs a well-researched question and puzzles you in the exam hall. This tells you that you should start to use internet research more frequently than before.

Basic strategies remain the same, and are unlikely to change. The more well-read you are, the luckier you will find yourself in the examination hall. If this year was tough for you, you should not feel disappointed and brace yourself for a more calibrated effort for next year. Put all the hard work you can. All the best!