For Mains: Cooperative federalism- meaning, significance and efforts by the government.

Aim: to achieve Sustainable Development Goals and to enhance cooperative federalism by fostering the involvement of State Governments of India in the economic policy-making process using a bottom-up approach.

The institution has to provide governments at the central and state levels with relevant strategic and technical advice across the spectrum of key elements of policy. This includes matters of national and international import on the economic front, dissemination of best practices from within the country as well as from other nations, the infusion of new policy ideas and specific issue-based support. The institution has to be able to respond to the changing and more integrated world that India is part of.

Chairperson: Prime Minister of India as the Chairperson.

Governing Council comprising the Chief Ministers of all the States and Lt. Governors of Union Territories.

Regional Councils will be formed to address specific issues and contingencies impacting more than one state or a region. These will be formed for a specified tenure.

The Regional Councils will be convened by the Prime Minister and will comprise of the Chief Ministers of States and Lt. Governors of Union Territories in the region.  These will be chaired by the Chairperson of the NITI Aayog or his nominee.

Experts, specialists and practitioners with relevant domain knowledge as special invitees nominated by the Prime Minister.

The full-time organizational framework will comprise of, in addition to the Prime Minister as the Chairperson:

Vice-Chairperson: To be appointed by the Prime Minister.

Part-time members: Maximum of 2 from leading universities research organizations and other relevant institutions in an ex-officio capacity. Part time members will be on a rotational basis.

Ex Officio members: Maximum of 4 members of the Union Council of Ministers to be nominated by the Prime Minister.

Chief Executive Officer : To be appointed by the Prime Minister for a fixed tenure, in the rank of Secretary to the Government of India. 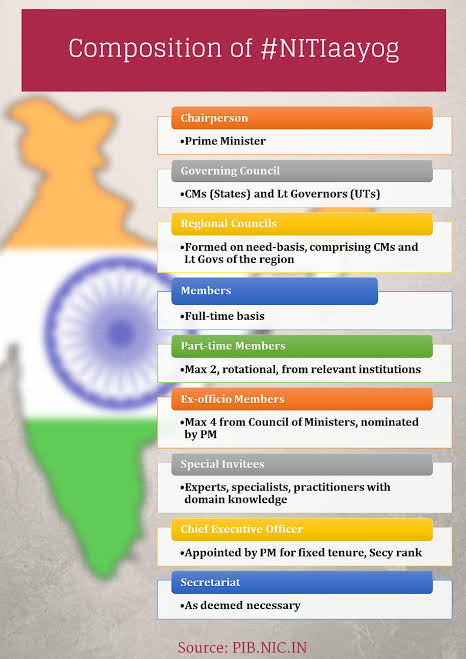