For Prelims and Mains: Western Disturbances- causes, effects and significance.

Why in News? The western disturbance has brought heavy rainfall across various parts of the country.

What is Western Disturbance?

It is an extratropical storm originating in the Mediterranean region that brings sudden winter rain to the north-western parts of the Indian sub-continent. It is a non-monsoonal precipitation pattern driven by the westerlies. 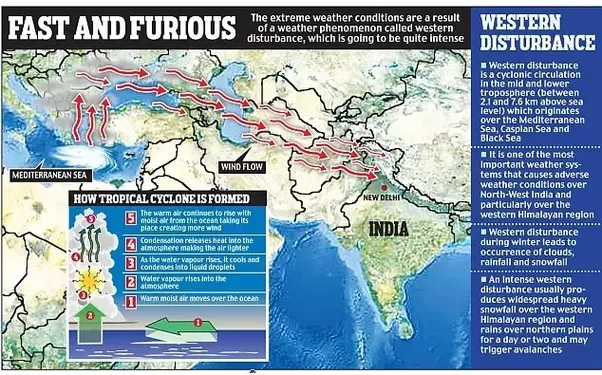 Western Disturbance originates in the Mediterranean Sea as extra-tropical cyclones. A high-pressure area over Ukraine and neighbourhood consolidates, causing the intrusion of cold air from Polar Regions towards an area of relatively warmer air with high moisture. This generates favourable conditions for cyclogenesis in the upper atmosphere, which promotes the formation of an eastward-moving extratropical depression. They gradually travel across the middle-east from Iran, Afghanistan and Pakistan to enter the Indian sub-continent.