For Prelims and Mains: NSM- objectives, significance and challenges ahead.

Context: IIT Kharagpur has signed an MoU with Centre for Development of Advanced Computing (C-DAC) to set up a 1.3 Petaflop high-performance computing facility and data centre funded under the National Supercomputing Mission.

Over the years, supercomputers have benefitted mankind in several ways. Weather prediction has reached accuracy of forecast as well as real time tracking of natural phenomenon. Timely warning of cyclones in the recent past have saved many lives and property. The Mission aims to further such capabilities beyond current levels. What is a domestic systemically important bank and why is it important?

D-SIB means that the bank is too big to fail. According to the RBI, some banks become systemically important due to their size, cross-jurisdictional activities, complexity and lack of substitute and interconnection. Banks whose assets exceed 2% of GDP are considered part of this group.

Mains Question: What prompted RBI to classify some banks in India such as SBI and ICICI as systemically important? Also examine implications of this move.

Modern Indian history from about the middle of the eighteenth century until the present- significant events, personalities, issues.

Who are the Gurkhas of the British Army?

For Prelims and Mains: Gurkha regiment in British army, historical background and significance.

Context: The British Army announced this week that it would create a new Specialised Infantry Battalion by recruiting more than 800 Nepalese Gurkha servicepersons this year.

Who are they? Brief background:

Currently, the Gurkhas comprise up to 3% of the British Army, and in 2015 completed 200 years of service there.

Impressed by their discipline and ferocity in Anglo-Nepalese War of 1814-16, the British decided to recruit Gurkha soldiers starting in 1815. Since then, the Gurkhas have fought on the side of the British Empire in almost every war, including both World Wars.

The Gurkhas are recruited every year at the British Gurkha camp at Pokhara in Nepal. The camp enlists fresh recruits not only for the British Army, but also for the counter-terror arm of the Singapore Police Force. British Army scouts roam the Nepalese countryside to identify potential recruits, who then undergo a rigorous training process before joining.

Context: Global climatic disruptions due to the strong and extended positive phase of the ENSO conditions, or simply El Nino in 2015-16 increased the outbreak of diseases in the regions of its influence, according to a study published in the journal Nature.

The scientists analysed certain disease outbreaks in the 2015-16 period and tried to correlate them with higher temperatures and erratic rainfall patterns characteristic of the El Nino. Context: Chhattisgarh has revised the composition of the governing council of District Mineral Foundation Trusts (DMFTs), and placed the minister in-charge of the respective districts at the head of the governing bodies. Earlier, these were headed by the District Collector (DC).

The change has been brought about by introducing amendments to the Chhattisgarh District Mineral Foundation Trust Rules (2015), through a notification.

The move follows the Chhattisgarh government’s observation that DMFTs have not been functioning optimally to benefit mining-affected people and the worst affected areas. The decision has been taken to improve participation of people through the representatives selected by them. This is to ensure that the needs of mining-affected areas are reflected well. The effort is to ensure that DMFs work in an accountable manner.

DMFTs which have been set up in various mining districts, including all districts of Chhattisgarh, have a two-tier administrative structure, a Governing Council (GC) and a Managing Committee (MC) with differential responsibilities. The idea of a two-tier structure was to have appropriate checks and balances in decision-making.

Both the GC and the MC were being headed by the DC. The other members of these bodies predominantly comprise officials and elected representatives. There is practically no representation of mining-affected people in the body to have their voice and representation in decision-making.

In order to have a more balanced structure, the Chhattisgarh government has now removed the DC as chairperson of the GC. Also, all members of legislative assembly (MLA) of the concerned mining district have been made GC members.

DMFs were instituted under the Mines and Minerals (Development and Regulation) (MMDR) Amendment Act 2015 as non-profit trusts to work for the interest and benefit of persons and areas affected by mining-related operations.

The objective of District Mineral Foundation is to work for the interest of the benefit of the persons and areas affected mining related operations in such manner as may be prescribed by the State Government.

For Prelims and Mains: Bomb cyclone- meaning, features, threats and preparedness, why are they on rise in recent times?

Context: A powerful bomb cyclone has impacted several part of the US causing heavy floods.

What is a Bomb cyclone?

The term is used by meteorologists to indicate a mid-latitude cyclone that intensifies rapidly.

A bomb cyclone happens when atmospheric pressure in the middle of the storm drops at least 24 millibars over 24 hours, quickly increasing in intensity. The lower the pressure, the stronger the storm.

Deep drops in barometric pressure occur when a region of warm air meets one of cold air. The air starts to move and the rotation of the earth creates a cyclonic effect. The direction is counterclockwise in the Northern hemisphere leading to winds that come out of the northeast.

What’s the difference between hurricanes, cyclones and typhoons?

For Prelims and Mains: Composition, role, objectives and significance of FSDC. The Council is chaired by the Union Finance Minister and its members are Governor, Reserve Bank of India; Finance Secretary and/or Secretary, Department of Economic Affairs; Secretary, Department of Financial Services; Chief Economic Adviser, Ministry of Finance; Chairman, Securities and Exchange Board of India; Chairman, Insurance Regulatory and Development Authority and Chairman, Pension Fund Regulatory and Development Authority. It also includes the chairman of the Insolvency and Bankruptcy Board (IBBI).

Recently, the government through a gazette notification, had included ministry of electronics and information technology (MeitY) secretary in the FSDC in view of the increased focus of the government on digital economy.

The Council deals, inter-alia, with issues relating to financial stability, financial sector development, inter–regulatory coordination, financial literacy, financial inclusion and macro prudential supervision of the economy including the functioning of large financial conglomerates. No funds are separately allocated to the Council for undertaking its activities.

Context: The commission has announced the elections for the Lok Sabha and Assemblies to Andhra Pradesh, Orissa, Arunachal Pradesh on 10th March, 2019.  Therefore, in view of the current elections, the Commission has given one time relaxation and has reduced the notice period  from 30 days to 7 days for the parties who have published their public notice by 10th March, 2019 i.e. date of announcement of election.

As per existing guidelines, the applicant association  is  inter-alia asked to publish proposed Name of the party in two national daily news papers and two local daily newspapers, on two days in same news papers, for inviting objections, if any, with regard to the proposed registration of the party before the Commission within  a 30 days from such publication.

To be eligible for a ‘National Political Party of India,’ the Election Commission has set the following criteria:

Context: In a first, Uttar Pradesh begins otter census. Beginning in the Pilibhit Tiger Reserve, the exercise will end by the end of March, 2019.

Context: The Grey Hypocolius (Hypocolius ampelinus), a small migratory bird that usually makes its home in West Asia and North Africa and is a regular visitor to Kutch, has been sighted in Western Rajasthan for the first time on March 4, 2019. 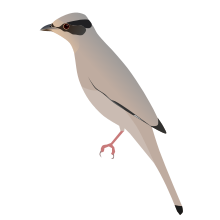