Context: The National Annual Rural Sanitation Survey (NARSS) 2018-19, conducted by an Independent Verification Agency (IVA) under the World Bank support project to the Swachh Bharat Mission Grameen (SBM-G), has found that 96.5% of the households in rural India who have access to a toilet use it.

Impact and significance of SBM:

To accelerate the efforts to achieve universal sanitation coverage and to put focus on sanitation, the Prime Minister of India launched the Swachh Bharat Mission on 2nd October, 2014.

The aim of Swachh Bharat Mission (Gramin) is to achieve a clean and Open Defecation Free (ODF) India by 2nd October, 2019.

Mains Question: The success of Swachh Bharat mission lies in the behavioural change it has managed to bring, more than anything else. Critically analyze.

Context: The Centre has notified a scheme for Transport and Marketing Assistance (TMA) for specified agriculture products that will provide assistance for the international component of freight and marketing of agricultural produce.

Impact of the scheme:

This scheme is likely to mitigate the disadvantage of higher cost of transportation of export of specified agriculture products due to trans-shipment and to promote brand recognition for Indian agricultural products in the specified overseas markets.

For Prelims and Mains: The scheme- features, significance, need and potential.

PM-SYM is a voluntary and contributory pension scheme that will engage as many as 42 crore workers in the unorganised sector.

Minimum Assured Pension: Each subscriber under the scheme will receive minimum assured pension of Rs 3000 per month after attaining the age of 60 years.

Contribution to the scheme:

Contribution by the Subscriber: The subscriber is required to contribute the prescribed contribution amount from the age of joining the scheme till the age of 60 years.

Context: Half a dozen public and private sector banks have been slapped with monetary penalties by the Reserve Bank of India for non-compliance of directions in the Swift (Society for Worldwide Interbank Financial Telecommunications) messaging system used by banks worldwide for foreign currency transfers. It is a messaging network that financial institutions use to securely transmit information and instructions through a standardized system of codes. Under SWIFT, each financial organization has a unique code which is used to send and receive payments.

SWIFT India is a joint venture of top Indian public and private sector banks and SWIFT (Society for Worldwide Interbank Financial Telecommunication). The company was created to deliver high quality domestic financial messaging services to the Indian financial community. It has a huge potential to contribute significantly to the financial community in many domains.

The United Nations Security Council (UNSC) is one of the organs of the United Nations and is charged with the maintenance of international peace and security. Its powers include the establishment of peacekeeping operations, the establishment of international sanctions, and the authorization of military action through Security Council resolutions; it is the only UN body with the authority to issue binding resolutions to member states.

India has been calling for the reform of the UN Security Council along with Brazil, Germany and Japan for long, emphasising that it rightly deserves a place at the UN high table as a permanent member. 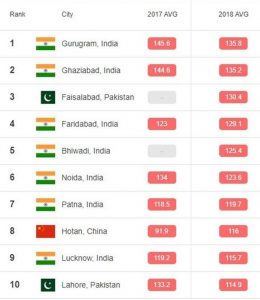 As suggested by Greenpeace, following measures can be employed to fight air pollution in the country:

For Prelims and Mains: What is Form 26, why was it introduced, it’s relevance and significance.

Context: Recently, the Law Ministry made it mandatory for election candidates to reveal their income-tax returns of the last five years, as well as the details of their offshore assets. This was done by amending Form 26, after the Election Commission of India wrote to the Ministry on February 13.

A candidate in an election is required to file an affidavit called Form 26 that furnishes information on her assets, liabilities, educational qualifications, criminal antecedents (convictions and all pending cases) and public dues, if any. The affidavit has to be filed along with the nomination papers and should be sworn before an Oath Commissioner or Magistrate of the First Class or before a Notary Public.

The objective behind introducing Form 26 was that it would help voters make an informed decision. The affidavit would make them aware of the criminal activities of a candidate, which could help prevent people with questionable backgrounds from being elected to an Assembly or Parliament.

When and how was it introduced?

Like most recent electoral reforms in India, Form 26 was introduced following a court order. The genesis of the affidavit can be traced to the 170th Report of the Law Commission, submitted in May 1999, which suggested steps for preventing criminals from entering electoral politics. One of the suggestions was to disclose the criminal antecedents as well as the assets of a candidate before accepting her nomination.

Earlier, a candidate had to only declare the last I-T return (for self, spouse and dependents). Details of foreign assets were not sought. Offshore assets, as per the February 26 notification, means “details of all deposits or investments in foreign banks and any other body or institution abroad and details of all assets and liabilities in foreign countries”. It is now mandatory for candidates to reveal their own income-tax returns of the last five years rather than only one, and the details of offshore assets, as well as the same details for their spouse, members of the Hindu Undivided Family (if the candidate is a karta or coparcener), and dependents.

Context: Exercise Al Nagah III, third in the series of bilateral joint exercise between India and Oman is scheduled to be held from 12 to 25 March 2019 at Jabel Al Akhdar Mountains in Oman.

The exercise will see both the armies exchanging expertise and experience in tactics, weapon handling and firing, with an aim to enhance interoperability in counterterrorist operations in semi urban mountainous terrain.

Summary: The section discusses about recent announcement made by US on the application of GSP, its effects on India and implications of this move.

Context: United States has decided to “terminate” India’s designation as a beneficiary of its Generalised System of Preferences (GSP).

What made US announce this?

The US observed that India has implemented a wide array of trade barriers that create serious negative effects on United States commerce. Despite intensive engagement, India has failed to take the necessary steps to meet the GSP criterion.

The US had launched an eligibility review of India’s compliance with the GSP market access criterion in April 2018, following concerns raised by its medical devices and dairy industry. The Indian government’s attempts to arrive at a “balanced” package that would address the US’s concerns and protect the Indian public’s welfare were not successful.

In 2017, India had capped prices of cardiac stents and knee implants, slashing these over 70% and 60% respectively. The move impacted US giants like Abbott, Medtronic, Boston Scientific and Stryker.

This could be a big blow for India’s competitiveness in items groups such as garments, engineering, and intermediary goods in the American market.

This could impact India’s competitiveness in items groups such as raw materials in the organic chemicals sector and intermediary goods in the US market, alongside items such as iron or steel, furniture, aluminum and electrical machinery.

How India benefitted from GSP?

India has been the biggest beneficiary of the GSP regime and accounted for over a quarter of the goods that got duty-free access into the US in 2017. Exports to the US from India under GSP — at $5.58 billion — was over 12 per cent of India’s total goods exports of $45.2 billion to the US that year. The US goods trade deficit with India was $22.9 billion in 2017.

The GSP, the largest and oldest US trade preference programme, is designed to promote economic development by allowing duty-free entry for thousands of products from designated beneficiary countries.

It aims to promote economic growth in the developing world by providing preferential duty-free entry for up to 4,800 products from 129 designated beneficiary countries and territories.

The objective of GSP was to give development support to poor countries by promoting exports from them into the developed countries. GSP promotes sustainable development in beneficiary countries by helping these countries to increase and diversify their trade with the United States. GSP provide opportunities for many of the world’s poorest countries to use trade to grow their economies and climb out of poverty.

India’s Department of Commerce feels the impact is “minimal”, given that Indian exporters were only receiving duty-free benefits of $190 million on the country’s overall GSP-related trade of $5.6 billion.

Some experts feel the move will not have a major impact on India also because it has been diversifying its market in the Latin American and the African region and its trade with countries of the Global South has also been expanding at a “very competitive pace”.

At the same time, the move could hit Indian exporters if it gives an edge to competitors in its top export categories to the US.