The development is a part of the Union Government’s effort to develop connectivity infrastructure in border areas to secure India’s defence. The proposal to build the Sela Pass comes amid concerns in the defence establishment over China’s growing assertiveness along the nearly 4,000 km-long Sino-India border. 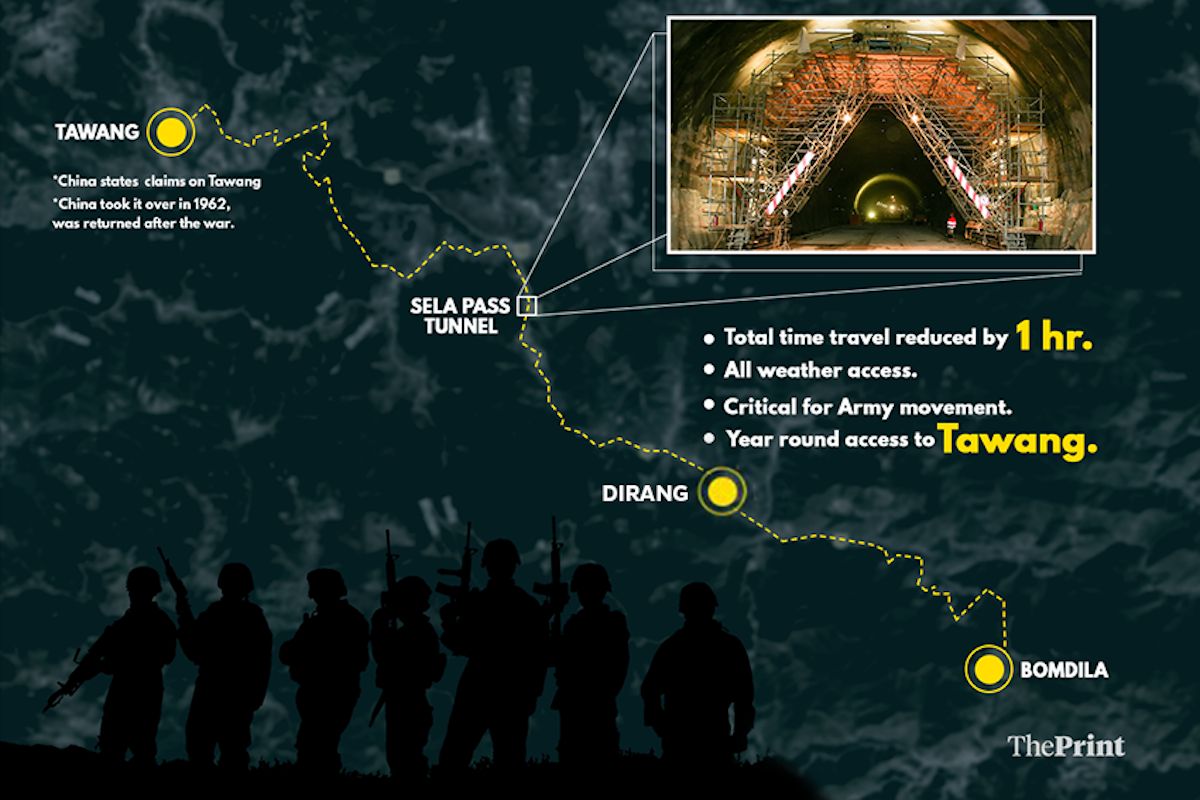 To ensure energy security, the Government of India had decided to set up 5 million metric tons (MMT) of strategic crude oil storages at three locations namely, Visakhapatnam, Mangalore and Padur (near Udupi). These strategic storages would be in addition to the existing storages of crude oil and petroleum products with the oil companies and would serve as a cushion during any external supply disruptions.

In the 2017-18 budget, it was announced that two more such caverns will be set up Chandikhole in Jajpur district of Odisha and Bikaner in Rajasthan as part of the second phase.

The construction of the Strategic Crude Oil Storage facilities is being managed by Indian Strategic Petroleum Reserves Limited (ISPRL), a Special Purpose Vehicle, which is a wholly owned subsidiary of Oil Industry Development Board (OIDB) under the Ministry of Petroleum & Natural Gas.

Mains Question: To address energy insecurity, the government of India had mooted the concept of strategic petroleum reserves in 1998. At present the demand for the same is growing stronger with each passing day. Discuss why such reserve is needed.

To give a major boost to the food processing sector by adding value and reducing food wastage at each stage of the supply chain with particular focus on perishables, the Ministry of Food Processing Industries is implementing Mega Food Park Scheme in the country.

The Mega Food Park Scheme is based on “Cluster” approach and envisages creation of state of art support infrastructure in a well-defined agri/ horticultural zone for setting up of modern food processing units along with well-established supply chain.

Common facilities and enabling infrastructure is created at Central Processing Centre and facilities for primary processing and storage is created near the farm in the form of Primary Processing Centers (PPCs) and Collection Centers (CCs). Under the Scheme, the Centre provides financial assistance up to Rs 50 crore per mega food park project.

Mains Question: Critically comment on the objectives of government’s Mega Food Park scheme and the progress made so far in establishing them.

Context: A parliamentary panel has taken strong exception to the utilisation of the Nirbhaya Fund in the construction of buildings, saying such allocations defeat the very purpose of the project — that of safety for women.

The Rs 1,000 crore Nirbhaya Fund was announced in Union Budget 2013 by the then Finance Minister P Chidambaram.

The government has been accused of keeping Nirbhaya Fund unutilised. With rise in cases of sexual harassment and crimes against women there is a crying need for implementation of such funds.

Government should improve coordination between the ministries for speedier implementation of projects under the schemes of this nature. Delay caused by lengthy inert-ministerial coordination must not be allowed to compromise women’s safety. The Government and legislators must act proactively on delivering equality and security to women.

Context: The ministry of petroleum and natural gas has launched the third bidding round under the Open Acreage Licensing Policy (OALP), offering 23 hydrocarbon blocks covering over 31,000 sq km for exploration.

India is the 3rd largest consumer of crude oil and petroleum products with oil and gas contributing 34.4% to primary energy consumption. In 2015-2016, India’s crude oil import dependence rose to 81% from 78.5%. In last five years, India has seen overall decline in exploration and production of conventional resources.

New Exploration Licensing Policy (NELP) created in 1997 ended the state dominance and created a competitive environment leading to liberalization of oil and gas exploration and production industry. However, it failed to keep the momentum of production growth and attracting the foreign investment.

Mains Question: The Hydrocarbon Exploration Licensing Policy, or HELP, is said to signal one of the most important market-oriented sectoral reforms of the past two decades. Examine why.

The scheme announced by RBI is a one-time scheme wherein a loan tenor and interest rate can be revised without classifying the asset as a NPA.

What was the issue with MSMEs?

SMEs were the worst hit among various industry segments following demonetisation and implementation of the Goods and Services Tax. Availability of credit to MSMEs declined further after the IL&FS default crisis which led to bank credit to non-banking finance companies drying up. This in turn reduced the ability of NBFCs to lend to MSMEs.

The sector was facing a liquidity problem because of lack of confidence of banks who had turned risk-averse in the wake of rising bad loans.

Significance of MSMEs and the need for creating an enabling environment:

MSMEs form an important component of the Indian economy and contribute significantly to the country’s gross domestic product, exports, industrial output and employment generation. Considering the importance of MSMEs in the Indian economy, it is considered necessary at this juncture to take certain measures for creating an enabling environment for the sector.

Mains Question: Analyze whether the slew of measures meant to aid the MSME sector to address their woes have come too little too late?

Context: The Odisha State Food Commission has again asked the State government to expedite implementation of the Forest Rights Act, 2006, that would help ensure food and nutritional security to the vulnerable section of society.

Title rights – Ownership to land that is being farmed by tribals or forest dwellers subject to a maximum of 4 hectares; ownership is only for land that is actually being cultivated by the concerned family, meaning that no new lands are granted.

Eligibility to get rights under the Act is confined to those who “primarily reside in forests” and who depend on forests and forest land for a livelihood. Further, either the claimant must be a member of the Scheduled Tribes scheduled in that area or must have been residing in the forest for 75 years.

Mains Question: Critically evaluate the promise and performance of the forest rights act.

What is it? Vat Cau is a centuries-old sport which began as a training exercise for soldiers in Vietnam and contains elements of wrestling and rugby.

Context: Abu Dhabi has included Hindi as the third official language used in its courts, alongside Arabic and English, as part of a move designed to improve access to justice.

This is aimed at helping Hindi speakers to learn about litigation procedures, their rights and duties without a language barrier.

The Indian community in the UAE, numbering 2.6 million, constitutes 30% of the total population and is the largest expatriate community.

DD Arunprabha is the Doordarshan’s second channel for the northeastern region; DD Northeast was the first one. The channel will familiarise people across India with the beauty and the culture of the State.

What is it? It is a mobile application launched by the Ministry of Textiles for quality certification in silkworm seed sector.

Background: India is the second largest producer of silk after China and the largest consumer of silk. India’s silk production capacity is expected to reach about 38,500 tonnes by 2020 from the current level of 32,000 tonnes.

Context: The Helicopter-launched anti-tank missile Helina was successfully test fired from the Integrated Test Range in Chandipur in Balasore district of Odisha.

Summary: The editorial discusses about the need for creation of good jobs, need, challenges involved and ways to do so.

The definition of a good job depends on a country’s level of economic development.

Challenges to the creation of good jobs:

Low-skilled labour force: Production is becoming increasingly skill-intensive while the bulk of the labour force remains low-skilled. This generates a gap between the types of jobs that are created and the types of workers the country has.

Technology and globalization have conspired to widen that gap, with manufacturing and services becoming increasingly automated and digitized.

Intensification of economic dualism: Every economy is divided between an advanced segment, typically globally integrated, employing a minority of the labour force, and a low-productivity segment that absorbs the bulk of the workforce, often at low wages and under poor conditions. The former one is often at the safer side.

Government policy in developed and developing countries alike is too often preoccupied with boosting the most advanced technologies and promoting the most productive firms.

But failure to generate good, middle-class jobs has very high social and political costs. Reducing those costs requires a different focus, geared specifically toward the kind of jobs that are aligned with an economy’s prevailing skill composition.

Mains Question: As one of the youngest countries in the world, going forward employment is going to be a major problem for the state. Analyze the issue and suggest how can we create employment opportunities for so many additions to the Labour Force?