For Prelims and Mains: Harvest festivals celebrated across various parts of the country and their significance.

Context: The Harvest season is on and festivities have gripped the nation from the north to down south.

Various festivals being celebrated across the Nations:

Makar Sankranti: The festival of Makar Sankranti is being celebrated today when the Sun enters the Makar zodiac and the days begin to lengthen compared to nights.

Pongal: In South India and particularly in Tamil Nadu, it’s the festival of Pongal which is being celebrated over 4 days at harvest time.

Magha Bihu: In Assam and many parts of the North East, the festival of Magha Bihu is celebrated. It sees the first harvest of the season being offered to the gods along with prayers for peace and prosperity.

Uttarayan: Gujarat celebrates it in the form of the convivial kite festival of Uttarayan.

Maghi: In Punjab, Makar Sankranti is celebrated as Maghi. Bathing in a river in the early hours on Maghi is important.

Saaji: In Shimla District of Himachal Pradesh, Makara Sankranti is known as Magha Saaji. Saaji is the Pahari word for Sankranti, start of the new month. Hence this day marks the start of the month of Magha.

Kicheri: The festival is known as Kicheri in Uttar Pradesh and involves ritual bathing.

Shakrain is an annual celebration of winter in Bangladesh, observed with the flying of kites.

Maghe Sankranti is a Nepalese festival observed on the first of Magh in the Bikram Samwat Hindu Solar Nepali calendar (about 14 January).

Context: Few recent studies have found that the practice of Devadasi system of dedicating young girls to temples as an offering to appease the gods persists not just in Karnataka, but has also spread to neighbouring Goa.

More than thirty-six years after the Karnataka Devadasis (Prohibition of Dedication) Act of 1982 was passed, the State government is yet to issue the rules for administering the law.

Concerns- highlights of the study:

Vulnerable population: Special children, with physical or mental disabilities, are more vulnerable to be dedicated as devadasis. Girls from socio-economically marginalised communities continued to be victims of the custom, and thereafter were forced into the commercial sex racket.

The devadasi system continues to receive customary sanction from families and communities.

Reporting of cases pertaining to the custom under the Karnataka law is very low, with only four cases filed between 2011 and 2017. The law is used sparingly, and focuses on prosecution (including of the victims themselves) with no framework for rehabilitation.

Loopholes: Despite sufficient evidence of the prevalence of the practice and its link to sexual exploitation, recent legislations such as the Protection of Children from Sexual Offences (POCSO) Act 2012, and Juvenile Justice (JJ) Act of 2015 have not made any reference to it as a form of sexual exploitation of children. Dedicated children are also not explicitly recognised as children in need of care and protection under JJ Act, despite the involvement of family and relatives in their sexual exploitation.

India’s extant immoral trafficking prevention law or the proposed Trafficking of Persons (Prevention, Protection and Rehabilitation) Bill 2018, also do not recognise these dedicated girls as victims of trafficking for sexual purposes. The State’s failure to enhance livelihood sources for weaker sections of society fuels the continuation of the practice.

What is Devadasi system?

Devadasi system is a religious practice whereby parents marry a daughter to a deity or a temple. The marriage usually occurs before the girl reaches puberty. In recent decades, the practice has been used to push young girls into prostitution. While various state governments have enacted laws to stop such practices, the tradition remains entrenched in some parts of the country, especially some southern states.

The practice of Devadasi system in any form is in total contravention of the provisions of Section 370 and 370A as amended through Criminal Law (Amendment) Act, 2013 as well as Section 372 of Indian Penal Code. It is also against Immoral Traffic (Prevention) Act.

Context: The Odisha government is planning to move its district mineral foundations (DMF) to its steel and mines department from the planning and convergence department. The plan to move the DMFs aims to improve implementation and use of funds.

DMFs were instituted under the Mines and Minerals (Development and Regulation) (MMDR) Amendment Act 2015 as non-profit trusts to work for the interest and benefit of persons and areas affected by mining-related operations.

The objective of District Mineral Foundation is to work for the interest of the benefit of the persons and areas affected mining related operations in such manner as may be prescribed by the State Government.

Mains Question: Odisha has become the first State in the country to issue rules for the District Mineral Foundation (DMF) – a body created to bring far-reaching changes to India’s mining regulations. Critically discuss what role DMFs can play in curbing illegal mining.

For Prelims and Mains: Formalin in fish- why is used? Its effects, measures needed and the need for complete ban.

Formalin is a toxic, colourless solution that is derived by dissolving formaldehyde gas in water.

Why is fish laced with formalin?

Fish is a highly perishable commodity. If it isn’t maintained at the proper temperature of 5 degree Celsius, it gets spoilt. To avoid that and increase its shelf life, the sellers now use chemicals such as formalin and ammonia.

In June 2018, Kerala food safety department officials seized nearly 9,600 kg of fish preserved in formalin at a border check post in Kollam district. The seized fish included 7,000 kg of prawns and 2,600 kg of other species. The seizure was part of ‘Operation Sagar Rani’ launched by the state.

Sources: Down to Earth, the Hindu.

The initiative, titled “Fair Value for Innovation”, would enable breakthrough innovation, and explore how policymakers can harness innovation capital in India and around the globe through research, advocacy, partnerships, and programs.

About the Raisina Dialogue:

This is an annual geo-political event, organised by the Ministry of External Affairs and Observer Research Foundation (ORF).

It is designed to explore prospects and opportunities for Asian integration as well as Asia’s integration with the larger world. It is predicated on India’s vital role in the Indian Ocean Region and how India along with its partners can build a stable regional and world order.

Participants: The conference is a multi-stakeholder, cross-sectoral meeting involving policy and decision-makers, including but not limited to Foreign, Defence and Finance Ministers of different countries, high-level government officials and policy practitioners, leading personalities from business and industry, and members of the strategic community, media and academia.

Significance of the event: The Raisina Dialogue was born in 2016, in the belief that the Asian century that the world was talking about was not about any exclusive geographical region. It was rather about the engagement of global actors with Asia and of Asia with the world. So this dialogue took birth as a platform, where the old and the new could work together, to discover their connections, their inter-dependence.

There are three species of crocodilians—saltwater, Mugger and Gharial.

It is the largest of all living reptiles. It listed as least concern by IUCN. It is found throughout the east coast of India.

The Gharial and Saltwater crocodile conservation programme was first implemented in Odisha in early 1975 and subsequently the Mugger conservation programme was initiated, since Odisha is having distinction for existence of all the three species of Indian crocodilians. The funds and technical support for the project came from UNDP/ FAO through the Government of India.

‘BAULA’ PROJECT AT DANGAMAL: ‘Baula’ is the Oriya term for Saltwater Crocodile. Dangmal is in Bhitarkanika sanctuary.

MUGGER PROJECT AT RAMATIRTHA: The Ramatirtha center, in Odisha, is meant for Mugger crocodiles.

Sources: Down to Earth, Wiki and IUCN.

For Prelims and Mains: Turtle festival, significance, types of turtles in India, their conservation status and programmes.

Organised by: Cox & Kings Foundation in association with Humane Society International/India and Action for Protection of Wild Animals (APOWA).

Odisha has half of the world’s Olive Ridley turtle population and 90% of India’s turtle population lives in the state. Despite that no actions have been taken for their conservation. Therefore, the government should develop some infrastructure near the turtle nesting sites at Devi and Rusikulya rivers, the two major nesting grounds.

‘Operation Kachhapa’: Conservation of the Olive Ridley Sea Turtle was launched by the Wildlife Protection Society of India in collaboration with the Orissa State Forest Department and the Wildlife Society of Orissa and other local NGOs.

To reduce accidental killing in India, the Orissa government has made it mandatory for trawls to use Turtle Excluder Devices (TEDs), a net specially designed with an exit cover which allows the turtles to escape while retaining the catch.

Hawaiian tree snail is the first extinction of 2019: 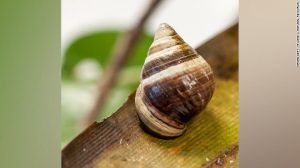 Context: In a first, the government of Delhi has proposed a specialised treatment facility for birds in the National Capital Territory, as part of its Animal Health and Welfare Policy 2018.

This setup would be developed in all the districts of Delhi in order to provide high-end specialized referral clinical support and treatment to the birds.

Context: Prime Minister Narendra Modi was awarded first ever Philip Kotler Presidential Award. He was selected for his outstanding leadership for the nation.

The Philip Kotler Presidential Award recognises and celebrates achievements of organisations, marketing teams, and individuals in different industries around the world.

Philip Kotler is a world renowned Professor of Marketing at Northwestern University, Kellogg School of Management.