Context: Parliament’s committee on estimates has in its latest report called for re-formulation of the Pradhan Mantri Fasal Bima Yojana (PMFBY), seeking transparency in its working and asking for more financial allocations to attract increasing participation from farmers. The committee has observed that there are fundamental flaws in the design of the scheme that renders it rather ineffective.

Pradhan Mantri Fasal Bima Yojana (PMFBY), the flagship programme launched with much fanfare in 2016, has run into rough weather. With both the area covered and the number of enrolled farmers declining, the country’s premium crop insurance scheme is certainly in need of an overhaul.

If states delay notifications, or payment of premiums, or crop cutting data, companies cannot pay compensation to the farmers in time.

Poor capacity to deliver: There has been no concerted effort by the state government and insurance companies to build awareness of farmers on PMFBY. Insurance companies have failed to set-up infrastructure for proper Implementation of PMFBY.

PMBY is not beneficial for farmers in vulnerable regions as factors like low indemnity levels, low threshold yields, low sum insured and default on loans make it a poor scheme to safeguard against extreme weather events. 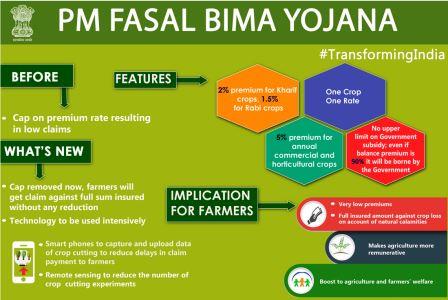 Mains Question : Examine the issues in Pradhan Mantri Fasal Bima Yojana and discuss ways through which the coverage under this scheme can be enhanced?(250 words)