Insights into Editorial: Free for all voters 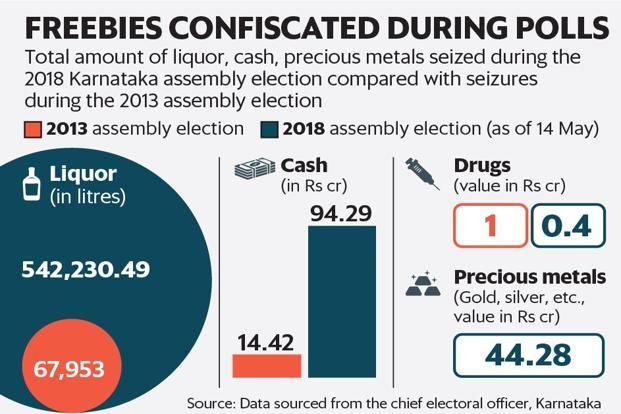 An intriguing question in political economy is how politicians get re-elected in spite of the public perception that they are corrupt.

The storied culture of feasts and gifts has thrown up the perfect excuse to devour the model code of conduct and splash out on voters here.

The distribution of freebies was unsuccessfully challenged before the Madras High Court and also before the Supreme Court in Subramaniam Balaji vs State of Tamil Nadu.

It was argued that the distribution of freebies was not only unconstitutional but also violates Section 123 of the Representation of People Act, 1951.

Section 123 defined “bribery” to include any gift, offer or promise by a candidate or his election agent or by any other person that has the effect of inducing a voter to vote for him.

Not a single party had any strategy or concrete plan to create more employment or improve the ease of doing business.

The entire focus was to simply grant loan waivers and distribute as many articles free of cost as each party could imagine.

Freebies and loan waivers will eventually bankrupt the State after State.

The Election Commission also conveyed the same view in its affidavit and expressed the view that the promise of freebies disturbs the level playing field and vitiate the electoral process.

It expressed its willingness to implement any directions of the Supreme Court in this regard.

But the Supreme Court missed the golden opportunity and merely observed that the Election Commission “should consult all political parties and issue suitable directions in this behalf”.

One can argue that Maharashtra, an industrially advanced state, has the highest debt at around Rs. 4,00,000 crore. But then most of this debt is because of industrialisation, and due to a spurt in manufacturing and services.

On the other hand, for West Bengal and to some extent in Tamil Nadu, a large component of public debt has originated from unproductive freebies.

The debt to state GDP ratio is much less for Maharashtra in comparison to West Bengal and Tamil Nadu.

Unfortunately, an increase in subsidies on non-merit goods such as freebies is going to make the fiscal deficit of any government unsustainable.

An intriguing question in political economy is how politicians get re-elected in spite of the public perception that they are corrupt.

The answer, perhaps, lies in the short-sightedness of the voter, who cares more about living in the present even at the cost of an uncertain future.

This means that freebies doled out by the incumbent government actually work. And if this is common knowledge, then logic suggests that politicians would indeed dole out freebies.

They are maximising their objective function, which is to get re-elected, often changing the nature and packaging of these freebies as the situation demands.

The Supreme Court rejected this contention on the ground that Section 123 applied only to a candidate and not to a political party.

Gifts made by a political party would not amount to a bribe and a corrupt practice.

The Supreme Court rejected all the arguments on the ground that various policy decisions to distribute mixers, grinders and fans etc., were administered through district collectors and there were sufficient checks, because government expenditure is subjected to audit by the CAG.

It upheld the distribution of freebies and it also held that it does not amount to a corrupt practice under Section 123.

If an independent candidate wants to give freebies, it would be a corrupt practice. If the candidate of a political party promises the same gift, it would not be so, because that promise was not made by him, but the inducement comes from the party.

Supreme Court missed the opportunity to interpret the Article 282:

Article 282 mandates that the Centre and State Governments can expend money only for “public purposes”. There is no bar on creating community assets.

In USA, the courts ruled that public funds cannot be used to create private assets.

If free computers are promised to public schools, it will become a public asset. No political party can use public funds and distribute them as private assets to individuals.

The Supreme Court did not refer to any of these aspects and said the distribution of freebies was a policy decision and welfare measures were in compliance with the Directive Principles.

Supreme Court also said “the reality cannot be ruled out, that distribution of freebies of any kind, undoubtedly, influences all people. It shakes the root of free and fair elections to a large degree”.

The two industries which flourished at the time of the Great Depression in the US are the liquor and film industry.

People got drunk and watched movies to forget the pain caused by unemployment. Politicians know about dreams. The time has come for us, the voters, to awaken to reality.

There is a need to make the bureaucracy and police independent. There is also a need to create a statutory, independent police commission, along the lines of the election commission, to supervise crime investigation and prosecution.

Ideally, an independent state police commissions should be created in every state. This will end political interference and curb corruption, ultimately benefiting the entire political process.

A popular perception about the reason for the increasing fortunes for politicians is corruption. To curb corruption there is a need for political, judicial and administrative reforms.

To improve governance there is a need to undertake judicial reforms too, to ensure that cases do not go on and on for many years.