For Prelims and Mains: Key recommendations made by the committee and their significance, the need for review of engineering education.

Context: A government committee headed by IIT-Hyderabad chairman B V R Mohan Reddy has submitted its report and that its suggestions are being considered by AICTE.

The committee was appointed to come up with a medium and short-term perspective plan for expansion in engineering education.

Besides, current capacity utilisation in traditional disciplines is just 40% as opposed to 60% seat occupancy in branches such as computer science and engineering, aerospace engineering and mechatronics.

Mains Question: Examine the challenges faced by higher education sector in India and discuss the impact of policy decisions taken to address these issues?(250 words)

Context: The Centre’s recently introduced ‘Ujjwala Sanitary Napkins’ initiative is being seen as an attempt to counter the ‘Khushi’ scheme launched by the Odisha State government. 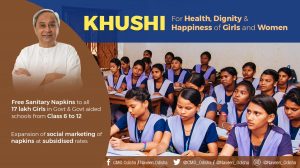 As part of its initiatives to empower women, the Odisha government, last year, launched this scheme to provide free sanitary napkins to school girls across the state.

The report provides an update of progress in achievement of 12 National Biodiversity Targets (NBT) developed under the convention process in line with the 20 global Aichi biodiversity targets.

At the 1992 Earth Summit in Rio de Janeiro, world leaders agreed on a comprehensive strategy for “sustainable development” — meeting our needs while ensuring that we leave a healthy and viable world for future generations. One of the key agreements adopted at Rio was the Convention on Biological Diversity.

The Convention on Biological Diversity is the international legal instrument for “the conservation of biological diversity, the sustainable use of its components and the fair and equitable sharing of the benefits arising out of the utilization of genetic resources” that has been ratified by 196 nations.

The 12 National Biodiversity targets of India are:

What are Aichi Targets?

The ‘Aichi Targets’ were adopted by the Convention on Biological Diversity (CBD) at its Nagoya conference. It is a short term plan provides a set of 20ambitious yet achievable targets, collectively known as the Aichi Targets. They can be divided into:

Strategic Goal A: Address the underlying causes of biodiversity loss by mainstreaming biodiversity across government and society.

Strategic Goal B: Reduce the direct pressures on biodiversity and promote sustainable use.

Strategic Goal C: To improve the status of biodiversity by safeguarding ecosystems, species and genetic diversity.

Strategic Goal D: Enhance the benefits to all from biodiversity and ecosystem services.

Context: NASA’s OSIRIS-Rex spacecraft has set a new milestone in cosmic exploration by entering orbit around an asteroid, Bennu, the smallest object ever to be circled by a human-made spaceship.

OSIRIS-Rex is the first-ever US mission designed to visit an asteroid and return a sample of its dust back to Earth. The $800 million (roughly Rs. 5,600 crores) unmanned spaceship launched two years ago from Cape Canaveral, Florida and arrived December 3 at its destination, some 70 million miles (110 million kilometres) away.

The plan is for OSIRIS-REx to orbit Bennu through mid-February, using a suite of five scientific instruments to map the asteroid in high resolution to help scientists decide precisely where to sample from.

OSIRIS-REx is the third mission in NASA’s New Frontiers program, which previously sent the New Horizons spacecraft zooming by Pluto and the Juno spacecraft into orbit around Jupiter.

Ultima Thule is located in the Kuiper belt in the outermost regions of the Solar System, beyond the orbit of Neptune. 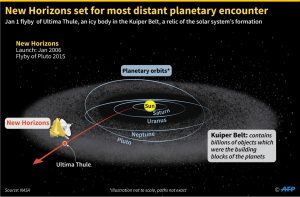 Mains Question: Write a note on the significance of NASA’s New Horizons Mission.

For Prelims and Mains: Key provisions and significance of the bill, the need for legislation on outer space.

Context: The government is likely to introduce the Space Activities Bill, 2017, which will allow commercial use of space, in the budget session of 2019.

Need for a legislation on outer space:

Mains Question: What are the salient features of the Space Activities Bill, 2017? Examine how the use of outer space by ISRO has helped common man in India.

Content: Recognizing their two countries are strategic partners, major and independent stakeholders in world affairs, the Ministers committed to work together on regional and global issues, including in bilateral, trilateral, and quadrilateral formats.

Strengthening the Defense and Security Partnership:

Partners in the Indo-Pacific and Beyond:

Observing the strong ties of family, education, and business, and the spirit of entrepreneurship and innovation that unite their people, the Ministers highlighted the unmatched people-to-people ties between their countries and recognized the benefits to both nations and the world from these ties, including the free flow of ideas and collaboration in health, space, oceans, and other areas of science and technology.

It has been agreed to establish the gas trading hub(s)/exchange(s) in the country wherein the natural gas can be freely traded and supplied through a market mechanism.

To develop the natural gas grid, Government has taken a decision to provide a capital grant of Rs. 5176 crore (i.e. 40% of the estimated capital cost of Rs. 12,940 Crore) to GAIL for development of a 2655 Km long Jaddishpur-Haldia/Bokaro-Dhamra Gas Pipeline (JHBDPL) project.

This pipeline will transport Natural Gas to the industrial, commercial, domestic and transport sectors in the States of Bihar, Jharkhand, Odisha, West Bengal and Uttar Pradesh.

The establishment of a hub is an attempt to meet operators’ demands for the adoption of a market-based gas-pricing regime. But India faces challenges in making the dream a reality, amid concerns over third-party access and competition.

The gas hub plan ties in with Prime Minister Narendra Modi’s efforts to boost the share of natural gas in India’s energy mix to 15% by 2030, from just over 6% now.

Domestic supply is also increasing. ONGC, India’s largest producer, supplied 23.5bn cubic meters of gas in the 2017-18 financial year and plans to almost double this within the next four years.

The Indian authorities, are considering overhauling the policy of fixed domestic gas prices, currently based on a formula derived from prices in the US, Canada, UK and Russia. Delhi sees itself as a potential candidate for Asia’s largest LNG trading hub, in a region that lacks accurate benchmarks reflecting Asian gas fundamentals.

India’s ranking on major global indices in 2018- a quick recap: