1) Critically analyze whether death penalty is justified in the modern times.(250 words)

Some of the activist have made representations for speedier execution of Nirbhaya case accused. This brings out the need to discuss the old topic of the pros and cons of death penalty in a modern society.

Critically analyze-  here we have to examine methodically the structure or nature of the topic by separating it into component parts, and present them as a whole in a summary. based on our discussion we have to form a concluding opinion on the issue.

The question wants us to look into the death penalty in detail and discuss why it is unwarranted in the present times and also discuss where it should be allowed. Based on our discussion we have to from a personal opinion on the issue.

Why death penalty is not the solution:-

However death Penalty is necessary sometimes due to the following reasons:

2) Judicial independence is not just independence from the government. Do you agree. Comment in the context of growing judicial activism in India.(250 words)

Some of the recent judgements of judges from various courts of India point out the pitfalls of unrestrained judicial liberty, which in itself is a product of judicial activism. The article discusses the need for judicial independence and how judicial activism affects it.

The question wants us to express our knowledge and understanding of judicial activism in India and express our opinion as to why it underlines the statement that judicial independence is not just independence from the government or the executive.

Introduction– Write a few introductory lines about the judicial activism in India. E.g mention the names of a few famous cases related to judicial activism- e.g doctrine of the basic structure of the constitution to BCCI restructuring to overseeing NRC etc.

Accountability only to oneself, however, is a very weak form of constraint. The temptation to overstep is always immense, more so when such immense power has been placed in one’s own hands. It is here that legal culture plays a critical role in establishing judicial accountability:-

Topic – Role of civil services in a democracy.

3) What do you think is the importance of civil services for a democratic country like India. Discuss.(250 words)

Discuss- this is an all-encompassing directive which mandates us to write in detail about the key demand of the question. we also have to discuss about the related and important aspects of the question in order to bring out a complete picture of the issue in hand.

The question wants us to write in detail about the role and importance of civil services for a country like India.

Introduction- write a few introductory lines about the  Civil services in India. E.g

Importance of civil services for a democracy like India :-

Topic– Part of static series under the heading – “Important aspects of governance, transparency and accountability”

4) In recent years, a lot of effort has been put into technological initiatives like digitalization. Analyze how it can help in improving transparency and governance with examples?(250 words)

Conclusion – emphasize on the role of technology in improving governance and the significant strides that we have taken in recent years.

How digitalisation improves transparency and governance:-

How to increase transparency and governance :-

5) “The progress made in Ease of Doing Business (EODB) rankings is real, but it’s time for another exercise that takes a ground-up look at our current regulatory frameworks.” Analyze in the context of regulatory architecture for MSMEs?(250 words)

The article highlights the problem of regulatory maze that surrounds the MSME sector and the challenges it creates for them. At a time when credit availability for MSMEs has been focussed on a lot, simplifying the regulatory architecture will also help in the progress of MSMEs.

Analyze  – When asked to analyze, you  have to examine methodically the structure or nature of the topic by separating it into component parts and present them as a whole in a summary.

Introduction – Highlight that India has recently made rapid strides in EODB rankings. To further improve EODB for MSMEs there is a need for relook into the regulatory architecture for MSMEs.

Conclusion – Emphasize on the importance of MSME sector for the economy and how tackling this issue would have a multiplier effect on our economy.

Ease of doing business Index does not take a look at ground work :- ( Summarise this aspect in short in the answer)

Challenges due to these regulations :-

What more needs to be done ?

6) Discuss why have conditions for workers in most parts of the world not improved commensurately given the global output recovery of recent years?(250 words)

The article discusses the fact that despite global growth seeing an upturn in recent years, wage growth for workers has not increased at the same pace. The article analyses the reasons behind it and suggests alternate policy measures. In India too, wage growth across sectors has not kept pace and hence this question will help you understand the reasons and give suggestions for improvement.

The question expects you to first highlight the status of global growth and bring out the fact that wage growth has not kept pace. Thereafter, we need to delve deeper into the issue to understand why this is so. Your analysis need not necessarily be limited to Indian situation but should also bring out the issues with neoliberal policies all around. Thereafter, we need to give suggestions for bringing about a change in status quo.

Introduction – Highlight the findings of ILO. The International Labour Organization’s (ILO) latest Global Wage Report finds that, excluding China, real (inflation-adjusted) wages grew at an annual rate of just 1.1% in 2017, down from 1.8% in 2016. That is the slowest pace since 2008.

Conclusion – Summarize your findings as regards to the reason behind falling wage growth and suggest way forward.

Why condition of labour has not improved :-

Topic– Part of  the series of Ethics Case Studies

Guidelines for the answer

Some of the questions raised by this case study include;

Take the help of these guidelines and use your own critical understanding to frame your answer.

In the era of globalization there are different standards adopted by different countries. In this light the companies take advantage of the standards set by the developing countries which are mostly inferior to the many developed countries like EU/ US.

The stakeholders involved in the above case study are the company manufacturing the soft drink , Indian government and the consumers of the soft drink.
1. Issues of integrity, ethics and law posed in this context :-

3.The Indian government need to stop the supply of inferior quality soft drink and revise the existing standards even though there are no bad effects of the drink yet visible in India. The proactive stand of the government can send a warning to the companies of not circulating inferior products in India . Also the government need to make people aware of the food safety standards for better transparency.

Soft drink company need to increase the quality of the soft drinks in India as inferior quality product can adversely impact the customers and the company itself in the long run.

Topic – Part of static series under the heading – “citizen charter”

8) Though Citizen’s charters have been formulated by many public service delivery organizations, there is no corresponding improvement in the level of citizens’ satisfaction and quality of services being provided. Analyse.(250 words)

Introduction – Explain what citizen charters are.

Conclusion – Summarize your arguments and discuss the way forward.

A Citizens’ Charter represents the commitment of the Organisation towards standard, quality and time frame of service delivery, grievance redress mechanism, transparency and accountability. The concept of Citizens Charter enshrines the trust between the service provider and its users.

The basic objective of the Citizens Charter is to empower the citizen in relation to public service delivery. 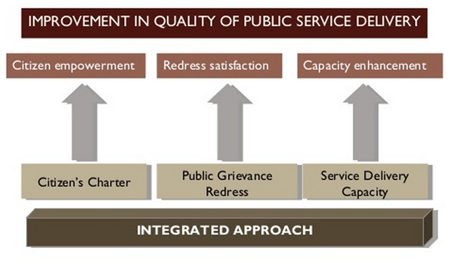 The main objective of the exercise to issue the Citizen’s Charter of an organisation is to improve the quality of public services. This is done by letting people know the mandate of the concerned Ministry/ Department/ Organisation, how one can get in touch with its officials, what to expect by way of services and how to seek a remedy if something goes wrong. The Citizen’s Charter does not by itself create new legal rights, but it surely helps in enforcing existing rights.

Despite formulation of citizen charters level of citizens satisfaction and quality of services:-