The debate for a separate time zone for the northeast has been in existence for as long as the history of modern India goes. Amidst the pros and cons of having two time zones for the country, no implementable solution has been proposed so far.

Back in October this year, the CSIR-National Physical Laboratory (CSIR-NPL) and the National Measurement Institute (NMI) of India explored the possibility and also proposed an implementable solution.

The custodian of Indian Standard Time (IST) proposed two time zones IST-I and IST-II for the country as follows:

What is a time zone?

Longitude is the angular distance between a point on any Meridian and the prime meridian in Greenwich. The time at Greenwich is called as Greenwich Mean Time (GMT). 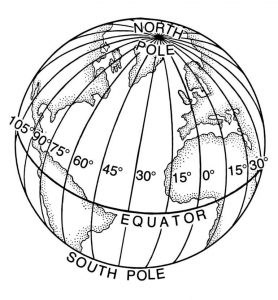 India extends from 68°7’E to 97°25’E, with the spread of 29 degrees, which amounts to almost two-hours from the geographical perspective. For decades, legislators, activists, industrialists and ordinary citizens from India’s northeast have complained about the effect of IST on their lives.

Following are the factors which compelled the people from northeast to demand a different time zone:

Loss of daylight hours and excess electricity usage. A different time zone would allow sunsets to take place later, allowing the citizens to better use their daylight hours.

Effect on biological clocks of citizens. The longitudinal extremes of the country are assigned a single time zone which not only creates the loss of daylight hours but also creates problems relating to the biological clock. 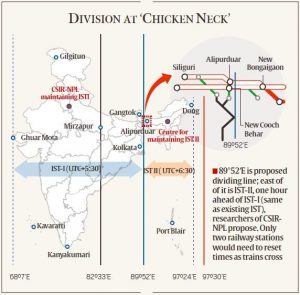 India has a huge population; if the country were divided into two time zones, there would be chaos at the border between the two zones. It would mean resetting clocks with each crossing of the time zone. There is scope for more dangerous kinds of confusion. Railway signals are not fully automated and many routes have single tracks. Trains may meet with major accidents owing to human errors. Just one such accident would wipe out any benefits resulting from different time zones in the country.

With a time difference of one hour in the mornings and in the evenings, there would be nearly 25% less overlap between office timings in the two zones. This could be important for banks, offices, industries and multinational companies which need to be constantly interconnected. This will be further detrimental to productivity and to the interests of the eastern region.

Context: Recently, Chairman of India’s largest lender State Bank of India (SBI), Rajnish Kumar, said that loan waivers are not a permanent solution; instead, he argued for an investment scheme to increase the income of farmers on similar lines of Telangana’s Rythu Bandhu.

What is Rythu Bandhu?

Aimed at relieving farmers of debt burden and cease them from falling into the debt trap again, the scheme provides a grant of Rs 4,000 per acre per farmer each season for the purchase of inputs like seeds, fertilizers, pesticides, labour and other investments in the field operations of farmer’s choice for the crop season.

Context: Ministry of Micro, Small and Medium Enterprises (MoMSME) has released its Strategy Action Plan on Unlocking the potential of MSME exports.

Despite a reasonable growth story and substantial share in overall exports, MSMEs are often faced with challenges that restrict their entry into the foreign market. Not only do these challenges need to be  studied  in  detail  but,  an  eco-system needs to be created in such a way that  these  enterprises  shall  be  able  to  participate  in  the  global  value  chain  on  its  own  and  generate  enough  economies  of  scale.

Aim: The strategy  action  plan  prepared by the Ministry aims  to create  a  sustainable  ecosystem  for  entire  MSME  development.

The action plan aims to achieve the objectives of – Finance; Access to affordable trade finance; Target of USD 100 billion of exports from India by 2020; Evaluate readiness of MSMEs to export their products and services; Recognize areas where improvements are  required  in  order  to  be  able  to  export  effectively and efficiently; Integration of MSMEs into Global Value Chain.

Governing Council: To ensure efficient and effective  delivery  of  all  MSME  export  related  interventions,  the Strategy Action Plan proposed  to  formulate  a  governing  council  that  shall  be  chaired  by  Secretary,  M/o  MSME  and  Co-chaired  by  DC,  M/o  MSME.

Problems and challenges faced by the sector:

The need of the hour is to study challenges in  detail and create an  eco-system in such a way that  these  enterprises  shall  be  able  to  participate  in  the  global  value  chain  on  their own  and  generate  enough  economies  of  scale.

Mains Question: For MSME sector, access to credit is one of the most significant challenge amongst the several challenges that the sector faces. Analyze issues related to credit availability for MSME sector and the role government is playing?

Achievements of Indian Scientists in 2018

For Prelims and Mains: Overview and significance of the Achievements.

Context: The year 2018 is ending with spectacular success of Indian scientists and technologists in the space and defence sectors, with a series of high impact missions. Several scientific developments, new techniques and promising technologies—in fields ranging from nanotechnology to space weather—made headlines during the year.

A gel that can protect farmers from toxic pesticides: It is a protective gel—poly-Oxime—that can be applied on skin and can break down toxic chemicals into safe substances, preventing farmers from going deep into the skin and organs like the brain and the lungs.

World’s thinnest material with novel technique: It is a material that is 100,000 times thinner than a sheet of paper. Researchers synthesized a two-dimensional material of just one-nanometre in thickness using Magnesium diboride—a compound of boron. This is said to be the world’s thinnest material. It can find a range of applications—from next-generation batteries to ultraviolet absorbing films.

Gene editing applied to banana genome: Using the gene editing technique—CRISPR/Cas9—researchers at the National Agri-Food Biotechnology Institute, Mohali, edited the banana genome. This is the first such work in any fruit crop in India. Banana is the fourth most important food crop after wheat, rice and corn in terms of gross value of production. Gene editing could be deployed to improve nutritional quality, agronomical important traits as well as pathogen resistance in banana.

New tool developed for autism screening: In many cases, autism is misdiagnosed as mental retardation and attention deficit hyperactivity disorder (ADHD). Early identification and interventions may help children with autistic disorders. To help this process, scientists have developed an Indian tool for screening children for autism.

Hope for Alzheimer’s and Huntington’s patients: Scientists at the Indian Institute of Science (IISc), Bengaluru, have figured out the way memory deficit develops in early stages, resulting in Alzheimer’s disease. They have found that early breaking down of a protein, fibrillar actin or F-actin, in the brain leads to disruption in communication among nerve cells and consequently memory deficits.

Green technique can address plaster of Paris pollution: A team of scientists at Pune-based National Chemical Laboratory (CSIR-NCL) has developed a technique that helps recycle plaster of Paris waste from hospitals in an eco-friendly and economical way. The new technique disinfects waste and converts it into useful products like ammonium sulphate and calcium bicarbonate. The technique can also be used to disintegrate PoP waste from idols immersed in water bodies.

Stone Age tools, genetic studies throw new light on early civilisation in India: The Stone Age tools discovered in a village near Chennai suggest that a Middle Palaeolithic culture was present in India around 385,000 years ago—roughly the same time that it is known to have developed in Africa and in Europe. The discovery pushes back the period when populations with a Middle Palaeolithic culture may have inhabited India, and challenges popular theory that the Middle Palaeolithic was brought to India by modern humans dispersing from Africa only around 125,000 years ago or later.

Sikkim gets real-time landslide warning system: A real-time landslide warning system has been set up in the Sikkim-Darjeeling belt of north-eastern Himalayas which is highly vulnerable to landslides. The warning system consists of over 200 sensors that can measure geophysical and hydrological parameters like rainfall, pore pressure and seismic activities. The system is capable of warning about 24 hours in advance. It has been deployed by researchers of Kerala-based Amrita University and Sikkim State Disaster Management Authority.

Scientists use silk polymer to develop artificial vertebral disc: Scientists at Indian Institute of Technology, Guwahati, developed a silk-based bioartificial disc that may find use in disc replacement therapy in future. The group has developed a fabrication procedure for a silk-based bioartificial disc adopting a “directional freezing technique”. The disc mimics internal intricacy of human disc and its mechanical properties too are similar to those of the native ones. The use of a silk biopolymer to fabricate a biocompatible disc can reduce the cost of artificial discs in future.

Mains Question: Highlight the Achievements of Indian Scientists in the year 2018 and their significance for the society.

Context: A recently-declassified study of the Central Pollution Control Board (CPCB) states that mobile towers do not have any negative effect on human health.

In international standards, “thermal effect” of radiation refers to the heat that is generated due to absorption of microwave radiation which causes cellular and physiological changes in living beings. This effect may be responsible for genetic defects, effects on reproduction and development, central nervous system behaviour and many similar serious health consequences.

Non-thermal effects of radiation have been shown to be responsible for fatigue, irritability, headaches, nausea, loss of appetite, sleep disturbance, disruption and other psychological disorders, memory loss and difficulties in concentration.

The International Commission on Non-Ionizing Radiation Protection (ICNIRP) is an international commission specialized in non-ionizing radiation protection. The organization’s activities include determining exposure limits for electromagnetic fields used by devices such as cellular phones.

ICNIRP is an independent non-profit scientific organization chartered in Germany. It was founded in 1992 by the International Radiation Protection Association (IRPA) to which it maintains close relations.

The mission of ICNIRP is to screen and evaluate scientific knowledge and recent findings toward providing protection guidance on non-ionizing radiation, i.e. radio, microwave, UV and infrared.

The Prime Minister Narendra Modi, dedicated the Bogibeel bridge in Assam, to the nation. Additionally, on the northern bank of the Brahmaputra, the Prime Minister also flagged passenger train passing through the bridge.

Significance of the Bridge:

Since Dibrugarh is an important centre of healthcare, education and commerce in the region, and the people living north of the Brahmaputra, can now access this city, more conveniently.

Construction of the Bogibeel Bridge was agreed by the government as part of a 1985 agreement to end years of deadly agitation by Assamese nationalist groups.

The Bogibeel Bridge, which will have a serviceable period of around 120 years, is India’s only fully welded bridge for which European welding standards were adhered to for the first time in the country.

Context: Haryana has renamed child care institutes being run in the state as Jagannath Ashrams.

Why? Since all child care institutions have a similar goal of all-round development of children, it would be appropriate to give a single name.

India’s first music museum to be set up in Thiruvaiyaru:

Context: The country’s first music museum will be set up with assistance from the Central government in Thiruvaiyaru, Tamilnadu, the birth place of Saint Tyagaraja, one of the Trinities of Carnatic music. The other two of the Trinity are Muthuswami Dikshitar and Syama Sastri.

Carnatic music, is a system of music commonly associated with South India, including the modern Indian states of Andhra Pardesh, Telangana, Karnataka, Kerala, and Tamil nadu as well as Sri Lanka . The main emphasis in Carnatic music is on vocal music; most compositions are written to be sung, and even when played on instruments, they are meant to be performed in gyaki (singing) style.