Insights into Editorial: Towards a genetic panopticon 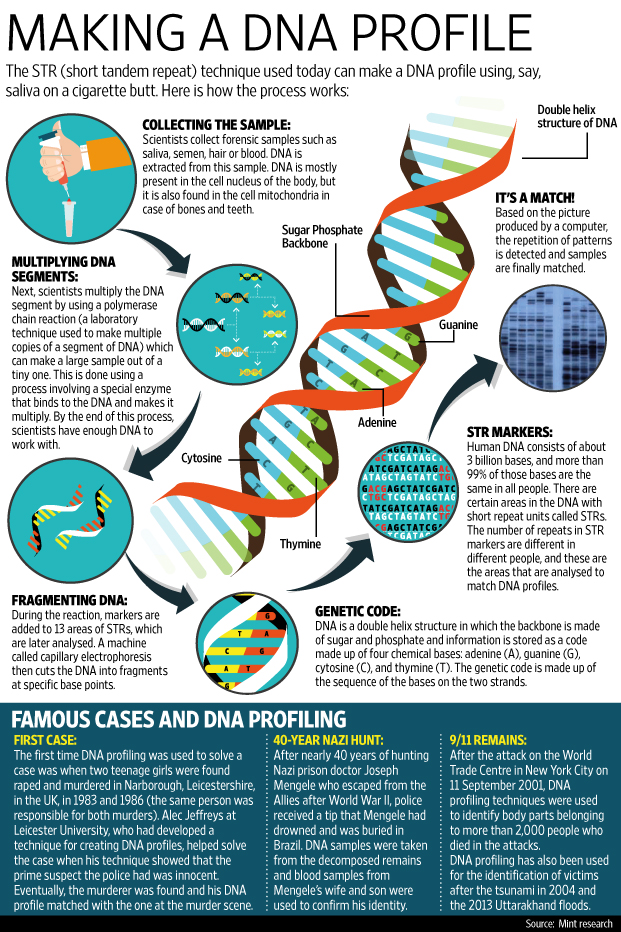 The government’s rejection for dissent, though, makes the potential introduction of the DNA Technology (Use and Application) Regulation Bill, 2018, for consideration by the Rajya Sabha an especially discriminatory proposition.

The Bill regulates the use of DNA technology for establishing the identity of persons in respect of matters listed in a Schedule.

These include criminal matters (such as offences under the Indian Penal Code, 1860), and civil matters such as parentage disputes, emigration or immigration, and transplantation of human organs.

The DNA Technology (Use and Application) Regulation Bill, 2018:

The Bill regulates the use of DNA technology for establishing the identity of persons in respect of matters listed in a Schedule.

Benefits of DNA based technologies:

Forensic DNA profiling is of proven value in solving cases involving offences that are categorized as affecting the human body (such as murder, rape, human trafficking, or grievous hurt), and those against property (including theft, burglary, and dacoity).

The aggregate incidence of such crimes in the country, as per the statistics of the National Crime Records Bureau (NCRB) for 2016, is in excess of 3 lakhs per year.

Of these, only a very small proportion is being subjected to DNA testing at present.

It is expected that the expanded use of this technology in these categories of cases would result not only in speedier justice delivery but also in increased conviction rates, which at present is only around 30% (NCRB Statistics for 2016).

However, there are Problems with the draft Bill:

As a result, the state will effectively have at its disposal the ability to profile every one of its citizens.

It’s been reported previously, for instance, that the Centre for DNA Fingerprinting and Diagnostics, whose director will occupy an ex-officio place in the DNA Regulatory Board, already seeks information on a person’s caste during the collection of genetic material.

To enact the law in its present form, therefore, would only add a new, menacing weapon to the state’s rapidly expanding surveillance mechanism.

We cannot allow the benefits of science and technology to be privileged over the grave risks in allowing the government untrammelled access to deeply personal and penetrating material.

In countries like UK, DNA data of a recordable offence can be kept for only six year. This can also be adopted in India for better results.

The Law Commissions report related to scientific collection of data need to be incorporated. Maintenance of strict confidentiality with regard to keeping of records of DNA profiles and their use as recommended by Malimath report can be followed.