Context: The latest information obtained by an activist under the Right to Information (RTI) has revealed that Mumbai-Ahmedabad bullet train project may turn out to be a loss-making proposition and burden Maharashtra’s already dwindling finances.

Concerns over the project:

Both Planning and Finance departments have called for a thorough study of bullet train economics in other countries before a decision is taken on its feasibility in India. Additionally, the departments said the Centre must clarify the formula for sharing the loan burden if the project remains loss-making for a long period of time. Since the State is coping with serious loss in income and further burden of loans, the impact of this project on government finances needs to be considered.

The train, with a capacity of 750 passengers, will travel at speeds between 320 km/hr and 350km/hr and is expected to reduce travel time between Ahmedabad and Mumbai to three-and-a-half hours or less from the present eight. The project is expected to be completed in seven years. 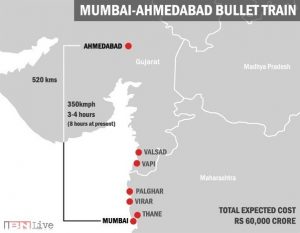 How India benefits from bullet train?

High-speed connectivity – This will facilitate economic growth. Smaller cities along the way can also be connected with high-speed transit facility to these economic Centres through the bullet train network.

The bullet train project is expected to create 4,000 direct job opportunities, along with 20,000 indirect jobs. 20,000 construction workers will also be employed during the set up period of Ahmedabad-Mumbai bullet train.

Urban expansion – New bullet train stations set to come up along the route will attract urban growth. This will again shift the pressure of urbanisation from the existing urban Centres.

Open new avenues – When completed, the Ahmedabad-Mumbai bullet train project will present as a favorable destination for high-speed train technologies, attracting other parties working in the field.

The geostrategic importance of Bullet trains is:

Mains Question: Investment in infrastructure development has always acted as a catalyst in the economic growth of India. Does huge investments in bullet trains yield dividends to India? Examine.