Context: Buddhist site museum has been inaugurated at Lalitgiri in Odisha. Excavations at Lalitgiri have yielded ancient seals and inscriptions.

It is a major Buddhist complex in the Indian state of Odisha comprising major stupas, ‘esoteric’ Buddha images, and monasteries (viharas), one of the oldest sites in the region.

Together with the Ratnagiri and Udayagiri sites, Lalitagiri is part of Puspagiri University located on top of hills of the same names. The three complexes are known as the “Diamond Triangle”. Tantric Buddhism was practiced at this site.

Excavations at Lalitgiri have yielded the remains of four monasteries, showing cultural continuity from the post-Mauryan period till the 13th century CE. The centre of attraction is a relic casket containing corporal remains found inside the Mahastupta.

Location: It is hemmed between the Parabhadi and Landa sandstone hills in the standalone Assian hill range. It is situated in the Mahanga Tahsil in Cuttack district.

For Prelims and Mains: PCR- features, need, significance and the recommendations made by Deosthalee committee.

Context: The Reserve Bank of India has shortlisted six major IT companies, including TCS, Wipro and IBM India, to set up a wide-based digital Public Credit Registry (PCR) to capture details of all borrowers and wilful defaulters. The RBI will soon seek request for proposal from the six vendors.

The proposed PCR will also include data from entities like market regulator Sebi, the corporate affairs ministry, Goods and Service Tax Network (GSTN) and the Insolvency and Bankruptcy Board of India (IBBI) to enable banks and financial institutions to get a 360-degree profile of the existing as well as prospective borrowers on a real-time basis.

A central repository, which, for instance, captures and certifies the details of collaterals, can enable the writing of contracts that prevent over-pledging of collateral by a borrower. In absence of the repository, the lender may not trust its first right on the collateral and either charge a high cost on the loan or ask for more collateral than necessary to prevent being diluted by other lenders. This leads to, what in economics is termed as, pecuniary externality – in this case, a spillover of one loan contract onto outcomes and terms of other loan contracts.

Furthermore, absent a public credit registry, the ‘good’ borrowers are disadvantaged in not being able to distinguish themselves from the rest in opaque credit markets; they could potentially be subjected to a rent being extracted from their existing lenders who enjoy an information monopoly over them. The lenders may also end up picking up fresh clients who have a history of delinquency that is unknown to all lenders and this way face greater overall credit risk.

The Reserve Bank of India (RBI) had formed a high-level task force on public credit registry (PCR) for India. The task force was chaired by Y M Deosthalee.

The task force has suggested the registry should capture all loan information and borrowers be able to access their own history. Data is to be made available to stakeholders such as banks, on a need-to-know basis. Data privacy will be protected.

Context: Over the past few weeks, several startups have reportedly been receiving notices from the I-T department asking them to clear taxes on the angel funding they raised, and in some cases, levying a penalty for not paying Angel Tax.

What is Angel Tax?

Angel Tax is a 30% tax that is levied on the funding received by startups from an external investor. However, this 30% tax is levied when startups receive angel funding at a valuation higher than its ‘fair market value’. It is counted as income to the company and is taxed.

The tax, under section 56(2)(viib), was introduced by in 2012 to fight money laundering. The stated rationale was that bribes and commissions could be disguised as angel investments to escape taxes. But given the possibility of this section being used to harass genuine startups, it was rarely invoked.

Why is Angel tax problematic?

There is no definitive or objective way to measure the ‘fair market value’ of a startup. Investors pay a premium for the idea and the business potential at the angel funding stage. However, tax officials seem to be assessing the value of the startups based on their net asset value at one point. Several startups say that they find it difficult to justify the higher valuation to tax officials.

Context: Odisha cabinet has approved the Krushak Assistance for Livelihood and Income Augmentation (KALIA) scheme, worth over Rs. 10,000 crore, for the development of farmers in the state.

The KALIA is historic and it will further accelerate agricultural prosperity in the state and reduce poverty. It is a progressive and inclusive scheme and will make a direct attack on poverty by way of massive investment in this sector and making benefits reach the most needy through Direct Benefit Transfer (DBT) mode.

For Prelims and Mains: National Mathematics Day- facts and significance.

Context: National Mathematics Day is celebrated every year on December 22.

In 2011, on the 125th anniversary of his birth, the Indian Government declared that 22 December will be celebrated every year as National Mathematics Day.

Context: NASA’s New Horizons spacecraft, the same craft that made humanity’s first-ever visit to Pluto in 2015, is approaching its next target, a Kuiper Belt object a billion miles beyond Pluto, nicknamed Ultima Thule. It will be another first for New Horizons, the farthest planetary flyby in human history.

For Prelims and Mains: About Super- Earth and Constellation Cassiopeia.

Context: Researchers have discovered a new exotic planet outside our solar system in the constellation Cassiopeia. Located 21 light years away from us, this planet, dubbed HD219134 b, has a mass almost five times that of Earth, which is considered a so-called “super-Earth”. Unlike the Earth, however, it most likely does not have a massive core of iron, but is rich in calcium and aluminium alongside magnesium and silicon.

What is a Super- Earth?

A super-Earth is an extrasolar planet with a mass higher than Earth’s, but substantially below those of the Solar System’s ice giants, Uranus and Neptune, which are 15 and 17 times Earth’s, respectively.

The term “super-Earth” refers only to the mass of the planet, and so does not imply anything about the surface conditions or habitability.

For Prelims and Mains: Hongyun project- scientific objectives and significance of the project.

Context: China has launched its first communication satellite to provide broadband internet services worldwide. The satellite is the first in the Hongyun project planned by China Aerospace Science and Industry Corp (CASIC).

The Hongyun project, started in September 2016, aims to build a space-based communications network to provide broadband internet connectivity to users around the world, especially those in the underserved regions.

When the Hongyun project is complete, it will cover the whole world and offer round-the-clock communication services to users in polar regions, who now have difficulties accessing telecommunication and internet services, even from on board an aircraft or a ship or in a remote area.

Mars Express Mission was launched back in June 2003 and entered orbit around the red planet in December of the same year. Since then, the probe has been surveying the surface of Mars using a high resolution camera as well as other tools like radars and spectrometers. Context: Prime Minister Narendra Modi has announced the institution of a new national honour for National Unity on the pattern of Padma Awards. The annual award would be given to any Indian who has contributed to national unity in any manner.

Context: Both sides of Indonesia’s Sunda Strait – Java on the east and Sumatra on the west – have been hit by a tsunami. The tsunami is believed to have been caused by undersea landslides from volcanic activity.

Indonesia’s climatology agency (BMKG) said undersea landslides triggered by an eruption of the Mount Anak Krakatau volcano, located about 50km offshore in the Sunda Strait between the islands of Java and Sumatra, may have triggered the tsunami. 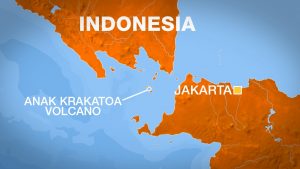