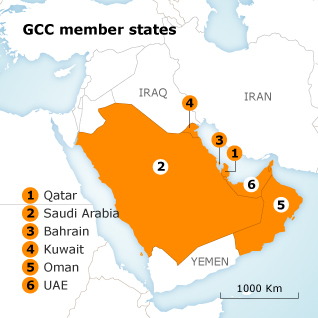 Qatar Emir Sheikh Tamim bin Hamad al-Thani’s decision to stay away from the December Gulf Cooperation Council summit in Riyadh is the latest reminder of the growing disunity among the Gulf countries.

Qatar, blockaded by three GCC countries, Saudi Arabia, the UAE and Bahrain, and their non-GCC allies, has said it will not discuss a compromise unless the blockade is lifted.

The GCC was established in Riyadh, Saudi Arabia, in May 1981. The purpose of the GCC is to achieve unity among its members based on their common objectives and their similar political and cultural identities, which are rooted in Arab and Islamic cultures.

GCC agreements typically focus on either security or economic coordination.

Qatar is a major point of contention. On 5 June 2017, Saudi Arabia, the UAE and Bahrain cut diplomatic ties with the tiny emirate.

Egypt, not part of the GCC, also joined the Saudi-led blockade. Saudi Arabia justified the move by claiming that Qatar was supporting extremist groups such as al-Qaeda and Iranian-sponsored militias in the region.

Now the gulf is widening between GCC Countries:

Oman continues to keep ties open with Qatar and Iran. The blockade made Qatar more independent in foreign policy decisions.

Qatar also strengthened its alliance with Turkey, which stepped in as provider of security for Doha.

And Turkey checkmated any plans that Saudis and Emiratis might have had to use force to bring the Qatari emir down on his knees.

Saudi Arabia is upset that Oman and Kuwait did not join the embargo. Kuwait is in fact trying to mediate.

Qatar stepped up assistance for Hamas in Gaza strip.  It accelerated a plan to allow Turkey to set up military camp in the country.

Level of US influence in the Middle East:

The disarray within the GCC undoubtedly calls attention to the decline of US influence in the Middle East region.

At the end of the day, the Gulf states have not paid heed to repeated US entreaties for GCC unity.

Ideally, GCC should have provided today for the US strategy a strong platform for launching the regime change project against Iran.

On the contrary, GCC is split down the middle, with Qatar, Oman and Kuwait getting along just fine with Tehran.

India’s priorities in the Gulf: Energy security and Trade & Investment:

Once upon a time, it talked about a common Gulf currency and robust connectivity projects.  Now, after the GCC Summit, it merely issued a customary statement.

If the GCC disintegrates due to these contradictions, Saudi Arabia will be the big loser, because it will be a reflection on its regional leadership.

After the summit, the GCC issued a customary statement, emphasising regional stability and economic challenges.

The decision of Qatar to quit OPEC and the absence of Emir at the GCC points to increasingly confident Qatar.  Intra-Gulf quarrels dampened hopes for the integration of the region.

While addressing the summit in Riyadh, the Emir of Kuwait, Sheikh Sabah Al Ahmad hit the nail on the head when he said, “The most dangerous obstacle we face is the struggle within the GCC.”