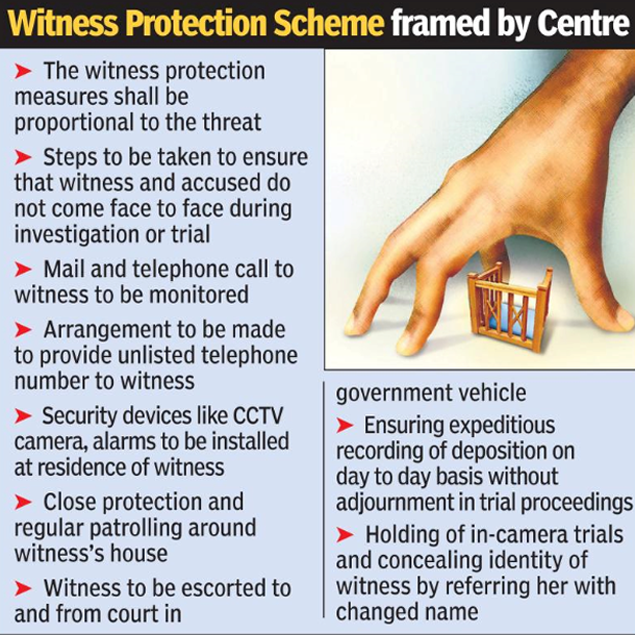 The Supreme Court approved the Centre’s draft witness protection scheme and asked all the states to implement it till Parliament comes out with a legislation.

The issue of witness protection scheme had cropped up earlier when the top court was hearing a public interest litigation (PIL) seeking protection for witnesses in rape cases involving Asaram Bapu.

The witnesses, being eyes and ears of justice, play an important role in bringing perpetrators of crime to justice.

The draft witness protection scheme, finalised in consultation with the National Legal Services Authority (NALSA) and Bureau of Police Research and Development (BPRD), has three categories of witnesses based on the threat perception.

Delhi has become the first state in the country to announce a scheme for witness protection. The state government notified the Delhi Witness Protection Scheme, 2015.

The government will make budgetary provisions in its annual budget for implementation of the scheme.

Witnesses under three categories will be provided protection, depending on the threat perception.

The categories have been draw up based on type of threat and duration for which the protection has to be given. For instance, if there is a threat to life and it affects the day-today activities of a witness for a substantial period during the investigation.

Law Commission’s recommendation in 2006 that the Centre and the States share the cost equally.

Basic features such as in camera trial, proximate physical protection and anonymising of testimony and references to witnesses in the records are not difficult to implement.

The real test will be the advanced forms of identity protection: giving witnesses a new identity, address and even ‘parentage’, with matching documents.

All this needs to be done without undermining their professional and property rights and educational qualifications.

The introduction of the scheme marks a leap forward.

Until now, there have been ad hoc steps such as those outlined for concealing the identity of witnesses in anti-terrorism and child-centric laws.

It is gratifying that the court has played a proactive role in getting the Centre and the States to come up with a concrete proposal.

The Centre deserves credit for coming forward to suggest that its draft witness protection scheme be introduced by judicial mandate instead of waiting for formal legislation.

However, expanding such facilities and implementing a comprehensive and credible witness protection programme will pose logistical and financial challenges.

It will be well worth the effort, as the scheme could help strengthen India’s tottering criminal justice system.

Section 195 A of the Indian Penal Code deals with witness protection.

In 2006, the Law Commission of India, in its 198th report, provided for a draft witness protection law.

The draft of the Witness Protection Scheme, 2018 states that it is the first attempt at the national-level to holistically provide for the protection of the witnesses, which will go a long way in eliminating secondary victimization.

This scheme attempts at ensuring that witnesses receive appropriate and adequate protection.

This will go a long way in strengthening the criminal justice system in the country and will consequently enhance national security scenario.