Insights into Editorial: Leave them alone: on the Sentinelese 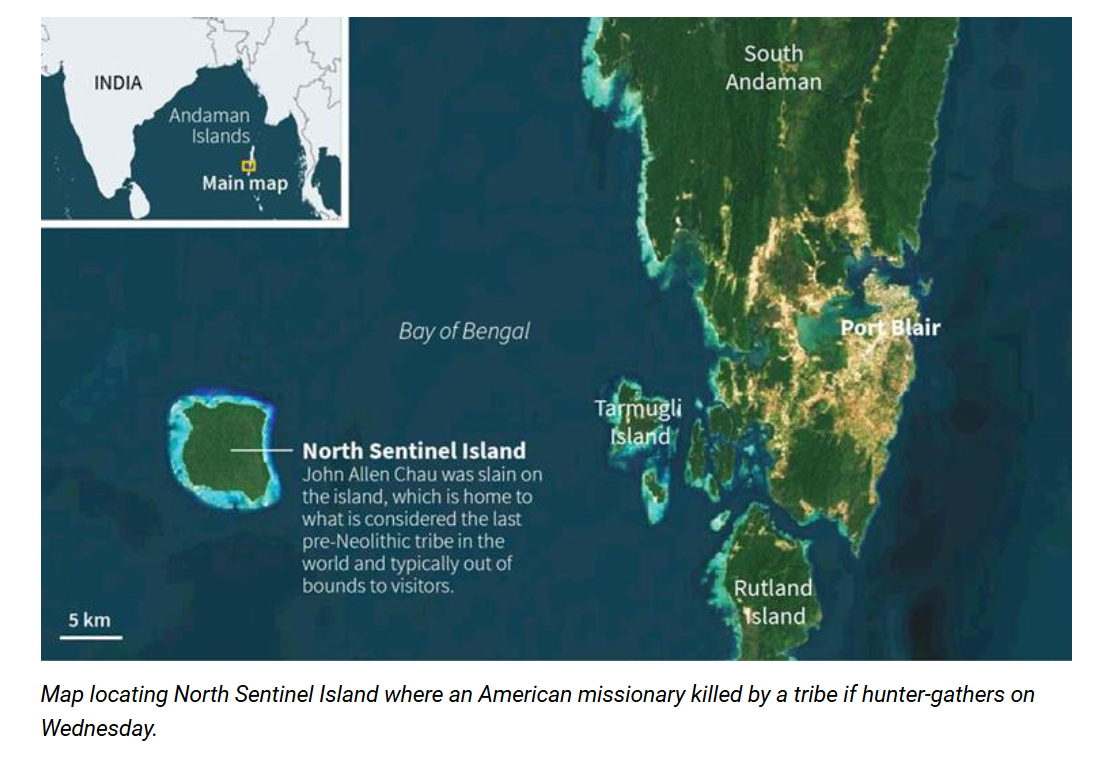 An American is reported to have been killed with arrows by the tribal people of a restricted island of Andaman.

The Sentinelese people who live in the small forested island are known to resist all contact with outsiders, often attacking anyone who comes near.

The Sentinelese, a negrito tribe who live on the North Sentinel Island of the Andamans, have not faced incursions and remain hostile to outsiders.

The inhabitants are connected to the Jarawa on the basis of physical, as well as linguistic similarities.

Based on carbon dating of kitchen middens by the Anthropological Survey of India, Sentinelese presence was confirmed in the islands to 2,000 years ago. Genome studies indicate that the Andaman tribes could have been on the islands even 30,000 years ago.

The Sentinelese are pre-Neolithic people, who have inhabited North Sentinel Island for an estimated 55,000 years, without contact with the outside World.

The Sentinelese and other aboriginal tribes are protected under the “Andaman and Nicobar Protection of Aboriginal Tribes Regulation, 1956”.

Having lived in isolation in an island in the Bay of Bengal for thousands of years, the Sentinelese have no immunity or resistance to even the commonest of infections.

They are short statured possibly due to the “island effect” that causes genetic limitation over time.

Various degrees of protection are in place for the indigenous people of A&N Islands, but it is complete in the case of the Sentinelese.

How are they protected?

The Govt. of India issued the Andaman and Nicobar Islands (Protection of Aboriginal Tribes) Regulation, 1956 to declare the traditional areas occupied by the tribes as reserves, and prohibited entry of all persons except those with authorisation.

Photographing or filming the tribe members is also an offence. The rules were amended later to enhance penalties. But restricted area permits were relaxed for some islands recently.

The Sentinelese are perhaps the most reclusive community in the world today. Their language is so far understood by no other group and they have traditionally guarded their island fiercely, attacking most intruders with spears and arrows.

Arrows were fired even at a government aircraft that flew over the island after the 2004 Tsunami.

The Ministry of Tribal Affairs is implementing a scheme namely “Development of PVTGs” which covers the 75 identified PVTGs among Scheduled Tribes in 18 States / UT of Andaman & Nicobar Islands.

Priority is also assigned to PVTGs under the schemes of Special Central Assistance (SCA) to Tribal Sub-Scheme(TSS), Grants under Article 275(1) of the Constitution, Grants-in-aid to Voluntary Organisations.

Criteria was Categorized by Ministry of Home Affairs:

This is despite laws like the Andaman and Nicobar Protection of Aboriginal Tribes Regulation (1956). There is a Andaman Adim Janjati Vikas Samiti, a special policy for Jarawas framed in 2004 and a dedicated Protection Police.

Declining Immunity of tribal resulted in their declining population:

A large chunk of the population of the 10 Great Andamanese tribes was wiped out after the indigenous peoples caught syphilis, measles, and influenza on an epidemic scale following contact with the early settlers.

Between 1998 and 2004, when the Jarawa started to respond to the state, all government hospitals bordering their reserve opened special wards to treat them for infections.

The government gave up in the mid-1990s, and in order to safeguard their health and sovereignty, decided that no one could enter a 5-km buffer zone around their island, which was already out of bounds.

There are more than 100 uncontacted tribes around the World and most of them are in Amazon forest of South America and New Guinea, an island off Australia.

North Sentinel Island was a protected area and not open to tourists. “The exact population of the tribe is not known, but it is declining. The government has to protect them.”

Poachers are known to fish illegally in the waters around the island, catching turtles and diving for lobsters and sea cucumbers.

Various degrees of protection are in place for the indigenous people of A&N Islands, but it is complete in the case of the Sentinelese. The administration enforces “an ‘eyes-on and hands-off’ policy to ensure that no poachers enter the island”.

As President Pranab Mukherjee said in 2014, it is the job of the Indian state “to protect them in their own environment and in their own circumstances”.

It is also an lesson for the country to embrace its human heritage in all its diversity, and to empathetically try to see the world from the eyes of its most vulnerable inhabitants.

The Prime Minister’s forthcoming visit to the Andaman and Nicobar Islands and the announcement of new projects for “holistic” development take a context-sensitive “island view” of development and recognise settlers and PVTGs as equal stakeholders in a common sustainable future.