World War I was a ‘Great War’. From 1914 to 1918 it embroiled various regions like most of the nations of Europe (France, Great Britain, Germany, etc), the middle East, Russia and from 1917 the United States. The ‘Central powers’ (Germany, Austria-Hungary and Turkey) were defeated against the ‘Allies’ (France, Great Britain, Russia, Italy, Japan and United States). WW I was one of the greatest watersheds of the 20th century geopolitical history. It led to the fall of 4 great imperial dynasties (Germany, Russia where Bolshevik revolution was triggered, Austria-Hungary and Turkey) and destabilised European society. Seeds of World War II were also sown.

The war also saw the role of Indian Army that battled distinctly at a time when India was under the British colonial rule.

Map showing Central and Allied Powers during WW I

INDIAN ARMY DURING WW I

TIMELINE OF ARMY IN INDIA DURING BRITISH RULE

They were engaged in wars to extend British control in India (Mysore, Maratha and Sikh Wars) and beyond (Burma, Afghan and Opium Wars)

The Crown took over the Presidencies Army after the Indian Rebellion of 1857.

By QUEEN VICTORIA’S PROCLAMATION OF 1858 Indian administration was to be placed under the British crown. Also, the annexation of Indian states by Doctrine of Lapse was renounced.

They were engaged in both the World Wars.

British Army in India consisted of British Army units posted to India for a tour of duty.

TIMELINE OF WORLD WAR I 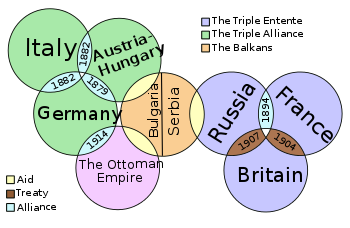 European diplomatic alignments shortly before the WW I

CAUSES OF WW I:

The World War I was a very costly affair that led to use of various new weapons in war (tanks, submarines, U-boats, poison gas, aeroplanes and long-range artillery) and high number of casualties. Downfall of monarchies in Germany, Turkey, Austria-Hungary and Russia occurred. USA emerged as a superpower and Japan became a powerful country in Asia. The tough restrictions imposed on Germany after WW I became a major cause for another World War. Thus, the race for power and growth engaged the world in such great powers which shall be prevented from occurring to save the high number of losses they ultimately lead to.

To what extent can Germany be held responsible for causing the two world wars? Discuss critically.

What was/ were the object/objects of Queen Victoria’s proclamation (1858)?

Select the correct answer using the codes given below

The Rowlatt Act aimed at